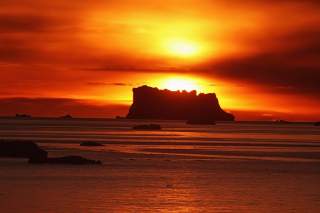 A theme of President Donald Trump’s campaign was that US diplomacy had failed. The world no longer respected the United States as it should, and that he could do a better job. Certainly, diplomacy took a hit under President Obama. While Obama and his secretaries of state, Hillary Clinton and John Kerry, sought to revitalize multilateralism and respect for international agreements against the perception that George W. Bush was too unilateral and distrustful of agreements, a lasting legacy of the Obama years was a broad sense that the United States did not respect its allies.

Trump and Secretary of State Tillerson already appear prepared to change that with regard to Israel, Egypt, and perhaps Saudi Arabia, but while it might seem peripheral to the world stage, Trump might also signal the value of alliance by making Greenland right.

Here’s the backdrop to the story: During World War II, the United States built what became the Sondrestrom Air Base at Kangerlussuaq in west central Greenland and the Bluie West One airfield which was later rechristened the Narsarsuaq Air Base, near Greenland’s southern tip. These were the first bases but far from the last. During the Cold War, Denmark—which is suzerain over Greenland—allowed the United States to construct a number of other air fields, bases, radar facilities, and meteorological outposts. Best known is Thule, a US Air Base in northwestern Greenland still in operation. Secretly, however, the U.S. military built other bases. While US Army Camp TUTO was known to those flying in and out of Thule, the U.S. Army built Camp Fistclench 200 miles to the east which itself was a prototype for Camp Century, a facility for up to 200 soldiers buried deep under Greenland’s ice cap. Here, for example, is a fascinating paper from more than 50 years ago talking about the concept and history of this unique Greenland base.

It’s become a rite of passage for politicians to travel to Greenland in order to visit Jakobshavn Glacier, near Ilulissat. Jakobshavn—also called Sermeq Kujalleq—is known as the world’s fastest glacier. Politicians say that the speed by which icebergs break away from the glacier show how great a threat warming has become. Few politicians seem willing to acknowledge that just a few kilometers away lies Sermeq Avannarleq (“the dead glacier”) which has virtually stopped. Still, the climate changes however unevenly and, in the case of Greenland, it has exposed waste left by the United States military at its Greenland bases—especially Camp Century—during the Cold War.

During the Eisenhower-era, military officials might have believed that chemical and nuclear waste buried under the ice cap would be entombed forever, but they were wrong. Now, not only the autonomous government in Greenland, but also the Danish government want the United States to clean up its mess. The American Geophysical Union has a good summary, here.

Regardless, while bureaucracies might specialize in shirking responsibility and avoiding accountability, cleaning up the US mess would be the right thing to do. Trump is correct that alliances are not one-way relationships. As for Greenland, Russia’s rise reinforces its strategic importance. So too do its resources—something the Chinese are already salivating over. China may not be known for its environmental sensitivity, but if the Greenland government feels cheated or embittered by the US government, it is likely to open the door for rivals while slamming the door on Americans. If alliances matter, it’s time to do right for Greenland, for they did right by the United States during the height of the Cold War and deserve American gratitude.