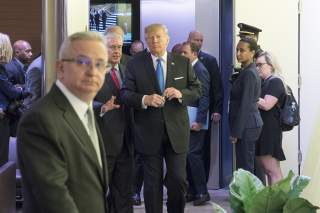 Speaking before the United Nations General Assembly, President Donald Trump reiterated that he will place the interests of the United States first in any international dealings. Trump said during his speech that he would follow a policy of “principled realism” to guide his strategy.

“The United States will forever be a great friend to the world, and especially to its allies,” Trump told the U.N. General Assembly on September 19.

“But we can no longer be taken advantage of, or enter into a one-sided deal where the United States gets nothing in return. As long as I hold this office, I will defend America’s interests above all else.”

Trump said that the United States pays more than its fair share to the United Nations.

“The United States is one out of 193 countries in the United Nations, and yet we pay 22 percent of the entire budget and more,” Trump said.

“In fact, we pay far more than anybody realizes. The United States bears an unfair cost burden, but, to be fair, if it could actually accomplish all of its stated goals, especially the goal of peace, this investment would easily be well worth it.”

In a break with previous U.S. presidential administrations, Trump called on other nations to take on more of the burden of maintaining the liberal world order.

“We believe that no nation should have to bear a disproportionate share of the burden, militarily or financially,” Trump said.

“Nations of the world must take a greater role in promoting secure and prosperous societies in their own regions.”

Trump attempted to define his concept of principle realism, however the details of the policy remain vague.

“We have a policy of principled realism, rooted in shared goals, interests, and values,” Trump said.

“That realism forces us to confront a question facing every leader and nation in this room. It is a question we cannot escape or avoid. We will slide down the path of complacency, numb to the challenges, threats, and even wars that we face.”

In part, Trump’s policy appears to be one of retrenchment—calling on other nations to take care of their own affairs.

“The United States of America has been among the greatest forces for good in the history of the world, and the greatest defenders of sovereignty, security, and prosperity for all,” Trump said.

“Now we are calling for a great reawakening of nations, for the revival of their spirits, their pride, their people, and their patriotism.”

The overarching theme of Trump’s speech can be summed up in this one paragraph.

“While America will pursue cooperation and commerce with other nations, we are renewing our commitment to the first duty of every government: the duty of our citizens,” Trump said.

“This bond is the source of America's strength and that of every responsible nation represented here today.”

The message as always is basically America First.