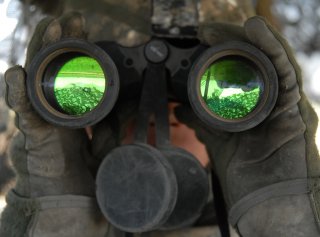 In a recent report, Amnesty International expressed its annoyance that “the US Army failed to keep tabs on more than $1 billion worth of arms and other military equipment in Iraq and Kuwait.” As the human rights group continues, “the [Defense] department’s Golden Sentry program,” carried about by the End-Use Monitoring Division of the Defense Security Cooperation Agency (DSCA), “is mandated to carry out post-delivery checks” to ensure that weapons do not wind up in miscreant hands. After an audit in September 2016, obtained recently by Amnesty through a Freedom Of Information Act request, the US Army acknowledged during that brutal militias had probably gotten hold of some of the guns it had given to the Iraqi Army. That’s not shocking given the chaotic nature of that civil war. According to the Defense Department’s Inspector General, the main shortcoming was that “the use of manually populated spreadsheets increased the risk for human error when inputting and updating equipment data.”

For my part, I don’t think that the Mahdists are just exploiting a mistake in cell C26.

End-use monitoring of American arms exports is a huge preoccupation for the Defense and State Departments. The Pentagon has an extensive network of “Security Assistance Representatives” in customer countries around the world, who serve both as agents for the purchasers and interlocutors with the US government, to ensure that the buyer understands the licensing and delivery process, and is apprised of any request’s status. They also periodically come round to check that those weapons are where they are supposed to be found. This global system of agents is part of a larger network of over 900 security assistance personnel in 102 countries intended to bolster the military capacity of friends and allies. Beyond that, the entire bureaucracy of the DSCA and the military departments’ own agencies number several thousand.

Even so, this legion is not always victorious, for there is a pile of regulations and statues governing their work. This is also problematic on the front end, before allies in extremis ever receive their kit. In 2013, a team from RAND wrote of how a loan of Mine Resistant Ambush Protected (MRAP) vehicles to an ally for service in Afghanistan required legal checks and financial provisioning through six different authorities for equipment, training, and sustainment. These included the Foreign Military Sales (FMS) system, the Coalition Readiness Support Program, the “Train and Equip” provisions of section 1206 of the National Defense Authorization Act (NDAA) of 2006, and the Acquisition and Cross-Servicing Agreements in section 1202 of the NDAA of 2007. However, as RAND wrote, when funding through one authority fails, “everything falls apart” like a “house of cards” whereby an “entire program may collapse.”

It is true that the Leahy Law (22 U.S. Code § 2378d) mandates that “no assistance shall be furnished… to any unit of the security forces of a foreign country if the Secretary of State has credible information that such unit has committed a gross violation of human rights.” Figuring out which militia is a happy militia is thus another task for the DSCA. In contrast to the United States, several arms-exporting countries in Europe have simpler approaches, with greater clarity in rule-making. They similarly take care to consider arms exports as tools of foreign policy, but they generally apply restrictions more starkly legislated, sometimes with outright parliamentary bans against alleged human rights violators. In Germany, the adage goes, “if it swims, it goes,” because warships are not very useful for crushing street demonstrations. The Netherlands has banned all sales to Saudi Arabia; Senator Paul and Congressman Amash would have the United States do the same. Sweden has simply banned sales to all countries without democratic governments.

Without commenting on the appropriateness of arms sales to any one country, let me focus on the appropriateness of arms sales to oppose one particular enemy. The thoroughly high-minded stance removes the Dutch, the Swedes, and others from the dirty work of ensuring that the merely unsavory can defeat the truly evil. There may be a shortage of Jeffersonian democrats in the Middle East, but the Da’esh gang are hostis humani generis. In that context, otherwise real concern about potential abuse interferes with the very real war effort. All this rather reminds me of that (possibly apocryphal) letter from Duke of Wellington to London in August 1812, in response to demands for an audit of material on hand:

Unfortunately the sum of one shilling and ninepence remains unaccounted for in one infantry battalion’s petty cash, and there has been a hideous confusion as the the number of jars of raspberry jam issued to one cavalry regiment during a sandstorm in western Spain. This reprehensible carelessness may be related to the pressure of circumstance, since we are war with France, a fact which may come as a bit of a surprise to you gentlemen in Whitehall.

We can ask the US Army to arm, advise, and assist its allies in the Iraqi Army, or we can ask the Army to consolidate its spreadsheets. For Iraqis, this fight is existential, and I’d rather they simply crushed ISIS. Wars may be audits themselves, but wars this hot may be no time for audits.

James Hasik is a senior fellow at the Brent Scowcroft Center on International Security (where this first appeared), where he recently drafted a study recommending improvements in the US arms export licensing system.