Duel of the Light Attack Planes: Tucano vs. Texan vs. Scorpion 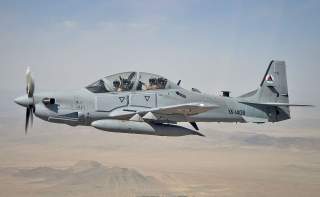 This July, the U.S. Air Force will be testing turboprop airplanes that look like they came out of World War II, for its OA-X Light Attack competition. Two of the aircraft—the Embraer/Sierra Nevada AT-29B Tucano and the Beechcraft AT-6 Wolverine—are old rivals for the flying branch’s favor. Other competitors include the Air Tractor AT-802, a crop duster upgraded with armor and weapons (no, really!), and a sleek-looking privately developed jet, the Textron AirLand Scorpion.

Whichever airplane receives higher marks in the trials, the real suspense lies in whether the Air Force will follow through on ordering some of the low-cost attack planes and forming squadrons to fly them. A new budget from the Senate Armed Services Committee sets aside more than $1.2 billion for two hundred new light attack planes by 2022, but the money still depends on an Air Force commitment, which may only come after the trials are complete.

For years, the U.S. Air Force has been dispatching high-performance fighter jets like F-16s and F-15Es that cost tens of thousands of dollars per flight hour to operate, in order to chuck costly smart bombs against scrubby insurgents with rusty AK-47s hiding in caves—or, at best, driving a pickup truck slinging an old Soviet machine gun on the back.

Not only is this grossly inefficient, but to add insult to injury, fast and high-flying fighter jets are poorly suited to the low and slow flying ideal for ferreting out insurgent fighters. Jet fighters burn through their fuel extremely quickly, while a good counterinsurgency plane needs to be able to fly for many hours while conducting Intelligence, Search and Reconnaissance (ISR) missions or loitering overhead to provide close air support for troops on the ground.

Furthermore, jet fighters can only take off and land from long and expensive-to-maintain runways—which more often than not means that they must be based hundreds of miles away from the front line, further worsening the endurance and fuel costs, as well as diminishing response and loiter time.

The Air Force does, begrudgingly, operate A-10 Thunderbolt attack jets—despite repeated attempts to defund the plane or sneakily ground them by depriving them of necessary upgrades. These are legendarily tough, very good for low and slow operations, and have a decent three to four hours of endurance. The A-10s cost $17,000 per hour to fly, which is cheaper than any other U.S. jet, but still considerable, and its heavy armor and armament is overkill in many situations. But what alternative is there?

Well . . . decades ago, the U.S. Air Force once flew counterinsurgency planes, such as the A-37 Dragonfly jet and the A-1 Skyraider and OV-10 Bronco propeller planes, that were ideal for long, heavily armed patrols over dense jungles and rocky mountains in Asia and the Americas. These were so good at their role that Special Operations Command even recently combat tested two retired OV-10s against ISIS in Iraq from forward airstrips to evaluate the usefulness of bringing similar aircraft back into service.

Consider, then, old-fashioned turboprop attack planes—or cheap, slower-flying jets—which could land on rough forward airfields close to the frontline, comfortably fly for five to ten hours at low speeds on ISR missions, and potentially cost as little as $500 a flight hour to operate (at least for the turboprops). A loitering light turboprop plane in particular might consume as much fuel in an hour as a jet fighter does in a few minutes.

Furthermore, there’s no reason contemporary turboprop aircraft can’t be outfitted with modern avionics, sensors and weapon systems, so as to deliver many of the same precision weapons an F-16 can at a fraction of the cost. Guided weapons not only have higher lethality and a lower chance of inflicting collateral damage on civilians, but they may also allow light attack planes to strike their targets from a safe distance when facing low-altitude threats, such as man-portable heat-seeking missiles or heavy machine guns.

Of course, you don’t send light attack planes to fight World War III against an opponent with fighter planes and radar-guided surface-to-air missiles. But that’s beside the point: the vast majority of U.S. Air Force combat operations in the last two decades have been against opponents that have very limited antiaircraft capabilities, as evidenced by minimal fixed-wing combat losses since 2003.

Furthermore, a light-attack-plane force would actually improve the condition of the fast jet force, by freeing them from spending thousands of expensive, airframe-wearing flight hours winging their high-tech gas-guzzling turbofan engines over the Middle East and Afghanistan, playing Whac-A-Mole with ISIS and the Taliban.

The two top contenders in the OA-X contest, the Super Tucano and AT-6, are old rivals from a competition to equip the new Afghan Air Force with its first attack planes. Despite the Super Tucano winning the contract, Beechcraft challenged the result in a campaign that emphasized the Brazilian origin of the Super Tucano, though in fact the A-29B would be assembled by the Sierra Nevada Corporation in Florida. The dispute dragged on for years, leading to a new competition that the Super Tucano won again, delaying the delivery of the A-29 until 2016.

Ironically, the rival aircraft are actually quite similar in appearance and performance: both tandem two-seaters powered by 1,600-horsepower PT-6 turboprops that boost both types to maximum speeds of around 360 miles per hour. Both planes also boast sophisticated avionics more commonly found on fourth-generation jet fighters, including data links for networking with friendly forces, ejection seats, chaff and flare dispensers to decoy hostile missiles, heads-up displays, radar-warning receivers, forward-looking infrared sensors, and the ability to launch precision-guided bombs and missiles.

Of course, there are distinguishing characteristics. The Super Tucano is the larger of the two aircraft, and it has dominated the light attack market for years. The Brazilian warplane has wider-spaced, higher-set landing gear with low-pressure tires that make it more suitable for operating from rough forward airstrips, and it has operationally proven its ability to operate in humid tropical environments. It can lug a heavier maximum bomb load of 3,400 pounds compared to the Wolverine’s 2,650 pounds, and the backseater may have better visibility due to its stepped cockpit.

The Super Tucano is also combat tested: Brazil has used them relatively successfully to police drug traffickers in the Amazon, while Colombian Air Force Super Tucanos launching precision attacks against hidden rebel encampments arguably played a major role in persuading the FARC to disarm in 2016. The Super Tucano is currently seeing heavy action in Afghanistan, and is being considered for service in the Nigerian and Philippine Air Forces.

The AT-6C Wolverine has yet to see orders, though it is developed from the T-6 Texan II trainer which is in widespread service with the U.S. Air Force, and thus would benefit from institutional familiarity and parts commonality if it were selected. It has a 20 percent better thrust-to-weight ratio compared to the Super Tucano—meaning it can accelerate and climb faster—and it boasts possibly up to 17 percent longer range thanks to its lighter weight and larger fuel tank. It also comes with additional high-tech trimmings, including a Scorpion helmet-mounted sight that could allow the pilot to target missile strikes with a flick of the head, and a mission computer adapted from the A-10.

The AT-6 has six weapons hardpoints compared to the Tucano’s five, though the comparison is not so simple, as the EMB-314 has two built-in .50-caliber machine guns, while the AT-6 would have to carry these on external pods. The AT-6’s pod-mounted machine guns can carry significantly more ammunition, but also induce drag and may be more difficult to aim. Meanwhile, the Tucano’s own infrared sensor may block the use of one hardpoint.

In addition to conventional bombs and rocket pods, both aircraft are capable of firing a wide range of precision weapons, such as the AGM-65 Maverick TV-guided missile, the AGM-114 Hellfire infrared-guided antitank missile, Paveway laser-guided bombs, Griffin missiles and even Sidewinder heat-seeking air-to-air missiles. In theory, the AT-6’s more advanced computers should be compatible with a slightly wider variety of weapon systems, though the Tucano has proven adaptable to new weapons and its infrared sensor is situated with a better field of view.

The fully upgraded Super Tucano is generally estimated to cost around $14 million per aircraft—with the infrared sensors and associated avionics accounting for a good third of the cost. Beechcraft claims its AT-6B would be cheaper, though its price is not believed to be far removed from the Super Tucano.

The awkward-looking Air Tractor AT-802U Surveillance and Light Attack Plane is in a decidedly lower weight class, though it supposedly can carry a heavier bombload of up to 4,500 pounds on its six hardpoints. The lighter plane can land on landing fields as short as 380 meters long and remain airborne for seven hours at a time. However, it lags behind with a maximum speed of around 245 miles per hour—unloaded!—and suffers from poor handling characteristics, which have led to accidents, leading to an unfavorable evaluation by the Naval Postgraduate School. Furthermore, it lacks most of the advanced avionics on the AT-29 and AT-6B, and is more limited in its ability to use precision ordnance, with the notable exception of laser-guided Hellfire missiles and GBU-58 Paveway bombs.