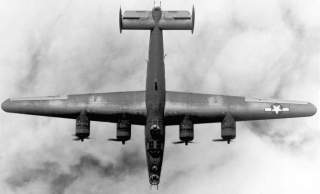 On the first of April, 1944, the United States committed an act of war against the nation of Switzerland.

Though it was April Fool’s Day, the citizens of the Swiss town of Schaffhausen found nothing funny about sixty tons of high explosive descending without warning on their heads. Nor were the U.S. and Swiss governments amused. With the United States embroiled in a global war that neutral Switzerland was desperately trying to stay out of, the stakes were too high for both nations.

The facts of the incident sound as depressingly mundane and familiar as any other accidental bombing. On that Saturday morning, 438 B-17 and B-24 bombers of the Eighth Air Force, escorted by 475 P-51 and P-47 fighters, took off from their bases in England. Their targets were German chemical plants in the city of Ludwigshafen in southwestern Germany. Among the heavily laden bombers lumbering aloft were twenty-three B-24 Liberators of the 392nd Bombardment Group.

The 392nd would be led by a Pathfinder bomber, equipped with air-to-ground radar designed by the British for Royal Air Force night bombing. Though the United States favored high-altitude precision bombing in daylight, western European skies were overcast so often that the Americans might as well have been bombing at night. So like the RAF, the Eighth Air Force often relied on Pathfinders to find the target and signal the other bombers when to release their loads.

But as the majestic formations of heavy bombers droned across France and into Germany, they ran into cloud cover as high as twenty-one thousand feet. That’s where the radar-equipped Pathfinder was supposed to save the day. Except that its radar malfunctioned, which meant the B-24s had to essentially guess whether they were bombing the right place, according to the recollection of a squadron commander cited in the 392nd’s website:

Without visual reference with the terrain, the lead navigator had to rely solely upon prebriefed estimates of winds aloft to carry out his dead-reckoning type of navigation. Of course, winds aloft can change by the hour as high and low air pressure patterns move, thus blowing the airplane formations from their briefed route. The navigator was helpless in knowing when and how much change was occurring.

Eventually the Pathfinder was able to glimpse the ground through a break in the clouds. The crew later guessed—based on the estimated distance and the forested terrain—that they were over Freiburg, about 150 miles south of Ludwigshafen. U.S. policy at the time was that if the primary target was obscured, it was better for the bombers to release their loads on another German city than lug the bombs home for a wasted trip.

And so the Liberators dropped 1,184 hundred-pound bombs. The problem was that the 392nd was actually 120 miles south of Ludwigshafen and, more important, fifty miles to the east of where they thought they were. Which took them into Switzerland and over the town of Schaffhausen.

Mindful that U.S. and British aircraft had accidentally bombed Switzerland several times previously, albeit without causing much damage, the Swiss had learned to heed air raid alerts. But “air raid warnings had been sounded many times in Schaffhausen with no follow up attacks, so people felt relatively safe,” according to a Swiss newspaper. “When the alarm went off on April 1, many did not take it seriously and failed to take cover.”

That complacency proved fatal. Large parts of Schaffhausen were devastated, forty civilians killed and 270 wounded. By the standards of what happened to German cities such as Hamburg and Dresden, the damage was minor. But to the neutral Swiss, it was shocking.

By the time the B-24 crews landed, exhausted after their eight-hour mission, news of the accident had spread. The 392nd’s commander “spent the rest of the night on the telephone,” recalls the group’s website. “Scrutinizing the navigator’s and bombardier’s logs confirmed the time that the community of Schaffhausen was bombed coincided with the time our bombs were released - and the target not positively identified.”

Now it was time for diplomatic damage control. The U.S. government apologized. America paid $4 million in damages, plus another $14.4 million after the war as compensation for all accidental bombings of Switzerland. As for the bomber crews, the only person disciplined was the lead navigator of the formation, who was never allowed to lead again.

For the sake of not upsetting the international apple cart, America and Switzerland didn’t press the matter too far. Nonetheless, many Swiss were convinced the bombing attacks were deliberate attempts to pressure them into cutting ties with Germany. That outrage struck many non-Swiss as sheer hypocrisy, given how closely Switzerland collaborated economically with Nazi Germany, as well as keeping the assets of Jewish Holocaust victims.

What is still notable about the Schaffhausen incident is how little things have changed. Just as today in Iraq and Syria, aircraft do strike the wrong target and kill innocent civilians. Not even smart bombs and GPS have solved that problem.

Image: B-24 photographed from above. Wikimedia Commons/U.S. Air Force