During World War II, the U.S. Navy Tried to Beat a Typhoon (and You Can Guess What Happened) 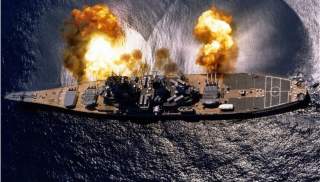 Approaching midnight on October 22, 1944 the U.S. Navy fought the last battleship engagement in recorded history in the Surigao Strait as part of the epic battle of Leyte Gulf. That encounter cost the U.S. Navy thirty-nine sailors and a single motor torpedo boat, in return for sinking two Japanese battleships, a heavy cruiser and three destroyers. But just two months later, the U.S. Third Fleet would be dealt a brutal beating, losing nearly eight hundred men and several ships in a matter of hours. Their enemy: mother nature, in the form of the merciless Typhoon Cobra.

However, some would also argue the fleet’s commanding officer played an equally fateful role.

Adm. William “Bull” Halsey was renowned for his aggressive, risk-taking leadership. Just prior to the Battle of the Surigao Strait, Halsey had ordered his Third Fleet and the capital ships of the Seventh to chase after two approaching Japanese fleets, leaving largely unprotected the landing ships that had just disembarked an invasion force at Leyte Gulf. He disregarded reports of the threat posed by a third Japanese fleet, and was slow to turn around when that powerful fleet under Adm. Takeo Kurita pounced on the Leyte beachhead. Only the costly self-sacrifice of Task Force 3, a small grouping of destroyers and escort carriers, persuaded Kurita to disengage from his attack, averting total disaster for U.S. forces.

In December 1944, Halsey would take what at first seemed a more reasonable risk. Carrier aircraft in Task Force 38 had been busy providing air support for the liberation of Mindoro in the Philippines when it came time to refuel on December 15. The massive fleet included thirteen aircraft carriers, eight battleships, fifteen cruisers and fifty destroyers—the last of which had limited fuel reserves. Halsey set a rendezvous point five hundred miles east of Luzon with twenty-four fleet oilers.

However, the powerful naval force encountered rough weather in transit. On December 16, the weather detachment in Hawaii told Halsey they expected the storm to turn north. Halsey’s own staff predicted—correctly, as it turned out—that it was heading west, towards the fleet. Halsey, wishing to swiftly conclude the refueling operation, decided to believe the first estimate and adjusted the rendezvous point accordingly.

But the difficult weather only worsened. When the destroyers—some of which were on their last 10 to 15 percent of their fuel reserves—attempted to refuel on the morning of December 17, the lines connecting them to the oilers repeatedly snapped in the swelling seas. By the afternoon, Halsey ordered his fleet to give up on the refueling operation, and set sail northwest. But the storm continued to follow close behind. That night the Combat Air Patrol sent aloft to protect the fleet found the violently pitching carrier decks impossible to land upon and were forced to ditch in the sea.

Believing Task Force 38 was clear of the storm, Halsey turned south that evening to try refueling again. He didn’t realize he had set a course directly into the path of Typhoon Cobra. Waves swelled up to sixty feet high, and even the fleet’s enormous aircraft carriers were soon keeling over to thirty- or forty-five-degree angles. Howling winds of over one hundred miles per hour ripped equipment, ammunition and aircraft loose and swept them into the water. The captains in Task Force 38 struggled valiantly to maintain their formation as Halsey insisted, but most were blown out of visual range, only able to track each other via radar.

The storm reached its lethal peak around 8:00 a.m. on December 18, causing devastation onboard the smaller aircraft carriers. Gale winds flipped a Hellcat fighter on the deck of the light carrier USS Cowpens, causing its fuel to ignite. Seven more lashed-down fighter planes were blown over into the ocean, bombs were sent tumbling across the deck like tumbleweed, and an antiaircraft gun was shorn from its mount.

Meanwhile, the USS Monterey was rolling at a seventy-degree angle in the cascading waves, when an airplane broke loose inside its hangar, causing a deadly internal fire. Serving on board the Monterey was Lt. Gerald Ford, then renowned as a college football star. The future U.S. president was dispatched below deck by the Monterey’s captain to find out if the fire was being brought under control—which it eventually was after the deaths of three seamen.

The worst off, however, were the fleet’s destroyers. Most were floating high on the water due to being low on fuel and having shed ballast water in anticipation of refueling. They had to husband what limited fuel reserves they had to avoid going dead in the water, which would have proved fatal under the circumstances. For smaller ships, it was vital to maneuver to accommodate the trough of the storm, but not all of the captains were experienced. Some futilely attempted to maintain their station despite the savage weather. The USS Dewey had one of its stacks torn off by the wind, causing a massive plume of steam to blast upwards from the stricken ship.

Only at 11:40 a.m. did Halsey give the order to “take most comfortable courses,” freeing the ships to do what they had to in order to remain afloat. By 1:45, he finally issued a typhoon warning.

But this came too late for the battle-scarred USS Monaghan, which had rammed and sunk a Japanese mini-submarine during the attack at Pearl Harbor. The older destroyer proved incapable of withstanding waves that left it leaning sixty degrees on its starboard side, until it flipped over entirely at 11:45. Only six of its crew survived.

The USS Spence, a modern Fletcher-class destroyer, followed soon afterwards. Seawater had flooded the ship’s electrical systems, causing them to short out and the water pumps to cease functioning. Its rudder jammed and listing over at seventy degrees, the destroyer folded over into water, taking all but twenty-four hands with it.

Last to go was the USS Hull, which was rolling at seventy degrees, caught in the trough between two waves. Seawater poured down the destroyer’s stacks, shorting out the engine, and flooded the destroyer’s Combat Information Center, causing electrical wiring to sizzle and spark. According to legend, the unpopular Lt. Cmdr. James Marks unwisely attempted to power his ship through the trough, when his crew counseled him to reduce speed instead. This led several officers to request that executive officer Greil Gerstley take command of the ship. Gerstley refused to mutiny, however, and was pulled into the ocean when the Hull finally capsized. However, Commander Marks’s harrowing sinking statement makes no mention of a near revolt.

More of the Hull’s crew made it off the ship than for any other vessel—but the survivors had to contend not only with the typhoon, which was strong enough to rip off the kapok life jackets, but shark attack as well. However, a surprising benefactor came to their rescue.

The destroyer escort USS Tabberrer was actually smaller than the Hull, and in nearly as bad condition, its radar antenna ripped away and its mast torn off. But under Capt. Henry Plage, it managed to avoid capsizing and its crew spotted the life rafts of the Hull’s crew. Over the following two days, it rescued fifty-five seamen from the water, disregarding orders to withdraw, and even fighting off marauding sharks with sharpshooters as it hauled shipwrecked seamen on board. Other ships in the fleet managed to pick up another thirty-eight.

Among those rescued were sixty-two men from the Hull, including Captain Marks. Afterwards, the tale of the near mutiny on the Hull inspired the book The Caine Mutiny by Herman Wouk, which was adapted into a famous movie.

The storm’s intensity finally began to slowly decrease in intensity after 2:00 p.m. that afternoon. Ultimately, the Third Fleet recorded 790 crew lost at sea, and 146 aircraft washed off carrier decks or damaged beyond repair. In addition to the three destroyers capsized, one light cruiser, five carriers and three destroyers were heavily damaged and in need of serious repairs. Adm. Chester Nimitz remarked those losses “represented a more crippling blow to the Third Fleet than it might be expected to suffer in anything less than a major action.”

Upon returning with his battered fleet, Halsey was subject to a court of inquiry onboard the destroyer tender USS Cascade. It ultimately ruled that the admiral had committed “errors of judgment committed under stress of war operations,” not negligence. Halsey might be excused for failing to divine the weather given the contradictory information at his disposal. However, he stubbornly refused to alter his plans as evidence mounted of the storm’s seriousness, and by waiting so long to give the order to break station, he inhibited the ships in his fleet from taking every action possible to avoid capsizing.

Halsey reassumed command of the Third Fleet in May 1945, and just one month later sailed it through another typhoon with winds of 140 miles per hour. Typhoon Connie claimed six lives and destroyed seventy-five aircraft, though no ships capsized this time. Nonetheless, the next court of inquiry was in a less forgiving mood and recommended Halsey be reassigned to a different command. Only the intervention of Admiral Nimitz kept Halsey as the leader of the carrier strike force until the end of the war with Japan several months later.