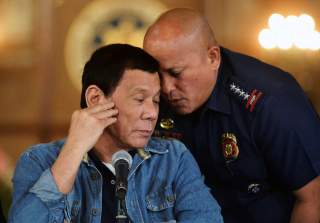 After winning a landslide victory in June 2016, Philippine President Rodrigo Duterte immediately fulfilled a campaign promise and instigated a so-called ‘war on drugs’. He publicly endorsed the arrest and killing of suspected drug users and sellers. He even went as far as to promise the police that there would be no repercussions for their actions.

International human rights organisations such as Human Rights Watch have documented that 3906 suspected drug users and dealers died at the hands of the police from 1 July 2016 to 26 September 2017. Unidentified gunmen have killed thousands more, which brings the total death toll to more than 12,000. This is an incredible increase from the six-month period before Duterte assumed power in which 68 people died at the hands of the police in drug-related incidents. There has been a wider ripple effect: hundreds of thousands of people have given themselves up to the police in the fear that they may be targeted next.

Fatou Bensouda, the chief prosecutor of the International Criminal Court (ICC), announced that there would be a preliminary examination on extrajudicial killings in the context of police anti-drug operations. This is an important step forward for the many victims, advocates and international supporters who argue that justice is not possible within the Philippines when the highest levels of government have promised to protect the police from repercussions. But there are three challenges to a successful investigation: the credibility of the ICC, procedural challenges, and expectations.

Duterte has previously called the ICC’s credibility into question, saying the organisation was ‘hypocritical’ and ‘useless’ and daring the ICC to take him to court. He has also threatened to withdraw his country’s membership of the organisation. Since news broke of the examination, Duterte has complained about the focus being on him instead of on other countries such as the United Kingdom, United States and places in the Middle East. Closer to home — where Duterte continues to enjoy high levels of popularity — some organisations argue that the ongoing Rohingya crisis in Myanmar is genocide and that the ICC should be involved. Duterte has also made this comparison himself.

There is a danger that the two distinct cases could be reduced to a simplistic binary of why the Philippines must be examined instead of Myanmar. There is a strong case for ICC involvement in Myanmar, but unlike in the Philippines, any progress on this front is difficult. Myanmar is not a party to the Rome Statute, so the Court has limited jurisdiction over any crimes committed. Additionally, while the United Nations Security Council can refer situations to the ICC, it is highly unlikely that China would allow this to happen in the case of Myanmar.

There are also several procedural challenges to overcome. Preliminary examinations can be notoriously slow, so quick proceedings after the examination are essential to ensure justice for any victims of international criminal law violations. This is made difficult in the Philippines, where the President himself is implicated in the possible crimes that have taken place. The Philippine National Police and the Philippine Drug Enforcement Agency have agreed to provide data to the ICC, but whether they will cooperate fully is questionable. Furthermore, given that Duterte has promised cover to those who have committed any wrongdoing, it is unclear how witnesses — often speaking at great risk to themselves — can be adequately protected.

Perhaps a greater tension is the issue of complementarity. In practice, the ICC will only hear cases where the state is unable or unwilling to do so. Duterte’s spokesperson Harry Roque has argued that domestic law provides a framework for investigations in the form of the 2009 Philippine Act on Crimes Against International Humanitarian Law, Genocide and Other Crimes Against Humanity.

There are relatively few drug-related cases pending in Philippine courts and no one has yet been held accountable for drug-related killings. The current administration has shown no serious willingness or ability to address the alleged crimes. Given that the aforementioned Law also states that a president enjoys constitutional immunity during their tenure, it is even more difficult to believe that domestic courts could thoroughly investigate all aspects of the case.

The final challenge is managing expectations. Preliminary examinations can take years to conclude — the ICC examination on alleged war crimes in Colombia began in 2004 and yet remains uncompleted. Furthermore, a preliminary examination is just that — preliminary. It only considers whether there is a reasonable basis for commencing an investigation into alleged crimes according to the criteria set out in the Rome Statute: jurisdiction, admissibility and interests of justice.

Champa Patel is the Head of Asia-Pacific Programme at Chatham House (The Royal Institute of International Affairs).