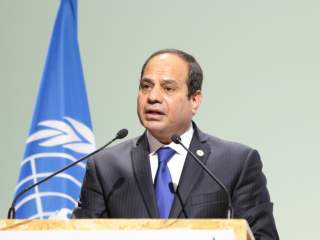 During a recent trip to London, a Middle East expert asked me how stable I thought the Sisi regime in Egypt to be.

Just one year ago, such a question would have been unimaginable. But 2015 was a tough year for Sisi. Despite the army's ongoing offensive, instability in the Sinai Peninsula is growing. And after showing tentative signs of stabilizing, the economy is likely to be another casualty of last October's Metrojet crash, with foreign direct investment and tourism suffering.

Public signs of rivalry and dissatisfaction within the regime have increased over the past year. These divisions do not pose a threat to regime stability, but regime stability does not necessarily ensure Sisi's longevity. Failure to degrade the insurgents in the Sinai or to revive and reform Egypt's economy could make Sisi vulnerable to disenchanted competitors, particularly from the military.

The conventional view of the army's support for the regime as “a constant, not a variable,” which held until the 2011 revolution, has often obscured our understanding of the power struggle between the major components of Egypt's authoritarian regime: the political elite, the military and the security services. Hazem Kandil's Soldiers, Spies and Statesmen does a commendable job in dispelling the myth of the Egyptian regime as a monolithic force.

The key regime relationship post-2011 has been that between the presidency and the army.

Well aware of this, then-Field Marshal Sisi made sure to place some of his closest allies in key military and intelligence posts before he resigned to run for president. They included Lt Gen Mahmoud Hegazy—whose son is married to Sisi's daughter—who was appointed as Chief of Staff of the Egyptian Armed Forces and Deputy Chairman of the SCAF, and Maj Gen Mohamed Al Tuhami—a mentor of Sisi—who took up the post of Director of General Intelligence. Another notable change in the ranks was the appointment of Maj Gen Ahmed Wasfi, a charismatic and outspoken officer and one of Sisi's most trusted field commanders (Second Field Army), as head of the Training Authority of the Armed Forces, effectively a demotion even though Wasfi retained his seat on the SCAF.

Since coming to power, Sisi has tried to further regain presidential control over the military establishment. There were rumors that Sisi tried to remove Col Gen Sobhy from his position as Minister of Defence and head of the SCAF and have him replaced by Hegazy. Sobhy was conspicuously absent from Sisi's visit to the Sinai after the July attacks.

Sobhy, who enjoys wide support within the army, considers the army an autonomous institution whose leaders should harbor no political ambitions. The delayed announcement of Sisi's candidacy in early 2014 was the result of divisions between Sisi and institutionalists such as Sobhy who felt that Sisi “in effect made the whole military, as an institution, complicit in his personal bid for power.”

The Sisi regime has overseen a high turnover in key military and intelligence positions, including the commanders of the Second and Third Field Army, the Navy, the Minister of Interior and the heads of General and Military Intelligence. While some of these are likely motivated by the operational and strategic demands of the military's ongoing offensive in the Sinai, they are further signs of tension in the highest ranks.

For example, the new commander of the Third Field Army, Maj Gen Mohammed Abdullah, and the head of the unified command structure that oversees all counter-terrorism operations in the Sinai, Lt Gen Osama Al Askar, are both close allies of Defence Minister Sobhy. Meanwhile, the Director of Military Intelligence, Salah Al Badry, who worked for Sisi when he was in charge of military intelligence, has been removed from this strategically important position.

The current situation is a constitutional and legal web of Sisi's own making. Article 201 and 234 of the 2014 constitution, negotiated by the military under Sisi's leadership in late 2013, and laws 18 and 20 brought down in 2014, stipulate that the Minister of Defence must be a ranking military officer, and during the first two presidential terms, needs the approval of the SCAF. This has effectively shielded the Egyptian Armed Forces' command structure from civilian (read: presidential) interference.

Sisi's external power struggles are looming as large as his internal ones. Relations with Egypt's Gulf allies, Saudi Arabia in particular, which has provided more than $20 billion in financial assistance over the past two years, are increasingly strained. Efforts by the new ruler, King Salman, to reconcile Sisi and the Muslim Brotherhood have been rebuffed by the Egyptians. The leaked audio recordings from the office of President's Sisi Chief of Staff, Brig Gen Abbas Kamel, will have no doubt hurt Sisi's stance in Riyadh.

If Sisi, often identified with the hardline faction within the regime, is challenged, both Saudi Arabia and the United States are likely to prefer a moderate regime alternative. So far, the relationship between Sisi and the SCAF and his external backers has remained intact. But while the regime may remain firmly in place for the foreseeable future, Sisi is not immune to its “sustainable instability.”

Casper Wuite is a former Research Associate at the Lowy Institute for International Policy. Between 2011 and 2014, he was based in Egypt as a political analyst for the European Union, the Carter Center, and the Dutch Ministry of Foreign Affairs. This article first appeared in the Interpreter.