Egypt on the Brink: President Sisi’s Big Task Ahead 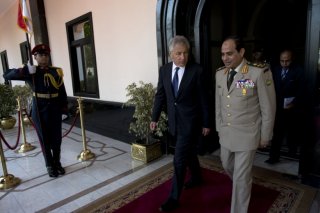 After wining 96% of the presidential vote, watching throngs of people waving flags of support in the front of the Supreme Constitutional Court, and welcoming an impressive delegation of leaders from the Gulf Arab states, it’s easy to see why Abdel Fattah el-Sisi is a happy man.

Once Egypt’s top general and the man responsible for orchestrating the ouster of former President Mohammed Morsi in July 2013, Sisi strutted up to the lectern this weekend to officially claim the title of Egypt’s President.  For millions of Egyptians who despise the Muslim Brotherhood movement or were simply turned off after a year of economic hardship, political dysfunction, and rising crime on the streets of Cairo, Sisi’s inauguration is a blessing: the beginning of what many hope is a new era in Egyptian politics, or at the very least the formation of a new government that will be able to tackle the litany of economic and security problems the country is currently facing.  One supporter of Sisi, speaking to Al-Arabiya before the former general delivered his first speech in his new role, captured this sentiment the best: Sisi, he said, “has given us fresh hope after a terrible past year.”

Whether or not Sisi will be able to maintain the populations’ steadfast support while making the tough decisions required to tackle the slew of crises confronting Egypt will only be known in the weeks and months ahead.  But what one can say for sure is that President Sisi will be unable to fix his country’s problems without the full cooperation and friendship of the international community.  As much as Sisi may hope that his allies in the Gulf will continue to pump billions of dollars in aid and oil subsidies into Egypt’s economy (Saudi Arabia, Kuwait, and the United Arab Emirates pledged a hefty $12 billion to Egypt after Morsi’s removal), it would be foolhardy to expect even the oil and gas-rich monarchies to hold to that commitment.

One of the critical issues that President Sisi will have to both manage and improve upon is Cairo’s relationship with the United States—a thirty-five year partnership that has provided Egypt with billions in military and economic assistance.  The strategic relationship has been turbulent since the overthrow of longtime Egyptian President Hosni Mubarak in February 2011, and while Washington’s extensive military-to-military ties with the Egyptian army has more or less continued (absent the cancellation of a few drills and the delay of a few helicopters), a growing number of U.S. lawmakers are now more willing to delay the type of defense assistance that was previously taken for granted over the past three decades.

The fact that tens of thousands of political Islamists have been arrested and thrown into prison (with over a thousand sentenced to death in two mass trials), an estimated 1,400 Muslim Brotherhood supporters and others have been killed by security forces, and political dissention has been severely restricted have all combined to give policymakers in Washington more of a reason to worry.  The Obama administration has been more willing than Congress to sign off on military deliveries to the Egyptians, but that dynamic could very well change if the Sisi administration does not relax the bans on protests and the regulations on free media that they introduced immediately after Morsi’s removal last summer.

Sisi may feel proud now, but he also has justification for feeling a sense of doom that Washington will cut up the yearly $1.3 billion in military aid that the Egyptians have relied upon to purchase top-notch equipment and enablers for its aircraft and tanks.  Unlike in previous years when the U.S. assistance package to Cairo was an annual tradition, the Secretary of State now has to certify to Congress “that a newly elected Government of Egypt is taking steps to govern democratically.”  Without that certification, nearly half of Washington’s annual $1.3 billion to Egypt will be held back.

If past precedent is any guide, lawmakers in Congress who consider the defense of human rights a core principle of U.S. foreign policy will not be shy in using their power to slow down the delivery of military equipment to Sisi’s administration if it fails to take the rule of law seriously.  General-turned-President Sisi may be smiling now, but his first year in power could prove to be the hardest of an otherwise impressive career.

Daniel R. DePetris is a Middle East analyst at Wikistrat, Inc., and an editor of the Atlantic Sentinel. Follow him on Twitter: @DanDePetris.