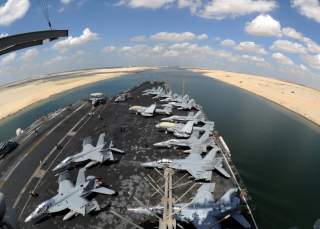 The Suez Canal has been a lifeline for global commerce and for military power-projection since its inauguration in 1869. For nearly a century, it was the Royal Navy’s vital link to most of the British Empire. Today, it remains a critical enabler of U.S. naval power, increasing the on-station time of American warships and their responsiveness to emerging crises.

Over the last several decades, U.S. Navy use of the canal has become a matter of routine, uninterrupted by occasional turmoil in Egypt and wider regional conflagrations. But increasing instability in the Sinai could threaten this routine, a possibility the Navy should recognize and prepare for.

Ships transiting from the East Coast to the Strait of Hormuz save over 3,000 nautical miles relative to voyaging around Africa, or about eight days in transit. In a round-trip 180-day deployment, a ship can save 16 transit days, increasing its on-station time while saving fuel. By transiting the Mediterranean, a ship can achieve presence near other key “hot spots” and provide the crew with morale-boosting visits to European ports.

Moreover, the Suez Canal facilitates the rapid movement of ships between the European and Central Commands. The ability to readily shift ships between the Mediterranean and Red Sea provides commanders with operational flexibility at a time of sprawling regional threats in Libya, Ukraine, Syria, Iraq, Yemen, and Iran. At present, a ship addressing a situation off Libya can reach the Strait of Hormuz in 4,000 nautical miles, enabling it to expeditiously respond to an emergent crisis. If that ship were unable to use the Suez Canal, it would have to transit nearly 12,000 nautical miles around the entire African landmass.

Unfortunately, the U.S. Navy’s continued use of this lifeline is increasingly menaced by growing disorder in the Sinai, on the eastern flank of the canal. Sinai-based militants linked to the Islamic State launched nearly 400 attacks against military and civilian targets in 2015, killing nearly 300 people, both dramatic increases over prior years. While over 3,000 of those militants were killed in turn, and nearly 4,000 arrested, the violence does not appear to be abating. In recent years, attacks on a busload of South Korean tourists, and an aircraft full of Russian ones, have indicated the militants’ anti-foreign intent.

Thus far, the militants have not demonstrated an ability to hold territory in Egypt (though they did briefly seize a city in northern Sinai in July 2015). However, they could menace ships transiting the canal, as they demonstrated in a 2013 rocket-propelled grenade attack against a commercial ship. Just as the USS Kearsarge and USS Ashland came under rocket attack while docked in the port of Aqaba in 2005, a warship unable to make evasive maneuvers could come under attack from a variety of shore-based projectile weapons. While warships are built to withstand attack, a series of limited-scale strikes could inflict personnel casualties or damage the ship while it was confined to a predictable route in a narrow body of water. Shooting back would be difficult, both because the attackers could be concealed by urban terrain and because rules of engagement could preclude firing at Egyptian territory. Likewise, in the confined waters of the canal, suicide boats could also be used for attacks like the one against the USS Cole in 2000. (U.S. Navy personnel fired warning shots against a boat in the canal in 2008 when they feared such an attack, killing an Egyptian.)

The canal is no stranger to violence, some of which has even led to its protracted closure in the past. It was subjected to a ground raid during World War I, as well as aerial mining and bombardment during World War II. Precisely 60 years ago, the canal was itself the focal point of a conflict. Egypt’s President Gamal Abdel Nasser nationalized it and, at the same time, blocked Israeli shipping via the Gulf of Aqaba in 1956. In response to these and growing threats from Egypt, Israel launched an invasion of the Sinai and Gaza Strip. British and French forces bombarded Egypt and landed forces on the canal, ostensibly to separate the two sides. (Given Nasser’s antipathy to British and French interests in the Middle East, the two nations would also have welcomed his overthrow as a by-product of their invasion.) Egypt lost militarily, but won diplomatically: British, French, and Israeli forces withdrew from the region under American and other international pressure. The canal was again the scene of major violence during the 1967 Arab-Israeli war, during which Israel again recaptured the Sinai. The canal served as the dividing line between Egyptian and Israeli forces during the war of attrition that followed, and was then subject to crossings by forces from both sides during the 1973 Arab-Israeli war. The canal remained closed from 1967 until 1975.

There is also the possibility that a future Egyptian government could close the canal to U.S. Navy traffic. While Egypt’s current government is pro-American, it only recently replaced a popularly elected government of the Muslim Brotherhood, which was less aligned with American aims. Some future government at odds with the United States—one that has forfeited America’s current billions of dollars of aid to Egypt each year—could selectively close the canal to American warships while keeping it open to commercial traffic. Nor is seizing the canal by force a realistic option: as the British and French found in 1956, it could result in a military victory but a diplomatic debacle. It would also likely engender a hard-to-extinguish insurgency along the canal’s banks.

From an operational standpoint, the worst-case scenario would be if the canal were suddenly and unexpectedly closed to U.S. warships (whether by terrorist threats or Egyptian policy) in the midst of a crisis. Ships that were poised to transit from the eastern Mediterranean to the northern Red Sea, or vice-versa, would be compelled instead to circumnavigate Africa. The result would be an even greater delay than if those ships had known from the outset that the canal would be closed to them, and could have avoided going deeply into a cul-de-sac.

For decades, the U.S. Navy has enjoyed the luxury of being able to transit the Suez Canal without hindrance. However, the risk of losing access to the Suez Canal—perhaps quickly and unexpectedly—should inform Navy strategic and operational planning. There are two ways this risk could be addressed. One is to reduce the probability of losing access by working with national and local authorities in Egypt to improve internal security in the canal’s vicinity. The other is to develop operational plans and even structure the fleet with the risk of losing Suez in mind: if forces cannot be rapidly re-tasked from one theater to another, or if on-station times are reduced, then changes in the employment of a mix of air and naval forces could be needed to achieve the same impact. Both approaches could enable the Navy to achieve effective power-projection under all conditions.