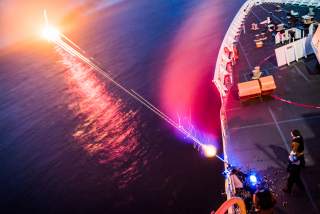 In the role-playing game of Dungeons and Dragons, players create characters based on a variety of skill levels and races.  They band together for adventures and campaigns seeking new weapons and magic or technologies that can help them in their quest.  The game’s maps may indicate impassable areas.  Some characters will fade away to make way for new players.  Some adventures will require close cooperation while non-player characters can offer advice or issue challenges.  The adventures are limited only by the imagination of the Dungeon Master and the players.  The same is true of solving the global problems of illegal and overfishing where enforced boundaries, identifying and networking new technologies, and public-private partnerships will be required.

Environmental organizations may advocate for sweeping changes such as banning commercial fishing for a period.  Such a radical effort would be met with political resistance based on the immediate economic impact to the legitimate fishing industry and the high demand for marine protein.  The most acceptable step to curtailing overfishing is identifying and stopping illegal poachers.  According to Daniel Schaeffer, a 27-year veteran of the U.S. Coast Guard currently the Senior Officer of the Ending Illegal Fishing Project with The Pew Charitable Trusts has argued that to defeat illegal fishing, “you have to disincentivize them and you have to change their behavior.”

If there is a bright light – or, rather, a constellation of lights – to addressing this issue, it is the level of activity among think tanks, non-governmental organizations, governmental agencies, and others to analyze and provide recommendations.  One example is Secure Oceans, a major report published in September by the Stimson Center’s Johan Bergenas and Ariella Knight.  Currently comprised of 46 governments and organizations, the State Department’s Safe Ocean Network was established in 2015 to share knowledge, technology, information, and data.   Its laudable goal is to end illegal, unreported, and unregulated (IUU) fishing by 2020.

Emerging technologies may well help achieve that goal.  More commercial fishing vessels are monitored by commercial surveillance satellites or business activities tracked by non-profit organizations.  “GPS is the key to determining what fish are caught, where and when,” according to Matt Merighi, Executive Director of Blue Water Metrics.  “This traceability is how the world can combat illegal fishing.”  But traceability isn’t only bout catching illegal vessels, it’s about rewarding legitimate fishermen.  “GPS readings could also be used by fishermen to prove to skeptics that they are playing by the rules.”   However, the same technologies that are enabling governments and NGOs to track illegal poachers can well be employed by the same illicit networks that are being chased.

Sanctuaries are presumably established to marine life.   However, marine sanctuaries – particularly those near smaller nations with few assets – can serve as illegal fishing grounds.  Without appropriate assets such as surveillance aircraft or patrol boats, enforcement is unlikely. In the Galapagos Island Marine Reserve, for example approximately 300,000 sharks are taken annually by poachers.   Even larger countries face this challenge.  Earlier this year, President Barack Obama built upon his predecessor George Bush’s established of a marine national monument off Hawaii encompassing more than half a million square miles.  In September, he established nearly 5,000 square miles off New England.   Nor is the U.S. alone in this effort.  For example, in 2014, the Pacific island nation of Kiribati created a large sanctuary off its own coast.

Creating such sanctuaries to minimize overfishing and enforcing those boundaries are often at odds due to the space and lack of resources.  Regardless of the size of the country, coast guard forces can be underfunded, undermanned, and under-resourced organization given their wide array of duties.  In 2015, for example, the U.S. Coast Guard conducted over 5,900 fisheries boardings and 69 boardings of foreign vessels to enforce IUU fishing.   The cost to catch and prosecute illegal poaches can be in the millions or far exceed the value of the vessel in question.  “Sanctuaries have become the place where illegal fishermen go to catch fish,” says Paul Watson, founder of Sea Shepherd Conservation Society.  “What’s the point of having sanctuaries without enforcement?   In the Galapagos Island Marine Reserve, about 300,000 sharks are taken annually.”

Watson is intimately familiar with Ecuador’s Galapagos National Park.  Sea Shepherd’s oldest partnership with a nation is with Ecuador.  In a capacity-building role normally reserved to nation-states, Sea Shepherd has provided Ecuador with an Automated Information System (AIS) to track vessels in the region as well as a ninety-five foot patrol boat and smaller boats.  It has also provide European-trained K-9s to monitor airports for illegally transported sea cucumbers, shark fins, and other sea food.  Ecuador relies upon the organization to build kennels, feed the dogs, and find homes when they are retired.  Sea Shepherd currently has other public-private partnerships with Mexico, Gabon, and Italy.  But the agreements with nations can also sour.  Watson recounts an agreement with Senegal that was successful with a cooperative minister.  “The Navy kicked out [Sea Shepherd] because we interfered with the navy’s money from the European trawlers,” he said in a recent interview.   In 2011, Sea Shepherd entered into an agreement with the island nation of Palau to prevent poaching in its waters.  A few weeks later, Palau reversed the agreement after pressure from Japan whose whalers in the Southern Ocean have been challenged by Sea Shepherd.

Nevertheless, some governments may be more amenable to working with NGOs or even private maritime security companies.  Nigeria, for example, has Memoranda of Understanding with companies to provide escort vessels in the high risk area of the Gulf of Guinea.  PMSCs provide the ships and the crew, but law enforcement authority rests with Nigerian personnel aboard.  NGOs can bring funding, press and infrastructure that otherwise might not be available or might not require a quid pro quo from MOUs with other countries.  “Non-governmental organizations have different goals, budgets and methods of operation,” says Schaeffer.  “Public-private partnerships are key to sustained and effective efforts to address IUU fishing.”

There are no easy answers to solving illegal fishing, but like Dungeons & Dragons, more and diverse players are joining the game, bringing their skills and innovative approaches.  If the goal to end IUU fishing by 2020 is not met, it will at least be well ahead of where it stands today.

Part I: There Aren’t Always Enough Fish in the Sea

Claude Berube has taught in the Political Science and History Departments at the Naval Academy.  He has co-authored three non-fiction books and writes the Connor Stark novels (Naval Institute Press.)  The views expressed are his own and not those of the Naval Academy or Navy.