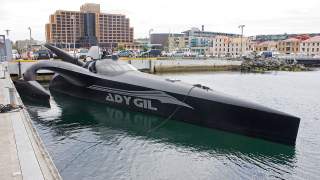 The simplicity of the game rules for Battleship allows even young individuals to play.  Once each side’s ships are set up on the hidden grids, it becomes a guessing game until the targets are acquired and the player keeps hitting each target until the enemy’s ships are sunk.  Wherever it operates globally, Sea Shepherd plays battleship in search of illegal trawlers such as the THUNDER in which the BOB BARKER chased its prey for 110 days and 10,000 nautical miles until the former was scuttled off West Africa.  In December, Sea Shepherd gets underway for its eleventh campaign to the Southern Ocean to intercept the Japanese whaling fleet.  The organization’s mantra is “direct action.” Sea Shepherd’s fleet is the backbone for how the organization carries out its mission.

The home office of Sea Shepherd founder Paul Watson is filled with awards for his work, an extensive array of books, and models and prints of past and present Sea Shepherd vessels.  Toward the end of a recent interview, he turned to the historical model with which he identifies.  It is of the Confederate commerce raider SHENANDOAH which attacked the Union’s whaling fleet in the Pacific (a strategy previously used by Captain David Porter’s USS ESSEX during the War of 1812 against British whalers.)   “The [American] Civil War saved three species of whales.  “Under the command of James Waddell, the SHENANDOAH never killed anyone,” said Watson who considers the captains of the SHENANDOAH and ALABAMA as role models.  Watson also recounted the story of the SHENANDOAH’s first officer, Dabney Scales: “Upon boarding a Yankee whaler, the captain asked Scales, ‘Why are you preying upon a defenseless merchantman?’ to which Scales replied ‘because we’ve entered into a treaty both defensive with the whales to vanquish their mortal enemies.’ Now he said it as a joke…but all the places I’ve fought for whales they fought in the same regions.”

Sea Shepherd now comprises the largest and most diverse fleet it’s had since 1979.  On at least one occasion, the organization quietly purchased one of its ships through a series of channels.  Japan may be Sea Shepherd’s greatest adversary given their competing interests in whales in the Southern Ocean.  It was for that reason that the organization purchased a vessel of the Japan Meteorological Agency through a shell company and a South Korean broker under the auspices that the ship would be converted to a yacht.  Sea Shepherd was even able to get Japan to deliver the ship to Australia.  “We set up a company to Hong Kong and had a broker in South Korea.  The name of the ship would be the New Atlantis.  We did so because of the Germany commerce raider the ATLANTIS that was sent to destroy a whaling fleet during World War II.”  (It is true that the ATLANTIS was a German auxiliary cruiser but it was its sister ship, the PINGUIN that was sent to destroy the British whaling fleet in the Antarctic.)

The fleet has evolved since 1979.  Most of the vessels have been used by nations for fisheries enforcement or research but the organization has evolved with ships such as high-speed, stabilized mono-hull MV BRIGITTE BARDOT and more recently with its first ship built from the keel up, the MV OCEAN WARRIOR.    What makes Sea Shepherd unique is its operations globally using its fleet.  All told, the organization’s fleet has a gross tonnage of more than 3,000 tons.  While a third of many U.S. and other national surface combatants, the gross tonnage exceeds many smaller nations’ navies such as Ghana, Cote d’Ivoire, and Nigeria.

Sea Shepherd adapts due to changing conditions.  For example, the ships used to be painted black for evoking the European ships that opened trade with Japan.  “It represents change,” Watson said.  “We were sending a message.”  In 2011, the color scheme was change in part out of practicality to reflect heat and not absorb it.  Several of the ships now bear the dazzle camouflage scheme because it looked better.  Watson also had large white numerals “77” on the bow of the STEVE IRWIN and had wooden false guns mounted topside when it transited the Gulf of Aden when Somali pirates when they still threatened shipping.  Pirates did approach the ship but diverted when they saw what they thought were real guns.  On another occasion, a coalition helicopter approached the ship and hailed it thinking it was a Dutch naval vessel.   Painting ships is not unusual for non-state actors or non-governmental organizations.  In 2008, the private security firm Blackwater repainted its ship black with large white letters spelling “SECURITY” along the hull so that Somali pirates would get a sense of its mission.

For many years, the organization used ship-based helicopters for aerial surveillance but those have been largely supplanted by unmanned platforms because they are less expensive to purchase and maintain and more efficient.  Sea Shepherd began using drones in its campaigns several years ago. One of the first-generation drones failed a test at sea but as drone technology has advanced and improved and with it the organization’s use of the platform.  “We jumped [on the use of drones] right away.  It’s efficient.  Now they have night vision, FLIR” Watson notes.

Sea Shepherd is also exploring improvements internal to the ships for the crew such as food.  All the ships are vegan which has certain advantages.  It is not required to report agriculture such as meat which may be subject to quarantine in various ports.  Instead it relies on staples such as rice, grains and tempeh which can last far longer.  Last year the SAM SIMON installed a hydroponic garden to provide some fresh vegetables when the initial supply was depleted.  The ship has the advantage that it had an unused lab aboard, space which is harder to come by on the rest of the fleet.  But such experiments might prove useful even to navy or coast guard ships.  The Combat Feeding Directorate at the Natick Soldier Research, Development and Engineering Center is testing the feasibility of hydroponic gardens on U.S. navy vessels.

The fleet has adjusted its force structure in accordance with its missions and its needs similar to private maritime security companies (PMSCs.)  During the height of the Somali piracy threats, several firms purchased older ships to provide convoy escorts.  That model has shifted to another high-risk area – the Gulf of Guinea – where the government of Nigeria has partnered with several PMSCs to provide escort vessels for threatened tankers.  Some fifty escort vessels representing a variety of companies are in the Gulf of Guinea but most are older patrol ships and at any time only a dozen or so are deployable.  Consequently, a consortium of the PMSCs provides ships to each other when needed.  Companies like Diaplous Maritime Services Nigeria have begun providing improved ships built from the keel-up.  According to Dimitris Maniatis of Diaplous Maritime Security Cyprus, four upgraded Fast Crew Supplier 3307 security ships were sent to the region where company personnel will crew the ship but any law enforcement aboard will be provided by the Nigerian government.  This public-private partnership concept where firms provide the ships and crew while smaller, less-resourced nations provide in situ law enforcement is not new.  It should not be a surprise, therefore, that Sea Shepherd has used a similar model in the Galapagos or that it has built a vessel at the same shipyard which builds the FCS 3307.

Sea Shepherd Netherlands has received approximately one million Euros annually from the Dutch Postcode Lottery.  Last year, however, it won more than eight million Euros in a competition with other organizations, this time to build their dream ship.  The result was MV OCEAN WARRIOR, a Damen Shipyard-built upgraded steel-hulled FCS 5009 ship that launched earlier this year.  Capable of thirty knots, OCEAN WARRIOR is currently in Australia awaiting Operation NEMESIS – Sea Shepherd’s latest campaign to challenge whalers in the Southern Ocean.  Unlike previous campaigns in which an increasing number of ships got underway, only OCEAN WARRIOR and STEVE IRWIN (which will serve as the supply ship) will conduct the campaign.  “OCEAN WARRIOR has more powerful engines,” said Watson, “room for a crew of fourteen and a huge water cannon.”  The ship’s mission will be to block the slipway of the whale factory ship NISSHIN MARU.

Overfishing and illegal fishing represent the rare alignment of political interests. For liberals, the preservation of marine life is paramount.   For conservatives, plentiful fish stock means less expensive seafood for consumers, sufficient future resources for business growth, opportunities for innovation, and the enforcement of laws against widespread illegal poachers.  For libertarians, organizations like Sea Shepherd are a grass-roots, private sector alternative to government whose innovation comes from a lack of bureaucracy and individual initiative to solve a problem.

What this all means is that organizations have identified a need that countries are unable or unwilling to fulfill whether if it is maritime security or challenging illegal fishing.  In part, it represents capacity-building and public-private partnerships that can address some of the ocean’s challenges and why states must include NGOs and PMSCs in their consideration of solving certain issues like this.