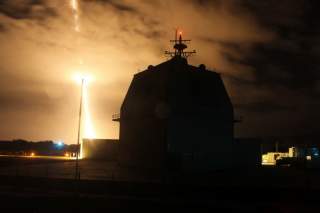 Today marks the first significant setback for Russian President Vladimir Putin’s assault on Europe. For more than two years, Russia has been on the march in Europe and elsewhere, undermining the political and economic systems of neighboring countries, intimidating their legitimate governments, seizing their territory and alarming America’s allies and friends.  This is a pattern we have seen over and over again from Central Asia and the Caucasus to Eastern Europe and most recently the Middle East. The Kremlin spent years preparing to seize the Crimea and Eastern Ukraine, bribing local officials, penetrating that country’s services, and engaging in cyber espionage.

There was also a campaign of intimidation directed against Ukraine’s friends and potential allies in the West. The central feature of this campaign was the threat to use military force up to and including nuclear weapons if the EU and NATO did not accommodate Russian interests and even pressure the government in Kiev to accede to Russian demands. French President Hollande and German Prime Minister Merkel have done better than former British Prime Minister Chamberlain in selling the Central Europeans out.

Backing up Moscow’s threats is a modernized Russian military. Although significantly smaller than its Soviet era predecessor, the new Russian military is better organized, equipped and capable, as demonstrated in a host of exercises, of rapidly putting a combined arms force of over 100,000 in the field. Russia has significantly expanded its integrated air defense system to the point that now the Baltics, much of Poland, even parts of Germany and half the Black Sea would be denied access to NATO aircraft in the event of war. Russian aircraft routinely buzz NATO ships and planes in international waters in an attempt to force the West to accept that these areas are Russian controlled.

The key to the Russian campaign of intimidation and coercion is their nuclear arsenal. Russia is modernizing every part of its nuclear force posture. Just the other day it announced the deployment of a massive new intercontinental ballistic missile (ICBM), a replacement for the aging SS-18. The RS-28 Sarmat is supposed to carry no more than ten warheads but has the power to throw many more halfway around the world. Russia is modernizing the rest of its ICBM force, deploying an advanced submarine that will carry a new ballistic missile and adding dual capable cruise and ballistic missiles to its theater land and sea forces. It is clear that Russia has violated the 1987 Intermediate-Range Nuclear Forces Treaty by developing cruise and ballistic missiles that exceed permissible ranges.

The West’s response to Russian aggression has been, to say the least, halfhearted. The U.S. is deploying a few thousand troops and a couple of hundred combat vehicles back to Europe. Germany is increasing the size of its military next year by 14,000. Defense spending among the NATO countries, with the notable exception of Poland, Greece, Estonia and the United Kingdom, is pitiful.

Given these negative trends, it is important to acknowledge when the West does stand up to Moscow. Today, the United States turned on its first operational ballistic missile defense site in Romania. Washington went ahead with this deployment, part of what is called the European Phased Adaptive Approach, despite persistent complaints by Moscow and even strident threats that it might respond by employing tactical nuclear weapons against any European missile defense capabilities. The Romanian site is the first of two planned deployments of the Aegis Ashore system which relies on the proven SPY-1 radar and advanced versions of the Standard Missile 3. While this system cannot interfere with the launch of Russian intercontinental or submarine-launched ballistic missiles, it can defend Europe against ballistic missiles coming out of the Middle East. This deployment on land complements the earlier stationing in a Spanish port of four Aegis destroyers with the Ballistic Missile Defense System and Standard Missile 3s.

Even though President Obama cancelled his predecessor’s plan for the deployment of a more capable missile defense system in Central Europe and even eliminated from his own plans the development of a Standard Missile variant capable of intercepting ICBMs, the Russians have been relentless in their criticism of the U.S. and European plans to deploy missile defenses. U.S. diplomats have talked themselves hoarse attempting to convince Russian officials that the planned sites pose no threat to the Russian strategic deterrent. But to no avail. The reason for this is that the Kremlin needs Europe to be defenseless in order to implement its strategy of political intimidation and nuclear coercion.

It is a good thing when Washington refuses to be intimidated by the thugs in the Kremlin. It is even better when the issue on which the U.S. government has chosen to take a stand is the deployment of missile defenses in Europe. Now if the administration could just get some of our allies to actually invest in their own missile defense capabilities, the message to Moscow would be clear.