Everything You Need to Know about Argentina's Submarine Force 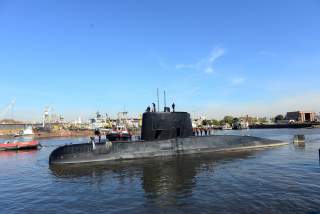 The submarine ARA San Juan has been missing since last week. An international flotilla, including ships and planes from Argentina, the United States, the UK, Chile, Brazil and Uruguay continue to search for the lost boat, with time growing critical. Here is an overview of the role that ARA San Juan played for the Argentine Navy.

History of the Argentine Navy

The Argentine Navy, like the other navies of the Southern Cone, has long tried to maintain a degree of technological competitiveness with the modern fleets of Europe. In the early twentieth century, along with Chile and Brazil, Argentina acquired modern dreadnought battleships. These dreadnoughts eventually fell into disrepair and became obsolete, and were replaced by cruisers and aircraft carriers purchased from the United States and the United Kingdom.

When war came, the Argentine Navy was able to seize the Malvinas, but could not defend them from the British naval task force that deployed to retake them. Although the Navy initially contested the British exclusion zone, it largely withdrew to its ports after the nuclear submarine HMS Conqueror torpedoed and sank the ARA General Belgrano. From that point on, the Argentine Air Force carried most of the burden of the unsuccessful conflict.

During the Falklands War, the Argentine Navy operated two submarines, the venerable ARA Santa Fe (forced to beach before being captured by British forces) and the ARA San Luis, a German-built Type 209 boat. Although ARA San Luis failed to sink any British ships, she did manage to give the British task force fits, with several distracting but unsuccessful attacks undone by faulty torpedoes. But the destruction of ARA General Belgrano by HMS Colossus hammered home the need for additional modern submarines to prosecute Argentina’s claim to the Malvinas.

Argentina had planned to acquire a flotilla of modern submarines from Germany, the world’s most accomplished builder of diesel-electric submarines, in the late 1970s, but these plans only claim to fruition in 1982. Argentina ordered six TR-1700 submarines, two to be constructed in German yards, and four in Argentina with German assistance. The Navy reasoned that larger, longer-legged boats could operate even more effectively than ARA San Luis, and could provide a real operational deterrent if war recurred over the Malvinas.

ARA San Juan and her sister, ARA Santa Cruz entered service in 1985 and 1984, respectively. Displacing 2200 tons, they are roughly the same size as the Israeli Dolphin-2 class, and can make twenty-five knots submerged. With a crew complement of forty-four, the boats have an endurance of about thirty days. They have six torpedo tubes, and can carry up to twenty-two torpedoes.

Argentina had expected to build four more subs to the TR-1700 type, but a lack of funds led to the suspension of construction of three of the boats at an early stage, and one (the new ARA Santa Fe) at a relatively advanced stage. The incomplete hulks of the three least advanced boats were cannibalized for spare parts in order to keep ARA San Juan and ARA Santa Cruz in operating condition.

ARA San Juan underwent modernization between 2007 and 2013 in an effort to extend her service life and update her combat systems. This period of modernization corresponded both to the 2009 global financial crisis, and to the 2012 Argentine debt crisis. As soon as the boat is found, much attention will focus on the work completed during this period, and whether short-cuts were taken that may have led to the loss of the ARA San Juan.

We have little good information yet on what happened to the ARA San Juan. The captain reported a minor electrical problem before losing contact with shore, but this was not regarded as critically endangering the boat. The ability of the crew to survive a sinking depends a great deal on the nature of the failure, and on how long ago the boat refreshed its air and recharged its batteries. At this point we just don’t know, but it is obviously positive news that so many countries have decided to contribute to the search.

As soon as the ARA San Juan is found, hopefully with the crew safe, serious efforts will begin to determine the cause of the incident and remedy any systematic problems with similar boats. Germany is a major exporter of submarines, having enjoyed huge success with its Type 209 and Type 214 boats. These boats have a reputation for reliability, having operated for many years with many different navies. The ARA San Juan is the first German-built submarine of the post-war era to experience a catastrophic mishap.

There is no question that it is difficult and dangerous to operate a submarine arm without sufficient investment in training and maintenance. The Argentine Navy has historically been active, but repeated financial and economic crises may have had a serious impact on readiness. The margin of safety for a submarine is less than that for a surface ship, which is perhaps why so many submarines around the world spend so much time tied up alongside a pier.

Robert Farley, a frequent contributor to TNI, is author of The Battleship Book. He serves as a Senior Lecturer at the Patterson School of Diplomacy and International Commerce at the University of Kentucky. His work includes military doctrine, national security, and maritime affairs. He blogs at Lawyers, Guns and Money, Information Dissemination and The Diplomat.