Everything You Need to Know: Japan's Missile Defenses 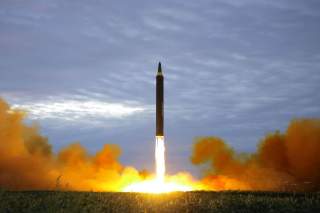 The August 29 overflight of Japan by a North Korean missile highlighted Tokyo’s number one post–Cold War security dilemma: how to defend against ballistic missiles. Two of Japan’s neighbors and potential adversaries, China and North Korea, field large numbers of conventional and nuclear-tipped ballistic missiles, and would likely use them liberally in a conflict. As a result, Japan has fielded the most sophisticated ballistic missile defense system outside of the United States.

Japan first became aware of the ballistic missile defense problem in the 1990s, when China began investing heavily in short (DF-15) and medium range (DF-21) ballistic missiles that could strike both Taiwan and Japan. While Tokyo and Beijing enjoyed relatively good relations, a turn for the worse in Sino-Japanese relations could see missiles pointed at Japan.

At the same time, North Korea was pursuing a missile program that would fulfill Kim Il-sung’s dream of attacking U.S. bases in Japan, bases that would be invaluable in a second Korean war. These worries were validated in 1998, when a North Korean Taepodong-1 intermediate range ballistic missile overflew Japanese territory before landing in the western Pacific Ocean.

In the late 1990s, Japan embarked on an tiered ballistic missile defense (BMD) system to protect the country from missile strikes. Umbrella coverage of the Home Islands would take the form of ship-based SM-3 interceptors designed to kill incoming enemy warheads in space, the so-called “midcourse” phase, before they begin to descend upon their targets.

The second, lower tier would involve point defense of specific potential targets, including military bases and Japanese cities, would take the form of Patriot PAC-3 air defense missile systems that would intercept warheads in the terminal phase. If an incoming warhead managed to penetrate the destroyer screen and headed towards a target protected by Patriot missile batteries, Japan’s BMD network would have a second shot at making a kill.

Japan began building the umbrella with the Kongo-class guided missile destroyers. Japan built four destroyers, Kongo, Kirishima, Myoko and Chokai, which in capability are virtually identical to early models of the U.S. Navy’s Arleigh Burke-class destroyers (Flight II). More importantly, Japan built the destroyers with version 3.6 of the Aegis Combat System, which was designed to intercept ballistic missiles. This required adding the SPY-1D radar and Mk. 41 vertical launch system silos that could house the SM-3 missile interceptor, but turned the four destroyers into potent missile killers.

The original deployment plan was to have four guided missile destroyers with SM-3 Block 1B interceptors in service. This would allow two destroyers to be at sea at any one time. The 380 mile range of the Block 1B meant that, properly spaced, two destroyers could cover almost the entire country—with the exception of Okinawa and the Ryukyu islands. A third destroyer would ensure complete coverage. In the meantime, Japan would fund development of the SM-3 Block IIA, which would have a maximum range in excess of 1,300 miles—allowing even fewer destroyers to provide even more comprehensive coverage.

Meanwhile, Japan has steadily built up its arsenal of Patriot surface-to-air missiles. Tokyo purchased the first batch of Patriot PAC-3 missiles in the early 2000s. PAC-3 differs from earlier versions of the Patriot missile, PAC-1 and PAC-2, in being optimized for targeting high-speed incoming missile warheads. PAC-3 is practically a new missile, and a smaller, more compact one at that—a single Patriot missile launcher can carry sixteen of the newer PAC-3 missiles instead of just four of the older PAC-1 or PAC-2. One major downside is that PAC-3 has a range of just twelve miles, making it capable of protecting only specific targets.

As of 2013, Patriot PAC-3 was deployed in thirteen locations across the country, concentrated in the Kanto and Kansai regions, and the southern island of Kyushu. PAC-3 famously defends Japan’s Ministry of Defense building in Shinjuku, Tokyo, although the missile battery actually protects the greater Tokyo metropolitan area. PAC-3 also protects facilities such as Misawa Air Base in northern Japan and potential targets on the island of Okinawa. This month, further deployments across southern Honshu were reported by the Associated Press, including Hiroshima, Kochi, Shimane and Ehime. While these deployments cover the majority of the population the problem is that virtually all of Japan is a target and it is impossible to provide a two-tiered defense to everything.

Japan’s BMD defenses rely on a nationwide network of ground-based radars. From Hokkaido in the north to Okinawa in the south, seven older, upgraded FPS-3UG radars and four FPS-5 radars maintain continuous watch westward. In the event of a missile launch, the ground-based radars can detect, identify, and provide tracking data to both destroyers at sea and PAC-3 batteries on land. Additional radar data is provided by destroyers at sea with their SPY-1D radars operating.

Japan is constantly evolving its BMD capabilities. Japan’s initial force of four destroyers equipped with Aegis 3.6 has, with the retrofitting of the two Atago-class destroyers, become a force of six destroyers with Aegis version 5.0. These destroyers will receive the latest SM-3 interceptor, Block IIA, as it exits testing. Two more destroyers are currently building out, eventually bringing Japan’s BMD fleet up to eight ships.

Finally, Japan is set to purchase an advanced version of PAC-3, PAC-3 MSE, in time for the 2020 Tokyo Olympics. PAC-3 MSE incorporates an extended range booster, increasing the missile’s effective range to nineteen miles. There is also talk of Japan purchasing the Terminal High Altitude Area Defense system, or THAAD, as well as the AN/TPY-2 radar. THAAD would function in-between SM-3 and PAC-3, protecting a larger area from incoming warheads, but PAC-3 would still be the last-ditch defense.

Missile defense for any country is a moving target, as potential adversaries continue to engineer better, more effective missiles. Japan’s defenses for now are likely adequate for the task. The deployment of Chinese or North Korean multiple independently targetable reentry vehicles (MIRVs) however would be problematic. MIRVs, which increase the number of warheads per missile from one to six or more, could overwhelm Tokyo’s missile defenses in wartime. MIRV technology may force Japan to develop the capability to destroy enemy missiles on the ground before they launch. If that’s the case, Japan may enjoy the unique position of developing defensive missiles before it develops offensive ones.