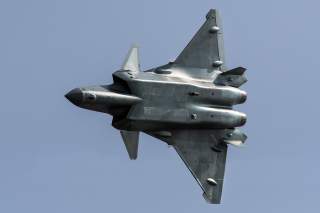 China identified more than a decade ago that transforming its air force’s capability in the area of air-to-air missiles was an important part of its military modernization. Efforts since then appear to have paid off, with experts forming a consensus that China’s air power is already capable of challenging that of the US in certain scenarios, in part thanks to indigenious missiles.

Chief airpower specialist at the International Institute for Strategic Studies, Douglas Barrie, noted recently that some of the new weapons being introduced on Chinese aircraft are equal to Western equivalents. In the case of one missile, it has surpassed any other country’s capabilities.

The new weapons, including a long-range air-to-air missile, Barrie wrote earlier this year, have completely transformed the balance of power in the skies.

“For the notional Western combat aircraft pilot, there is no obvious respite to be found in attempting to avoid within visual range threat of the PL-10 by keeping to beyond visual range. In this environment also the PLAAF will be able to mount an increasingly credible challenge, and at engagement ranges against some targets that would previously have been considered safe. As one former U.S. Air Force tanker pilot drily noted to this author when discussing China’s yet-to-be-named, and yet-to-enter service, very long-range AAM, ‘That’s aimed right at me.’”

China’s advancements made in air power, which have been made alongside those of Russia, have not just caught the attention of the US, as Bloomberg reported this week.

“This shift isn’t just important for the US. India has watched with trepidation as Russia supplies Beijing – and Beijing supplies Pakistan – with more sophisticated weaponry…

According to Rajeswari Pillai Rajagopalan, Russia’s potential approval for China to resell its jet engines to Pakistan was the most frequent topic of discussion at weekly meetings of the National Security Council when she was assistant secretary to the NSC Secretariat from 2003-2007. If Pakistan’s jets were equipped with the new radar and China’s PL-10 missiles, now available for export, India’s aging Russian MiGs would struggle to compete, she said.”

Some missiles China developed with Russia’s help may now be even better than original Russian versions, but Moscow is not particularly worried, according to some.

“They are certainly a growing power,” Vasily Kashin, a Moscow-based military aviation specialist was quoted as saying in the Bloomberg report. “But they are not omnipotent, and they are Russia’s partner.”

That is in line with recent analysis pushing back on skepticism of a Russia-China military alliance.

“As long as Russia sees the US as its chief rival and is focused primarily on Eastern Europe and the Middle East, and China looks towards the Asia-Pacific, it is quite likely that Beijing and Moscow will be able to manage their contradictions and maintain a fairly robust military partnership,” Yevgen Sautin wrote for the Party Watch Initiative, which publishes research drawing from Chinese-language publications. “Even without an explicit alliance, this makes both states more formidable competitors.”