Explained: The Real Point of the State of the Union 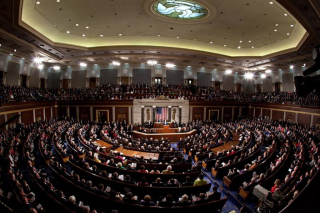 America’s constitution is more than just seven articles and twenty-seven amendments. Although they are often overlooked, a number of unwritten conventions also form part of the de facto U.S. constitution. The rule that the Supreme Court gets the final say over interpreting all aspects of the constitution, for example, is nowhere to be found in the written constitution itself—and, indeed, was vigorously disputed by past presidents such as Andrew Jackson—but is now held to be sacrosanct, part of a deeply entrenched unwritten constitution that oils the machinery and eases the working of the written components.

The State of the Union address has become part of that unwritten constitution. Formally, Article II is vague about how presidents should keep Congress informed (“He shall from time to time give to the Congress Information of the State of the Union, and recommend to their Consideration such Measures as he shall judge necessary and expedient”). From Jefferson through to Taft, in fact, each successive president opted to send a written address to Congress rather than appear in person. But in the twentieth century, a recognizable tradition emerged regarding how the State of the Union should be delivered. Today, that tradition constitutes a powerful constitutional norm that few can imagine deviating from.

What is the point of the State of the Union address? The nineteenth-century constitutional scholar Walter Bagehot distinguished between “dignified” and “efficient” elements of a constitutional system. Dignified elements are mostly symbolic, designed for public consumption and to maintain the outward appearance of competent and legitimate government. Efficient elements, by contrast, are those aspects of a constitution that truly are responsible for the day-to-day business of governing a country. People prefer the majesty of monarchy or the pomp and ceremony of well-oiled traditions than they do the reality of government, which can vacillate between the grotesque and the utterly mundane, Bagehot reasoned.

Without doubt, the State of the Union address is part of the dignified constitution. The tradition puts on show almost the entire U.S. political establishment, a political haut monde portrayed as congenial public servants intent on deliberating the issues of the day. The president takes care to craft remarks that emphasize the unity and strength of the republic and so will reassure ordinary members of the public. And the ritual of announcing a raft of new policies can be thought of as symbolizing the efficient workings of Washington: the supposed first stage in an orderly legislative process.

In truth, American government does not function in the way that the State of the Union portrays it. Indeed, a cynic might joke that there are precious few “efficient” elements of the American constitution left standing. With the Republicans in control of Congress and many in Washington already looking to 2016, President Obama is not the primary originator of new legislation; Congress will not follow his lead. Instead, President Obama will vie with Congressional leaders for the remaining part of his presidency. Each branch of government will push the limits of its constitutional authority to implement its own vision of what America should look like. When the two sides do pause to talk to each other, it will be to sling mud as often as to find agreement. As a result, the next two years will be decidedly undignified and likely inefficient, marked by pitched battles fought over “middle class economics” at home and “smart diplomacy” abroad.

President Obama’s penultimate State of the Union address thus told us little about how the business of government actually will be conducted over the next two years. But it was not supposed to. After all, any event that accurately portrayed the filthy business of sausage-making in Washington would be repulsive to behold. Instead, the State of the Union fulfils a different role in the American political system: it is a focal point of the political calendar; a rallying opportunity for both parties; and a chance for politicians, pundits and citizens alike to take stock. For all the pomp and ceremony—because of it, in fact—the State of the Union has a serious role to play in the overall order of things. If nothing else, last night’s event was enjoyable to watch—and that was the point.