Explained: Why ISIS Can Survive without Baghdadi 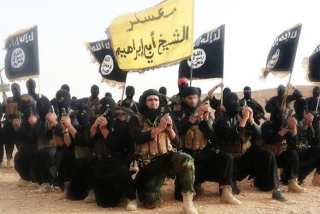 Martin Chulov at the Guardian reported last month that Abu Bakr al-Baghdadi, the leader of the Islamic State, had been “seriously wounded” in a coalition airstrike in al-Baaj, Iraq on March 18. Although al-Baghdadi’s injuries were life threatening at first, the report asserts he has since recovered. The report notes, however, that al-Baghdadi has not resumed day-to-day control of the organization, yet. Despite the Pentagon disputing this occurrence, the possible implications of targeting al-Baghdadi raise interesting concerns pertaining to the effectiveness of so-called “decapitation strikes” vis-à-vis the survivability of the Islamic State and its leadership, and consequently, the manner in which this should affect the coalition’s targeting practices.

One must note that al-Baghdadi was not deliberately targeted by the coalition air strike. In fact, this was an attack meant to target “local ISIS leaders” and, as Chulov specifies, “[coalition] officials did not know at the time that Baghdadi was in one of the cars.” This should raise concerns about the coalition’s intelligence gathering and targeting practices. The attack was designed to target the aforementioned ISIS leaders—and in that respect, it may have even succeeded—but the fact that coalition forces were entirely unaware of who else was present in the three-car convoy reemphasizes the fact that the United States does not know who it is targeting. This raises questions regarding the diligence with which these airstrikes are being carried out, especially with regard to collateral damage.

The efficiency with which these attacks are being carried out should also raise concerns. This incident would constitute the second time, after a dubious close call in November, that Baghdadi has been able to escape coalition airstrikes with his life. The inefficiency of these airstrikes, however, is unsurprising. Among different decapitation methods, research has shown that bombings are the least successful option, while raid and sweep operations are the most effective.  While some have been quick to emphasize the apparent success of the coalition’s airstrikes in targeting the Islamic State’s leadership, the long-term efficacy of this campaign is limited at best, and enormously counterproductive at worst.

The arguments in favor of conducting decapitation strikes are based on assertions that exaggerate the importance of charismatic leaders. Successfully targeting the leader, they argue, can create intraorganizational turmoil and potentially lead to organizational collapse. While some have called for a focused targeting of al-Baghdadi since “the supply of caliphs is not infinite,” such an approach should definitely not be the primary targeting focus of the coalition’s air strikes. Targeting the leadership through decapitation strikes is not an effective counterterrorism strategy, especially when dealing with a robust organization such as the Islamic State. Jenna Jordan, an Assistant Professor at the Sam Nunn School of International Affairs, posits a theory of organizational resilience wherein a terrorist group’s ability to withstand decapitation and degradation increases if it enjoys considerable public support and is highly bureaucratized. Although the extent of the Islamic State’s local support cannot be determined, it does enjoy sufficient support globally to be able to regenerate. The Islamic State is an organization with a strong hierarchical bureaucratic apparatus wherein, unlike his predecessors who kept power centralized, al-Baghdadi has built a power-sharing structure that effectively manages all aspects of the Islamic State’s operations. Decentralized and hierarchical organizations, like the Islamic State, are significantly harder to destabilize. Thus, invariably increasing the Islamic State’s ability to survive a change in leadership.

The Islamic State and its antecedents have, including the death of Al Qaeda in Iraq founder Ayman al-Zarqawi in 2006, survived multiple “forced” leadership transitions. In comparison with Al Qaeda’s sluggish response to the death of Osama bin Laden, the leaders of the Islamic State, believing al-Baghdadi’s wounds to be fatal, rapidly made plans to name a new successor. Given the operational environment within which AQI and MSM emerged, it should come as no surprise that the leadership of the Islamic State is more proactive in dealing with issues pertaining to the decapitation of its leadership. Such a dynamic approach in dealing with possible leadership changes further strengthens the Islamic State’s organizational resilience by minimizing any destabilization that could occur in the aftermath of a loss of its leaders.

In a more likely scenario, however, killing al-Baghdadi would immortalize him as a martyr and further serve to legitimize the Islamic State. The death of the so-called Caliph, especially at the hands of the so-called Western crusaders, may be perceived as a legitimate existential threat to the Caliphate and could thus prove to be the most effective recruitment ploy for the Islamic State yet. Although the Islamic State has focused primarily on local and regional objectives thus far, decapitating its leadership could lead to retaliatory strikes that would inevitably make the United States and the West more prominent targets. Furthermore, all speculation concerning al-Baghdadi’s targeted killing centers around it happening in the near term and fails to account for the very realistic possibility that, like Osama bin Laden, he could survive for many years to come. If al-Baghdadi is able to indefinitely escape being at the wrong end of a hellfire missile and the Islamic State continues to exist, its proto-State apparatus could be consolidated in a more concrete manner. In the event of such an eventuality, the chances of any significant instability in the Islamic State would diminish further and the likelihood of those living under the Islamic State’s rule to associate themselves as “citizens of the Islamic State” would also increase. In such a scenario, supporters, members and residents of the Islamic State would have as much, if not more, of a reason to fight for the Caliphate, with or without al-Baghdadi at the helm.

Al-Baghdadi’s Islamic State is a strong and robust organization that could very easily outlive its Caliph. In the pursuit of “degrading and destroying” the Islamic State, the coalition must ensure that their focus remains on delegitimizing and eliminating the threat posed by the organization and does not focus on eliminating its leader. Unlike some cases wherein decapitation strikes have been effective in dismantling terrorist organizations, the Islamic State is an ideologically charged entity possessing a strong organizational apparatus that is not dependent upon one man. This multitiered systemic resilience is the Islamic State’s strongest asset and poses the most dubious challenge to the coalition that hopes to eliminate the threat posed by them.

Pranay Ahluwalia is the Managing Editor of the Initiative for Policy Research & Analysis. Currently based in Geneva, he is pursuing a degree in International Relations. Any views expressed herein are the author’s own. Follow him on Twitter at @PranAhl.