Explained: Why Katrina was a Human-Made Disaster, Not a Natural One 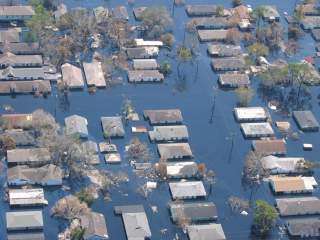 The flooding of New Orleans during Hurricane Katrina was a human-made disaster, not a natural one. The flood-protection system for the city had been poorly designed and maintained. It also turned out that a series of waterway engineering decisions to try to contain the flow of the Mississippi River and to facilitate river navigation to and from the Gulf of Mexico, were badly out of sync with the region’s ecosystem. In short, it was a failure of critical infrastructure at multiple levels that nearly doomed one of America’s major cities. Ten years later, what happened to New Orleans should serve as a forceful reminder of the costly consequences of hubris, denial, and neglect. Sadly, though, this attitude continues to characterize the relationship Americans have with their built and natural environments.

New Orleans’s primary line of defense against the sea and the Mississippi River has long been a levee and floodwall system. Unfortunately, that system saw little investment in the half century prior to Hurricane Katrina. The city is like a fishbowl, with the water on the outside and a half a million homes on the inside. New Orleans has been sinking at a rate of three feet per century, so that it lies at an average of six feet below sea level, with some neighborhoods as low as eleven feet below. Without the levees and floodwalls, much of the city would be a shallow lake.

When Hurricane Katrina made landfall it had hooked east, sparing the city its worst winds. But the waters from the storm found a ready path to assault the “Big Easy,” thanks to the construction of a 76-mile canal that was completed by the U.S. Army Corps of Engineers in 1968. The Mississippi River Gulf Outlet (MRGO), known locally as “Mr. Go”, was built to shorten the time and distance required for oceangoing vessels to transit from the Gulf of Mexico to the New Orleans waterfront. During Katrina this cement-sided waterway provided a ready path to funnel the storm surge originating from the Gulf of Mexico for a direct hit on New Orleans. As the hurricane came onshore, the water steamrolled down the MRGO on a collision course with the Industrial Canal, causing an 800-foot breach. Many of the communities to the east of New Orleans were victims of the overtopping of the MRGO. More than 80 percent of the city was flooded and nearly 250,000 residents were forced to flee; today the population is still nearly 100,000 below its pre-Katrina level.

Given its clear vulnerability to flooding, the haphazard management of New Orleans’ storm protection system prior to Hurricane Katrina is mystifying. Invading floodwaters not only put lives at risk, they created a toxic cauldron of debris that contaminated and scarred the urban landscape. Yet throughout the 1990s, federal funds that might have been used to repair and strengthen the city’s levees and flood walls and protect the pumping stations were bled off for other projects, such as widening the MRGO. In 2004, the Army Corps of Engineers asked for $22.5 million for storm protection projects for New Orleans. The Bush administration cut that budget request to $3.9 million and then dropped it to $3.0 million in 2005.

Sadly, the sense of denial and neglect of critical infrastructure that led to the near drowning of New Orleans in 2005 continues to endanger many U.S. cities today. Miami, Norfolk, New York, and Boston all face the twin risks of rising sea levels associated with climate change along with the likelihood of more frequent and intense hurricanes. Seattle sits astride the Cascadia subduction zone that belongs to the Pacific Rim’s seismically active “Ring of Fire,”and Los Angeles lies along the San Andreas Fault. In America’s heartland, cities such as St. Louis and Memphis could be devastated by an earthquake along the New Madrid Fault Line.

Across the nation, Americans have been taking for granted the critical infrastructure built with the sweat, ingenuity, and resources of earlier generations. Not only are we not upgrading it to keep pace with modern needs, Congress and state legislatures have been squandering this legacy by failing to adequately fund basic repairs and maintenance for roads, bridges, ports, wastewater and drinking water systems, dams, and levees, and the electrical grid and pipeline distribution systems. Even for “blue sky” days, our ongoing neglect of that infrastructure is a national disgrace. But as New Orleanians can attest, it translates into reckless endangerment when disasters strike.

For too long Americans have been pretending that disasters are rare and unknowable. Additionally, we have been resistant to making sensible investments in mitigation measures before storms occur, such as placing flood barriers around electrical substations or moving emergency generators out of basements to higher floors. Insanely, in the aftermath of disasters we have a national bad-habit of returning to “business as usual” by often allowing reconstruction in areas that will almost certainly be flooded again.

Hurricane Katrina, along with Hurricane Sandy in 2012, are reminders that the gravest source of danger for Americans derives not from acts of God or acts of terror but from our own negligence. The ongoing risk associated with disasters is far more knowable than we often assume and the means for mitigating their consequences are well within the reach of the most-advanced and wealthiest country in the world.

What has been in too short supply is the political will and leadership that will ensure our communities, metropolitan regions, and nation can better withstand, nimbly respond, recover, and adapt to the inevitable disasters heading our way. There are few more important imperatives that the next president will need to advance than bolstering national resilience.