Explained: Why Walker and Bush are BOTH Right on Iran 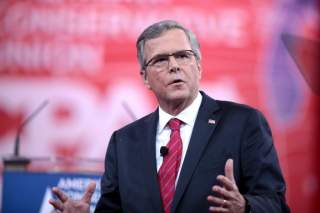 Two of the Republican candidates for president, Gov. Scott Walker and Gov. Jeb Bush, are in an argument over how the United States can best get out of the Obama nuclear agreement. This argument has now become the subject of press comment too: for example, by Steve Hayes in an article entitled “Bush-Walker Dispute Catches Fire Over Iran Nuclear Deal” in The Weekly Standard, and by CFR’s own Max Boot in a Commentary blog post entitled “Can the Iran Deal be Reversed on Day One?”

In my view the argument is not much ado about nothing, because both men are making strong and valid observations. They are both right–just right about different aspects of the problem opponents of the Iran deal face.

The argument began when Gov. Walker said “We need to terminate the bad deal with Iran on the very first day in office.” Bush then commented that “At 12:01 on January, whatever it is, 19th [2017], I will not probably have a confirmed secretary of state; I will not have a confirmed national security team in place; I will not have consulted with our allies. I will not have had the intelligence briefings to have made a decision. If you’re running for president, I think it’s important to be mature and thoughtful about this.”

Both men have expanded on their views. Gov. Bush stated his opinion this way to Hayes:

"I have repeatedly said is a terrible deal. Congress should reject it and it would be best to do so before Iran is given more than $100 billion in sanctions relief that they can use to further destabilize the region. Should it be upheld, as President I would begin immediately to responsibly get us out of this deal, with a comprehensive strategy that is responsive to the conditions at the time and confronts Iran’s continued pursuit of a nuclear weapons capability, its support for terrorism and instability, its ballistic missile proliferation, and its horrific human rights record. Such a strategy will require a new national security team that is committed to rebuilding our defenses and restoring our alliances, starting with our relationship with Israel. It will require sustained diplomatic efforts to put significant financial, diplomatic, and military pressure on Iran to change its behavior. And because of the massive sanctions relief provided by this terrible deal, the impact of unilateral U.S. sanctions will be limited and it will be important to work with our allies to reimpose multilateral sanctions and pressure."

Walker’s view was this:

"I believe that a president shouldn’t wait to act until they put a cabinet together or an extended period of time. I believe they should be prepared to act on the very first day they take office. It’s very possible – God forbid, but it’s very possible – that the next president could be called to take aggressive actions, including military action, on the first day in office. And I don’t want a president who is not prepared to act on day one. So, as far as me, as far as my position, I’m going to be prepared to be president on day one."

Bush’s argument is right in the sense that unraveling the agreement after 18 months, and against possible opposition from the British, French, and Germans (and other allies), will be complicated politically. If we intend to reimpose sanctions, we will want to let them know this and we will hope to get them on board (or at least mute their opposition). The new president will want to think about possible Iranian responses and how to blunt them as well. And Bush is right in saying that we need a comprehensive Iran strategy–something the Obama administration has lacked. Reversing the JCPOA is only part of that, and blunting Iran’s terror and aggression in the region are critical.

Some of the work needed can begin during the transition, which now starts after the nominating conventions–not, as was the case until 2012, after Election Day. Certainly, the President-Elect and Vice President-Elect can get full intelligence briefings, and these can be extended to the secretary of state-designate, national security adviser-designate, chief of staff-designate, and a few other top officials.

But it would be wrong to conduct an independent foreign policy during the transition. During the first part of it, in September and October, the candidate will only be a candidate–not President-Elect. And even when President-Elect, it’s wrong to act as if you’re president and start conducting your own foreign policy. Moreover, on “Day One” it is correct that the government will be manned by Obama holdovers in many key posts. The new secretary of state will just be arriving in his or her office on January 20th, and the assistant secretaries who must carry out the new policy will not usually be confirmed for weeks or months. (In 1981, I was confirmed as an assistant secretary of state in the new Reagan administration in mid-April. This was typical.) The National Security Council team can be selected during the transition and can be in place on January 21st, but will they have mastered their new responsibilities? Their own teams will consist almost entirely of Obama holdovers, likely for weeks or months. Because presidential records leave with the president, NSC file cabinets will be empty and it will be take time to figure out exactly who said what to whom when in the Obama years about Iran and the JCPOA. Moreover, won’t we want to talk with the Israelis and Arabs about all of this?

So Bush is right as a matter of governance. Gov. Walker is right in a different way: about international politics and psychology. Max Boot explained this well in his Commentary blog. It’s critical to send the strongest possible message that the JCPOA will not be a ten-year deal but an 18-month deal, because the United States will turn away from it under a Republican president. That message must come through loud and clear. European and other investors will start making calculations soon about how they will act next year, when sanctions are removed. Opponents of the deal want them to go slowly, figuring that they may be better off to wait until November, 2017 to see who is elected president. It’s true that the JCPOA, in one of the provisions most favorable and beneficial to Iran, grandfathers in contracts signed while the deal is in effect. But the reimposition of U.S. sanctions of various kinds can become very expensive for banks and companies, and the idea would be to tell them now that the United States will investigate and prosecute violations vigorously.

More generally, the goal is to affect everyone’s behavior: Iran, the Arabs and Israelis, investors and oil purchasers, and on and on. Here’s one example: switching to Iran as an oil supplier may seem less attractive if you’re not sure how easy it will be to purchase and ship the oil after January, 2017. But this is about more than sanctions: the goal is also to avoid defeatism by our friends in the Middle East. The danger is wide adoption of the view that Iran is the rising regional power now, the United States sees it as a partner, and countries had better just adapt. Gov. Walker is emphasizing the importance of sending a crystal-clear one-line message, that the deal and the policy it represents are dead if he is president.

In my view, both men are right–about the JCPOA, the difficulty of unraveling it, and the need both to do so and to say clearly now that we will do so. Because they are political opponents today, the differences between them are being stressed–and there are differences in emphasis, though also of style. But both Gov. Bush’s message and Gov. Walker’s carry serious points that were worth making.