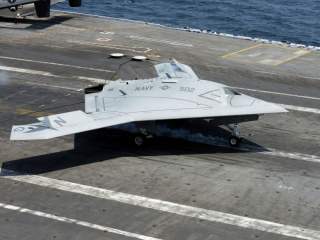 The U.S. Navy has chosen to develop an unmanned carrier-based aerial refueling tanker, instead of a robotic stealth bomber in a decision that, in effect, kills two birds with one stone.

Firstly, it gives the service a chance to learn how to operate a drone from a flattop. Secondly, the Navy needs an organic carrier-based aerial refueling capability to extend the range of its stealthy Lockheed Martin F-35C Joint Strike Fighters and Boeing F/A-18E/F Super Hornets. As an added bonus, it also takes some of the pressure off the hard-ridden tactical fighter fleet.

“I want to get something on the deck of an aircraft carrier—unmanned—as quickly as we can with a legitimate role to play because there is so much we have got to learn there,” Adm. John Richardson, U.S. Navy’s chief of naval operations, told an audience at the American Enterprise Institute on February 12. “So many unexplored questions.”

That is why the Navy has changed its strategy. While in previous years, the service had hoped to develop a modestly stealthy Unmanned Carrier Launched Surveillance and Strike (UCLASS) aircraft to afford the carrier air wing an organic persistent intelligence, surveillance and reconnaissance (ISR) and light strike capability, the new effort—called the Carrier-Based Aerial Refueling System (CBARS)—is a much more modest effort. Moreover, it’s a far cry from the ultra-stealthy, ultra long-range deep strike capability that many in Congress and the Washington think-tank community had originally wanted.

The Navy is choosing to follow a path of incremental evolution because the service does not yet fully understand how operate an unmanned air vehicle from a carrier. There are fundamental issues such as command and control, due regard and a host of other problems that need to be ironed out. The CBARS will help the Navy to create the fundamental infrastructure to develop and field more a sophisticated unmanned aviation capability from a carrier somewhere down the line.

The Navy is, Richardson said, “looking at something that can get us there, has a legitimate role—tanking and I would say ISR is on the table for sure—we’ll free up tactical aircraft by virtue of taking on that mission."

“But even more important,” he added, “we’ll learn how to integrate unmanned aircraft into our air wing.”

Despite the impressive results of the Northrop Grumman X-47B demonstrator, carrier-based unmanned aviation is its infancy. “There is just so much to learn now, and I want to get after that,” Richardson said. “In the meantime, the decisions that we make now, we’ll do our very best not to preclude increasing the platform’s capability in other areas as technologies come available, as we learn those lessons and we kind of grow into that.”

Meanwhile, don’t get too attached to the CBARS name—it’s a placeholder. “We’ll come up with something better than that,” Richardson said.