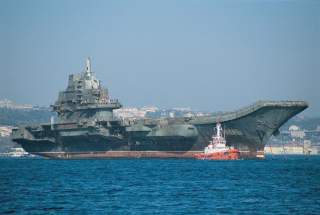 In a two part expose published over the weekend, the South China Morning Post gave the inside story of Xu Zengping’s quest to purchase China’s first aircraft carrier, which later became the Liaoning. The piece draws heavily on interviews with Xu himself.

Xu reveals that he first stepped foot on the Ukraine built vessel in 1988, although it didn’t go up for sale until 1992. At that time, it was around two-thirds complete.

The Ukrainian shipyard, who had been commissioned to build the carrier by Moscow in the early 1980s, was nearly bankrupt after the Soviet Union’s collapse and sought to find a buyer for the vessel. It approached the Chinese government about purchasing the vessel, but— seeking to repair ties with the U.S. following Tiananmen Square— Beijing demurred. Unhappy with this decision, some naval officials apparently approached Xu, the head of Chinluck Holdings, about purchasing the carrier at that time. Xu had previously served in the People’s Liberation Army before going into the “private” sector.

According to SCMP, the naval officials told Xu that there were two major impediments to purchasing the ship: “the navy was severely underfunded and there was no support in Beijing for the carrier project. If Xu took on the job, he would be taking a gamble on government policy.” Xu gleefully relays that he decided to move ahead despite these challenges. “My passion pushed me to take on the mission because it was a now-or-never chance for China to buy a new carrier from a nearly insolvent state-owned Ukrainian shipbuilder."

As Xu began laying the groundwork to purchase the vessel, he ran into another obstacle. Namely, the Ukrainian shipbuilder did not want the carrier to be used for military purchases. Xu overcame this impediment by deceiving the Ukraine officials into thinking he would use the carrier solely as a floating casino. To that end, he established a Macau-based shell company and acquired a gambling license. According to a 2011 report in Caixin, a prominent Chinese business newspaper, that gambling license was revoked the very day the carrier arrived in China. Under unclear circumstances it later fell into the military’s hands and was refurbished and launched as China’s first aircraft carrier in 2012, a decade after it arrived in China.

The carrier’s technology has been a boon for the Chinese navy. Despite claiming he would turn it into a casino, Xu demanded that they shipbuilder provide all the ship’s blueprints to him. And, in contrast to Beijing’s prior claims, Xu told SCMP that the vessel came with all four engines completely intact. “Xu Zengping disclosed that the militarily sensitive original engines of the carrier were intact when Ukraine sold the vessel in 1998. This is contrary to what Beijing told the world at the time,” SCMP reported.

Quoting a “source familiar with the deal,” SCMP said: “The Chinese side deliberately released false information about the removal of the engines to make it easier for Xu and the shipyard to negotiate.” A retired PLA Navy colonel told the Hong Kong newspaper that it is “very likely” that China’s carrier is still powered by Ukraine’s engines.

Xu’s machinations went beyond deception. For instance, Xu bribed his way into the Ukrainians’ good graces, with SCMP reporting that Xu flooded the shipbuilder’s management with “stacks of U.S. dollars.” Xu also boasts that he got the Ukrainians excessively drunk when negotiating the deal. During the four days of negotiations over the ship, Xu claims to have brought the sellers 50 bottles of 62-per-cent-proof Chinese liquor called erguotou.

In other words, if the story is true, Xu, covertly working on behalf of China’s Navy, lied, deceived and bribed his way into buying China its first aircraft carrier. The results appear to be worth it for Beijing. According to Xu, “some naval experts told me that my deal helped our country save at least 15 years of scientific research.”