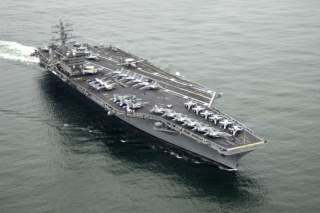 According to Bellingcat, new satellite images show that the mock-up of the USS Nimitz nuclear-powered aircraft carrier that Iran claimed to destroy back in February was actually towed back to port.

Back in March of 2014, CNN first reported, citing satellite images, that Iran was busy constructing a mock-up of the USS Nimitz at the Bandar Abbas port. Unnamed U.S. military officials at the time dismissed the mock-up, comparing it to a Hollywood prop.

At first Iran claimed that the mock-up was being built for a movie being filmed in the country. However, during military drills held in February of this year, Iranian state-run media outlets claimed that the aircraft carrier had been destroyed.

“A mock aircraft carrier was destroyed by the Islamic Revolution Guards Corps missiles during the IRGC Navy's massive Payambar-e Azam 9 (The Great Prophet 9) wargames in the Persian Gulf and the Strait of Hormuz,” Fars News Agency, which is close to the IRGC, reported at the time.

“The model was built in real size and came under attack and was destroyed by missiles and rockets fired from tens of IRGC speedboats. Also a number of the IRGC cruise and two ballistic missiles were fired at the mock U.S. aircraft carrier,” it added.

Video footage of the mock U.S. aircraft carrier coming under attack from Iranian missiles was aired extensively on Iranian state television. The footage did not show the aircraft carrier sinking, although many Western news outlets reported that it had been sunk.

Long before the February war games, Iran had built and sunk mock-ups of many other types of U.S. naval ships. For example, in May of 2014, Navy Rear Admiral Ali Fadavi, commander of the Islamic Revolutionary Guards Corps’ Navy, told Fars News Agency that: “We have been making and sinking replicas of U.S. destroyers, frigates and warships for many years."

(Recommended: U.S. Navy May Turn Every Ship into an Aircraft Carrier)

Fadavi also boasted at the time that Iran’s military is capable of sinking a U.S. naval ships in under a minute, and said, "We practice the same drills on replica aircraft carriers because sinking and destroying U.S. warships has, is and will be on our agenda."

Pentagon spokesman Col. Steve Warren dismissed Fadavi’s threats, joking to reporters that: "We are wholly unconcerned about the Iranians mockup of an American ship. My guess is you could sink the mock-up in 50 seconds."

Still, Iran’s targeting of replica U.S. naval vessels underscores its commitment to execute an anti-access/area-denial strategy towards the United States should Iran and America ever go to war. Although far less capable than other countries like China, Iran’s A2/AD capabilities could still create headaches for U.S. commanders in the Persian Gulf.