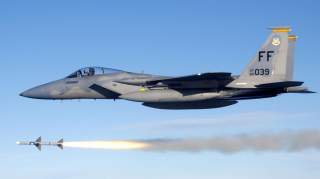 The Pentagon’s soon-to-be published Electronic Warfare strategy calls for increased investment in advanced electronic warfare technology designed to defend U.S. assets and proactively use the electromagnetic spectrum to attack enemies. The Army, Navy and Air Force are working on EW upgrades for the F-15, counter IED EW and the Growler Electronic Attack Aircraft.

DOD officials say the new strategy will be signed and distributed in the next two months, with additional annexes expected to be ready by Summer, 2017. The strategy will be an unclassified document to be shared with U.S. military developers and defense industry officials, Pentagon officials said.

Scout Warrior has learned of some key elements featured in the report, such as increasing EW attack technology, advancing new systems and training and equipping EW forces.

The prospect for a “first-of-its kind” DOD electronic warfare strategy gained new urgency following Russia’s successful use of advanced EW technologies in Ukraine, and the pace of global technological progress in the area of EW systems.

Electronic weapons can be used for an increasingly wide range of combat activities – from detecting and defending IED attacks to jamming enemy communications or even taking over control of enemy drones, among other things.

“Hardening the kill-chain,” for example, can involve the use of EW tactics to prevent an armed U.S. drone from being “hacked,” “jammed” or taken over by an enemy. Also, EW defenses can better secure radar signals, protect weapons guidance technologies and thwart attacks on larger platforms such as ships, fighter jets and tanks.

The concept behind this effort to advance the cost curve and, for example, use less-expensive electromagnetic weapons to destroy, intercept or jam approaching enemy missiles, drones, rockets or aircraft; this is based on the reality that using an electronic weapon is much less expensive than firing an interceptor missile, such as a ship-fired Rolling Airframe Missile or Evolved Sea Sparrow Missile, to destroy an enemy cruise missile. These interceptor missiles, and other ship-defense technologies, can cost up to hundreds of thousands each, if not more.

This tactic would both force enemies to spend money on expensive weapons while decreasing the offensive and defensive weaponry costs to the U.S., therefore advancing a “cost-imposing” strategy, as Cabiness explained.

Improving electronic warfare modeling and simulation to better prepare for emerging weapons systems is also emphasized as a key element of the strategy. This can help anticipate or train against future weapons applications which may not exist yet, but nevertheless pose an emerging threat.

The purpose of this committee is to translate electromagnetic experimentation into actual capabilities being deployed, as reported by Federal Computer Weekly earlier this year.

The committee is co-chaired by Frank Kendall, the Defense Department's top acquisition official, and Gen. Paul Selva, vice chairman of the Joint Chiefs of Staff.

The new strategy is designed to inform and operation alongside existing Army, Navy and Air Force efforts to engineer next-generation electronic warfare systems.

The Air Force is, for example, revving up electronic warfare upgrades for its F-15 fighter to better protect against enemy fire and electronic attacks, service officials said.

Various upgrades will be complete as early as 2021 for the F-15C AESA (Active Electronically Scanned Array) radar and as late as 2032 for the various EW (electronic warfare) upgrades, Air Force officials said.

The F-35 Joint Strike Fighter is also integrated with an AESA radar.

The Next-Generation Jammer, or NGJ, consists of two 15-foot long PODs beneath the EA-18G Growler aircraft designed to emit radar-jamming electronic signals; one jammer goes on each side of the aircraft.

The NGJ departs from existing EW systems in that it can jam multiple frequencies at one time, increasing the scope and effectiveness of attacks. This better enables U.S. aircraft to elude or “jam” more Russian-built air defenses able to detect aircraft on a wide range of frequencies, such as X-band, VHF and UHF. Russian-built S-300 and S-400 air defenses are believed to be among the best in the world.

Radar technology sends an electromagnetic ping forward, bouncing it off objects before analyzing the return signal to determine a target's location, size, shape and speed...etc.  However, if the electromagnetic signal is interfered with, thwarted or "jammed" in some way, the system is then unable to detect the objects, or target, in the same way.

It will be the only AESA-based carrier offensive electronic attack jamming pod it DoD.

The new jammer is designed to interfere with ground-and-air based threats such as enemy fighter jets trying to get a missile "lock" on a target, developers explained.

The Army is progressing with an EW modernization plan which, among other things, seeks to engineer new systems with an “open architecture” approach such that they can be efficiently upgraded with new technologies as they emerge. Existing hardware, for instance, can be updated with new software when new enemy higher-tech threats emerge.

Since the beginning of the wars in Iraq and Afghanistan and the emergence of the Improvised Explosive Device (IED) or roadside bomb as a major threat, the Army has succeeded in fielding a host of technologies able to thwart or “jam” the incoming signal from a Radio-Controlled IED (RCIED), thus delaying or preventing detonation and potential injury to Soldiers.

Some of the jammers fielded during the initial years of the war, such as the vehicle-mounted Duke V2 and Warlock jammers, informed subsequent upgrades designed to defeat a greater range of threat signals. For instance, the Duke V3 vehicle-mounted jammer, now fielded on thousands of vehicles in theater, represents a technological improvement in capability compared to prior systems.

The Thor III is a Soldier-portable counter RCIED “jamming” device designed to provide a protective envelope for dismounted units on patrol. The device is configured with transceivers mounted on a back-pack-like structure engineered with hardware and software able to identify and “jam” RF signals operating in a range of frequencies. Thousands of Thor III systems, which in effect create an electromagnetic protective “bubble” for small units on-the-move, continue to protect Soldiers in theater.

GATOR V2 is a 107-foot retrofitted surveillance tower equipped with transmit and receive antennas designed to identify, detect and disrupt electronic signals. The GATOR V2 is engineered to establish a direction or “line of bearing” on an electronic signal; it is also configured to use software, digital mapping technology and computer algorithms to “geo-locate” the origin or location of electronic signals within the battle space.

The Wolfhound is a radio frequency direction-finder engineered to locate enemy command and control nodes. The system, fielded as a QRC in 2009, is able to geo-locate RF transmitters operating in certain frequency bands, thus providing Soldiers with key battle-relevant threat information. Wolfhound can be Soldier or vehicle-mounted.