F-35: Is America's Most Expensive Weapon of War the Ultimate Failure? 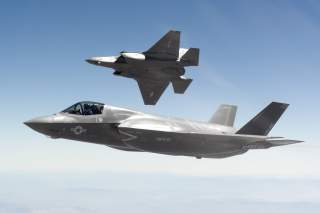 Jim Roche, then-Secretary of the Air Force, made an announcement on October 26, 2001, that all aviation enthusiasts had been waiting for: a winner had been picked to design and build the Joint Strike Fighter. The American people were assured the new jet would enter service in 2008 and be a high-performance replacement for the military’s aging airframes while only costing between $40 million and $50 million.

The F-35 has now entered an unprecedented seventeenth year of continuing redesign, test deficiencies, fixes, schedule slippages, and cost overruns. And it’s still not at the finish line. Numerous missteps along the way—from the fact that the two competing contractors, Lockheed Martin and Boeing, submitted “flyoff” planes that were crude and undeveloped “technology demonstrators” rather than following the better practice of submitting fully functional prototypes, to concurrent acquisition malpractice that has prevented design flaws from being discovered until after production models were built—have led to where we are now. According to the latest annual report from the Director, Operational Test & Evaluation (DOT&E), 263 “high priority” performance and safety deficiencies remain unresolved and unaddressed, and the developmental tests—essentially, the laboratory tests—are far from complete. If they complete the tests, more deficiencies will surely be found that must be addressed before the plane can safely carry our Airmen and women into combat.

Despite this, the F-35 Joint Program Office now intends to call—quite arbitrarily—an end to the plane’s development phase and developmental testing. Instead of completing the presently planned development work, the Program Office is now proposing to substitute a vaguely defined F-35 upgrade program called “continuous capability development and delivery (C2D2).” The DOT&E report states flatly that this plan, as proposed, is “not executable due to inadequate test resources” in the rapid timelines proposed.

It doesn’t require inside information to understand that the proposed plan is just a way to hide major development delays and cost overruns while facilitating increased annual production buys of incompletely developed F-35s. Twenty-three fully designed, fully combat-capable F-35s are supposed to begin the all-important—and more rigorous—operational testing before the end of 2018, yet it is impossible to fix the 263 known Priority 1 and 2 deficiencies in time to meet that schedule.

This clearly doesn’t bother the senior Pentagon officials who are pushing to move forward with production despite the unresolved deficiencies. Already, 235 of the deficiency-ridden aircraft have been nominally designated “combat ready” and delivered to active Air Force and Marine Corps squadrons. The consequences of this plan for safety and effective tactics in operational unit training, let alone combat, are unknown. Defense Department officials who approved cutting short the F-35’s development phase should, and hopefully will, be held accountable when the inevitable consequences in safety, combat effectiveness, and cost overruns emerge.

As initially advertised, and throughout the program’s development, taxpayers have been told this exorbitantly costly system is necessary to combat advanced future threats. However, testing results show that the planes already delivered cannot even effectively address the current threats. That’s a problem.

In September 2016 then-Air Force Secretary Deborah Lee James certified to Congress that the F-35As to be delivered in FY 2018 would have full combat capabilities. (James was referring to the Block 3F aircraft to be produced this year.) But according to the DOT&E report, the current much-delayed testing schedule means that won’t be possible—they’re not even close to combat-ready. Left unsaid in the report is the uncomfortable fact that the 359 F-35s funded before FY 2018 are also lacking combat capability.

The F-35 contract mandates that it must match or exceed the combat capabilities of legacy aircraft, especially in the air-to-air, deep strike, and close air support missions. In the crucial close support mission, the venerable and battle-proven A-10 is one of the aircrafts the F-35 was designed to replace. As of now, testing shows the F-35 is incapable of performing most of the functions required for an acceptable close support aircraft, functions the A-10 is performing daily in current combat.

One of the many deficiencies reported is the F-35’s inability to reliably hit targets with its cannon. The problem is most pronounced with the Air Force’s F-35A, the version of the aircraft that would replace the A-10. This variant has an internally mounted cannon. The F-35B (Marine Corps) and F-35C (Navy) both use an externally mounted cannon pod. A footnote in the report states

“Flight testing of the different gun systems on the F-35 (internal gun for F-35A and external gun pods for the F-35B and F-35C) revealed problems with effectiveness, accuracy, pilot controls, and gunsights displayed in the Helmet Mounted Display System (HMDS). The synopsis and assessment of specific HMDS problems are classified.”

For example, the testing teams at Naval Air Weapons Station China Lake in California began conducting air-to-ground tests of the cannon in February 2017, but had to take an extended break when they noticed the sights in the pilot’s Helmet Mounted Display System—the infamous $600,000 helmet—did not line up properly with the cannon. The paused tests were completed more than six months later in September 2017 after a tentative fix had been installed. But the F-35’s cannon still had an “uncharacterized bias toward long and right of the target,” resulting in pilots “consistently missing ground targets during strafe testing.”

Even if the designers are eventually able to fix the sighting problems, the design of the plane itself hinders using the cannon for the close support mission. Effectively employing the cannon requires the aircraft to fly low and close to the target and to survive ground fire, an impossibility for an aircraft as thin-skinned and highly flammable as the F-35.

The Joint Program Office and Air Force leaders would have you believe that such deficiencies are minor because shooting targets with a cannon is old-fashioned. They prefer to strike targets from long distances with precision munitions, like the current guided bombs or the yet-to-be-fielded Small Diameter Bomb II. But troops and ground controllers in daily combat in Afghanistan, Iraq, and Syria know differently and understand just how critical to their survival it is to have an aircraft that can place accurate fire on enemy troops close to their positions.

In the air-to-air mission, the current F-35 is similarly incapable of matching legacy aircraft like the F-15, F-16, and F-22. For long-range aerial engagements using the existing beyond visual range missile, the AIM-120 medium-range air-to-air missile (AMRAAM), the report notes problems integrating the missile with the aircraft, as well as deficiencies with the control and display system. These problems are severe enough that F-35s armed with AMRAAMs cannot “support” the “kill chain,” or the entire process of destroying a target from detection to evaluating the results of a strike.

Even that is not the end of the combat-related deficiencies. All of the combat capabilities in the F-35 depend on the software running the aircraft’s systems. The program has already gone through multiple major software revisions. The Marine Corps declared its first F-35s operational—that is, combat-ready—with version Block 2B software while the Air Force did the same with Block 3i. Both had such limited capabilities that they could not fire guns, short-range air-to-air missiles, or small, close-support-capable guided bombs. Both are to be superseded by the allegedly “fully combat capable” Block 3F software. This latter version is just now entering the fleet, yet its design and testing are still far from complete; it has already received myriad patches, and problems are still being discovered. In October 2017, the program released version 3FR6.32, the thirty-first version of Block 3F software.

Important deficiencies remain. The aircraft’s earlier block 2B software version did not allow the pilot to confirm target coordinates sent to the plane’s guided bombs. The new Block 3F “fully combat capable” software allows the pilot to see what coordinates he sent to the weapons, but not the coordinates that are actually loaded into the bomb. Without being able to confirm that the coordinates are properly entered into the weapon, it is impossible to be sure it will guide to the intended target. The rules of engagement in combat zones often require pilots to fully confirm to the ground controller that the guided weapon is loaded with the correct target coordinates before firing—an essential precaution to prevent friendly fire casualties.

Another problem the F-35 has in a ground attack role is that its systems in many ways hurt rather than help the pilot gain an accurate picture of the battle scene he is supporting. For an A-10 pilot flying low and slow over the battlefield, this process could be as simple as seeing the friendly troops shooting at a target as the ground controller says, “follow my tracers.” For an aircraft like the F-35, which needs to fly at altitudes generally over 15,000 feet to remain safe from ground fire, this process has to be done through a video downlink where the ground controller establishes a connection with the F-35 and can see the same screen images as the pilot. In situations where A-10 and F-16 pilots need to do the same, they can get an excellent view of the battlefield through the Sniper and LITENING Advanced Targeting Pods mounted to their aircraft, which are currently flying in combat on a daily basis. Pilots flying the F-35 aren’t so fortunate because engineers have not been able to get its video downlink system to work. Instead ground controllers and F-35 pilots at 15,000 feet are forced to try confirming targets by voice radio, a process much hindered by the “poor fidelity” of the images seen through the F-35’s Electro-Optical Targeting System, as reported by DOT&E.