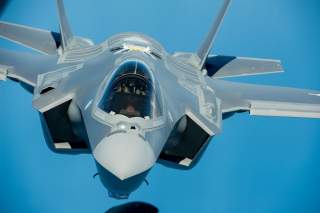 The Air Force Chief Scientist said F-35 pilots will be able to control a small group of drones flying nearby from the aircraft cockpit in the air, performing sensing, reconnaissance and targeting functions.

In the future, drones may be fully operated from the cockpit of advanced fighter jets such as the Joint Strike Fighter or F-22, Air Force Chief Scientist Greg Zacharias told Scout Warrior in an interview.

“The more autonomy and intelligence you can put on these vehicles, the more useful they will become,” he said.

The early phases of this kind of technology is already operational in the F-35 cockpit through what is called “sensor-fusion.” This allows the avionics technology and aircraft computer to simultaneously organize incoming information for a variety of different sensors – and display the data on a single integrated screen for the pilot.  As a result, a pilot does not have the challenge of looking at multiple screens to view digital map displays, targeting information or sensory input, among other things.

Navy Secretary Ray Mabus has said that the service's carrier-launched F-35C will be the last manned fighter produced, given the  progress of autonomy and algorithms allowing for rapid maneuvering. The Air Force, however, has not said something similar despite the service's obvious continued interest in further developing autonomy and unmanned flight.

While computer processing speed and algorithms continue to evolve at an alarming pace, it still remains difficult to engineer a machine able to instantly respond to other moving objects or emerging circumstances, Air Force scientists have argued.

However, sensor technology is progressing quickly to the point where fighter pilots will increasingly be able to identify threats at much greater distances, therefore remove the need to dogfight. As a result, there may be room for an unmanned fighter jet in the not-too-distant future, given the pace of improving autonomous technology.