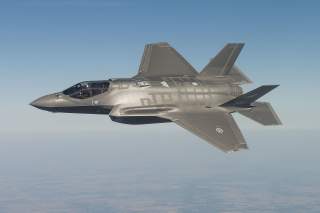 The Air Force expects to operationalize the F-35’s latest “3F” software iteration by October or September of this year, a development which will integrate additional technology and equip the stealth aircraft with a wider range of weapons such as the Small Diameter Bomb and AIM-9X, service leaders said.

After experiencing some challenges during developmental testing, the 3F software drop is now improved and sharpened up for delivery, Brig. Gen. Scott Pleus, director, F-35 Integration Office, told Scout Warrior amidst a small group of reporters.

Engineers made specific efforts to identify and resolve any emerging issues, he explained.

“They are encouraged by the things that they found during developmental testing. They have not seen any show-stoppers in stability or capability at all. There are no ongoing issues with the things they repaired,” Pleus said. “Pilots are very encouraged by what they have seen.”

Many of the JSF’s combat capabilities are woven into developmental software increments or “drops,” each designed to advance the platform’s technical abilities. There are more than 10 million individual lines of code in the JSF system.

The F-35 took off from Edwards Air Force Base, Calif., and launched the missile at 6,000 feet, an Air Force statement said..

Following Block 2B, Block 3i increases the combat capability even further, and Block 3F will bring a vastly increased ability to suppress enemy air defenses.

Called 3F, the service is already working on a 4th drop to be ready by 2020 or 2021. Following the drop of 3F, the aircraft will incorporate new software drops in two-year increments in order to stay ahead of the threat.

Block 4 will also increase the weapons envelope for the U.S. variant of the fighter jet.  A big part of the developmental calculus for Block 4 is to work on the kinds of enemy air defense systems and weaponry the aircraft may face from the 2020’s through the 2040’s and beyond.

In terms of weapons, Block 4 will eventually enable the F-35 to fire cutting edge weapons systems such as the Small Diameter Bomb II and GBU-54 – both air-dropped bombs able to destroy targets on-the-move.

The Small Diameter Bomb II uses a technology called a tri-mode seeker, drawing from infrared, millimeter wave and laser-guidance. The combination of these sensors allows the weapon to track and eliminate moving targets in all kinds of weather conditions.