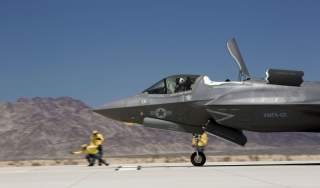 With the United States Marine Corps purchasing the bulk of the Department of the Navy’s (DON) planned fleet of 680 Lockheed Martin F-35 Joint Strike Fighters, the service will likely form the dominant component of naval tactical aviation in the coming decades. The implication is that by the 2030s, it will be the Marine Corps’ aviation assets that will be projecting power deep into heavily defended airspace from the sea instead of the Navy’s full-sized flattops. Meanwhile, the Navy’s vaunted carrier air wings will still be dominated by fourth-generation Boeing F/A-18E/F Super Hornet with a small number of F-35Cs supplementing them—leaving the $13 billion warships with limited ability to fight against high-end threats.

As Lt. Gen. Jon Davis, the Marine Corps’ deputy commandant for aviation, pointed out during an event at the American Enterprise Institute on July 29, the service is willing to fight to the death to buy all 420 Joint Strike Fighters—353 F-35B short takeoff/vertical landing models and 67 F-35C carrier variants—it has on the books. Effectively, that would give the Marine Corps the lion’s share of the DON tactical air assets that could effectively fight in a threat environment that is dominated by advanced Russian and Chinese-built integrated air defense systems (IADS) like the S-300 and S-400.

One scenario called for a four-ship of F-35Bs to launch from an amphibious assault ship into a “double-digit” (examples might include S-300 or Buk-M1) surface-to-air missile and high-end fighter threat environment to hit a strategic target. While such a mission might be “marginally successful”—at best—when flown by a dozen or more aircraft like the Hornet, the four F-35Bs completed the scenario with near impunity. “It was like watching a pack of dogs going after something,” Davis said.

In the second scenario, the Marines performed a high-end close air support mission “through the clouds” (1000ft overcast) with two F-35Bs configured as “bomb trucks” —with a heavy external payload—and another two jets configured with internal weapons. The four jets completed the mission in five and half minutes by digitally transmitting imagery to and from the ground using datalinks to coordinate with ground forces and release weapons. “It was a work of art,” Davis said.

But the F-35B is not perfect—the aircraft has a relatively short-range and limited internal payload. Nor does the F-35B solve the basing problem. In the Western Pacific—for example—amphibious assault ships and even the distributed bases envisioned by the Marines could come under heavy, sustained cruise and ballistic missile attack, which could bring operations to a halt. However, the F-35B will be more capable of fighting inside heavily defended airspace than a Super Hornet could ever be. It will also be much more capable against advanced enemy air threats using a combination of stealth and long-range missiles.

Meanwhile, the Navy is doubling-down on the Super Hornet and its F/A-XX follow-on—which is currently being conceptualized as little more than an improved “F/A-18E/F-like” aircraft. “Naval aviation has got to get beyond the calcification and thinking that is inherent to older designs in order to be able to keep the aircraft carrier relevant in the future security environment that’s going to be dominated by advanced surface-to-air missile systems like the S-300 and S-400,” Jerry Hendrix, director of the Defense Strategies and Assessments Program at the Center for a New American Security, told The National Interest earlier.

Bryan Clark, a senior fellow at the Center for Strategic and Budgetary Assessments with close ties to the Navy, said that without the F-35C, the service knows it is lacking the ability to fight inside heavily defended airspace. “They just have a challenge in countering IADS, particularly since the Navy doesn't yet have a 5th generation aircraft and their aircraft will still lack the ability to operate from the range where the carrier can be survivable in the early phases of a conflict,” Clark said. “It may be in future conflicts we will rely on stealthy bombers and ship/sub-launched missiles for the initial air defense rollback, supported by the CVW for jamming and escort missions. The CVW will then conduct strikes directly after anti-ship capabilities have been degraded and the CVN can pull in close enough to generate enough sorties to mount larger strike salvos.”

But Clark defended the Navy’s concept of developing a future F/A-XX sixth-generation fighter as a somewhat improved version of an “F/A-18E/F-like” machine—a ‘super’ Super Hornet. “The idea the CVW by itself has to be able to overcome S-300s and S-400s [doesn’t] really make sense. Also, we're moving away from relying on a set of airplanes being able to defeat IADS. It will require a combination of expendable decoys and jammers, standoff weapons, standoff jamming aircraft, and relatively large salvos of weapons from larger aircraft,” Clark said. “We're used to the CVW primarily doing strike warfare based on our last 30 years of experience. Maybe it will need to go back to its historic role of SUW [surface warfare], DCA [defensive counter air], and OCA [offensive counter air]. For example, the Navy is looking at ways the CVW can support bombers by acting as escorts and doing DCA.”

Bryan McGrath, managing director of the FerryBridge Group naval consultancy, said that the F-35 program has scarred the Navy’s aviation acquisitions community—leaving it too timid to make the right decision. “The case for the carrier will suffer if the Navy drags its feet on what comes next in the airwing,” McGrath said. “We can, should, and must design and build a largely unmanned semi-stealthy long range carrier strike aircraft purpose built for carrier aviation. And we need organic tanking. And we need —again—organic sea control aircraft. Always remember—the carrier doesn’t care what it launches and recovers. It is just a floating airport. The airwing is the key. Get the airwing wrong—or continue to—and yes, the CVN investment makes less sense. But this is a tail/dog story.”