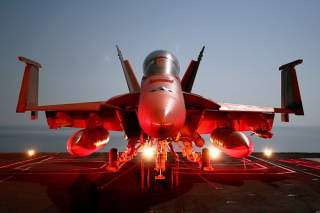 The U.S. Navy needs to start conducting an analysis of alternatives (AOA) this year if intends to field a successor to the Boeing F/A-18E/F Super Hornet by 2035. If one were to assume a best-case scenario, that would be the earliest a new clean sheet F/A-XX aircraft design could be developed and built, multiple industry sources agreed.

The Navy is hoping to start an F/A-XX AOA this fall, but there is no set official start date yet, the industry source noted. The outgoing chief of naval operations, Adm. Jon Greenert has signed the F/A-XX initial capabilities document. But the document still has to clear the Joint Requirements Oversight Council and undergo a Materiel Development Decision (MDD) Defense Acquisitions Board (DAB) review before an AOA can formally kick-off. “The DAB has not been scheduled the last I heard,” the industry official said.

If the Navy managed to get a formal AOA underway this fall, then the service could enter into a Milestone A technology development phase somewhere between 2018 and 2019. Following an optimistic timeline, the F/A-XX program could reach a Milestone B source selection decision in 2025, one industry source said. Then, the engineering and manufacturing development phase would take about ten years.

That would allow for a 2035 entry into service date for the new aircraft. But, the industry source cautioned, that’s a best-case scenario. “That’s being optimistic,” the industry official said. “If you apply F-22 or F-35 timelines to that, it’s even worse.”

The problem for the Navy is that by 2035, the service’s existing Super Hornets will have burnt through most of their allotted 6000 hour airframe lives. The average age of the F/A-18E/F fleet will be more than 25 years old—ancient for a carrier-based strike aircraft.

The F-35C, assuming the Navy buys the its entire allotted number of aircraft, will only make up half the carrier air wing at that point. If the current trend continues, the Navy could end up being short by up to 12 fighter squadrons worth of tactical aircraft. That’s more than 140 aircraft.

The Navy expects to extend the service lives of the F/A-18E/F fleet to 9000 hours for the entire inventory. But the industry source notes that the Navy’s existing depot maintenance facilities were never intended to extend the lives of this many aircraft. Extending the life of the entire Super Hornet fleet is going to be expensive, and moreover, as the jets age they cost exponentially more to maintain per flight hour. “But even with a 9000 hour Super Hornet, you don’t make it to 2035 with enough of your inventory,” the official said. “There is a still a deficit there.”

There is already a massive backlog of jets that need servicing—but that’s a problem that mainly impacts the U.S. Marine Corps’ geriatric classic model Hornet fleet, Navy, Marine Corps and industry officials agreed. The industry official said that the Navy has avoided much of the backlog by converting fighter squadrons over to the Super Hornet without holding any F/A-18E/F airframes back as an attrition reserve.

What it likely won’t include is an ultra long-range, deep penetrating unmanned bomber, but it might include a handful of very long-range penetrating intelligence, surveillance and reconnaissance assets to identify and provide targeting data to the rest of the fleet. “Maybe you build a new high-end UAV that can get in there and do targeting. Targeting is your biggest problem, not deep penetrating strike,” the industry official said. “Once you know the target and have a weapons quality track, you have lot of different options to hit it in an anti-access environment.”

But until the AOA is complete, exactly what form the F/A-XX will take is an open question.  The AOA won’t develop a fighter or even the requirements for the F/A-XX, it will however inform the capabilities development document from which the request for proposals to industry will be derived. “That just takes so much time,” the official said. “Best case scenario is a Milestone A in 2019, and if you at the Navy’s budgets that’s going to be a hard thing to do.”