Fact: America's New Nuclear-Armed Submarines Must Serve for 42 Years (Until the 2080s) 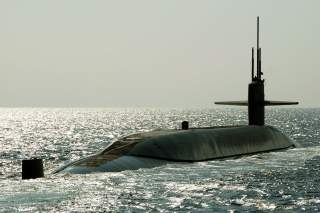 The new Ohio Replacement Program nuclear-armed submarines will serve into the 2080s; They Are Designed to Prevent a Catastrophic 1st Strike Massive Nuclear Attack on the U.S.

“This platform is being designed for 42 years of service life. It has to survive into the 2080s and it has to provide a survivable, credible deterrent threat,” Capt. David Goggins, Ohio Replacement Program Manager, told Scout Warrior in an interview months ago in 2016.

The Navy is only building 12 Ohio Replacement submarines to replace 14 existing Ohio-Class nuclear-armed boats because the new submarines are being built with an improved nuclear core reactor that will better sustain the submarines, Navy officials have said.

The Ohio Replacement Program is also engineering a new electric motor for the submarine which will turn the shaft and the rotor for the propulsion system. The new motor will make propulsion more efficient and potentially bring tactical advantages as well, Goggins explained.