Fact: Some of Russia and America's Best Tanks Might Be Going to War (On the Same Side) 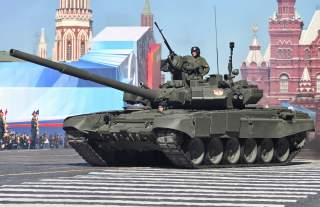 "The contract is being implemented in accordance with the schedule approved by the parties," Russia’s Federal Service for Military and Technical Cooperation told the TASS news agency at the Dubai Airshow 2017.

The T-90S and SK are export versions of the Russian Ground Forces T-90A. The SK model is a command tank that is fitted with additional radios. The T-90 itself is a development of the older T-72, which the Russian government decided to settle on after the more sophisticated T-80 proved to be a disaster during the wars in Chechnya.

The T-90 is essentially a T-72 upgraded with the more advanced systems found on the T-80U, but ditches the T-80’s troublesome gas turbine engine. Instead, the most common version of the T-90 uses a 1000hp diesel engine—which gives it a somewhat less than ideal power-to-weight ratio. The T-90 adds a new laminated armor package, explosive reactive armor and an electronic countermeasures suite. It retains the standard 125mm gun.

While its origins lie in T-72, the T-90 is an excellent tank that is far less costly than its Western counterparts like the Leopard 2 or M1A2 Abrams.

The robust T-90 has proven to be effective in Syria against ISIS and rebel forces. Iraq, which faces, similar problems, will likely use the tank in a similar manner against various insurgent groups. The war-torn Middle Eastern country is winding a campaign against the ISIS terrorist organization, but the country remains fragile.