A Fact on Syria: Regime Change Is a Bridge Too Far 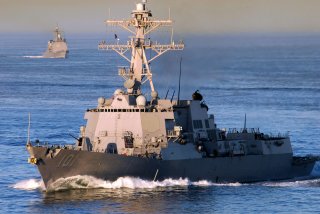 This strike was an appropriate, proportional, and carefully calibrated response for the Assad regime’s repeated use of illegal chemical weapons.

While it was a bold tactical strike that sent a powerful message that Syrian President Bashar Assad’s behavior was unacceptable, it is merely the opening bid in what is likely to develop into a protracted diplomatic crisis.

Trump reacted viscerally to the pictures of poisoned babies and moved decisively to launch the punitive reprisal. But that limited military action is unlikely to be decisive in and of itself.

Since the missile strike, Assad has already sent warplanes from the same base to bomb the rebel-held village of Khan Sheikhoun again, this time with conventional weapons.

Russian President Vladimir Putin, whose government guaranteed that Assad had given up all his chemical weapons in 2013, has chosen to remain entrenched in denial.

Moscow has raised the stakes by dispatching a Russian destroyer to patrol off Syria’s coast and by ending the deconfliction arrangement, which had lowered the risk of Russian-American military clashes in the skies over Syria.

Secretary of State Rex Tillerson travels to Moscow on Tuesday to further engage diplomatically on Syria with Putin’s government. But the prospects for a quick resolution of the crisis are very poor.

No good deed goes unpunished in the Middle East. The Trump administration should keep this in mind, as well as the experience of past U.S. administrations, as it charts its future course.

But that humanitarian aid mission was later expanded into a failed nation-building experiment by the Clinton administration, which discovered that one of the biggest obstacles to feeding starving Somalians was pilferage of food supplies by warlords leading local militias.

This oxymoronic “humanitarian war” in Somalia saw U.S. troops back up a United Nations peacekeeping force and clash with fierce local militias, some of them trained and assisted by al-Qaeda.

The death of 18 American special operations troops in Mogadishu in October 1993, when two of their helicopters were shot down, led to the termination of the operation in 1994.

Humanitarian operations also produce unintended consequences. The U.S. humanitarian intervention in Somalia was perceived as an unacceptable act of imperialism by Osama bin Laden, then living in nearby Sudan.

Al-Qaeda launched its first attack on Americans in December 1992 when it planted a bomb in a hotel in Yemen, which was being used by U.S. Marines traveling to Somalia to assist the food distribution. Although the Marines had already departed, two people were killed at the hotel.

President Ronald Reagan was not so lucky when he dispatched U.S. Marines to Lebanon as part of an international peacekeeping force to stabilize that country in 1982 after Lebanese President-elect Bashir Gemayel was assassinated by a Syrian agent.

As a result, the international peacekeeping force was withdrawn in 1984 and Lebanon increasingly fell under the malign influence of Syria and Iran for years after that.

If Trump now introduced U.S. troops into Syria, they too would become a lightning rod for Islamist terrorism launched by al-Qaeda, ISIS, or Hezbollah and other Shiite extremist militias from Iraq, which Iran has deployed to prop up Assad.

The Trump administration should bear this in mind and rule out the idea of expanding its current military commitment to destroy ISIS in eastern Syria into a broader military push to topple Assad.

Washington has warned that it will take prompt action if the Assad regime launches another chemical attack.

U.S. Ambassador to the U.N. Nikki Haley, who has quickly emerged as the moral voice of the administration, told a special session of the U.N. Security Council on Friday that: “The United States will no longer wait for Assad to use chemical weapons without any consequences. Those days are over.”

She warned that “[the] United States took a very measured step last night. We are prepared to do more, but we hope that will not be necessary.”

It would be foolhardy for Assad to use chemical weapons again. If he did, Trump could respond with a targeted strike on Assad similar to Reagan’s 1986 airstrike targeting Libyan dictator Muammar Qadhafi.

Reagan clearly did not expect to end Libyan terrorism in a one-shot quick fix when he launched the 1986 airstrike. He described the reprisal as “but a single engagement in a long battle against terrorism” and threatened future reprisals if Qadhafi continued to support terrorist attacks against the U.S.

The Trump administration should remain focused on the key problem at hand—Assad’s chemical weapons threat—and not seek to expand the military mission to include regime change.

That kind of mission creep would bog down U.S. military forces in Syria for years, fighting not only the Assad regime, but Hezbollah, Iran, and possibly Russia.

Regime change is a bridge too far. Once crossing it, the Trump administration would inherit the responsibility to spend more blood and treasure to cobble together the shards of a failed state infested with over 1,000 fractious militias, many of them anti-American.

While Assad has lost all legitimacy as the leader of the Syrian government, his eventual removal from power should be a long-term diplomatic goal, not a military goal.

But the Trump administration can indirectly raise the military costs of Assad’s chemical aggression by providing greater aid to select Syrian rebel groups—who have no links to ISIS, al-Qaeda, and other Islamist terrorists—or to the Kurdistan Workers’ Party.

The defeat of ISIS should remain the top U.S. military priority in Syria, not regime change in Damascus. The most practical and effective humanitarian policy that Washington can provide to Syrians is to quickly destroy ISIS and relentlessly deter future chemical attacks by the Assad regime.