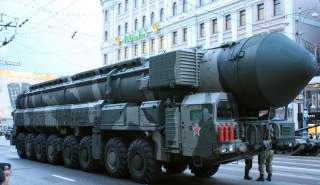 Australians need to face reality. There’s no viable defence against ICBMs fitted with nuclear warheads. If North Korea develops this technology it will have the capability to devastate cities in South Korea, Japan, Australia, the United States and other parts of the globe. A nuclear first strike by Pyongyang would have devastating consequences.

Let’s look at missile defense as an option. There’s been much talk of THAAD and Aegis. These are very advanced capable systems but they can’t protect against a determined ICBM strike. These systems are designed for theater defense to protect against shorter-range ballistic missiles than ICBMs. The US currently does have an ICBM defence called the Ground-based Midcourse Defense (GMD) based in Alaska and California but this has proven to be largely inadequate to protect US cities from an ICBM strike. A total of 17 trials conducted since 1999 resulted in only 9 successful intercepts. One wouldn’t be placing much hope in this system if a single ICBM were to be launched against New York or Washington, let alone a number of ICBMs.

The threat of assured destruction or mutual assured destruction has traditionally helped prevent nuclear powers from launching a first strike. Great powers possessing ICBM capability such as Russia, China and the US, have generally acted responsibly and rationally knowing there is more to lose from launching a first strike than there is to gain. Nuclear strategy throughout much of the nuclear age has been about maintaining deterrence. The concept has worked. The problem with applying nuclear deterrence theory to a rogue state such as North Korea is that it is openly threatening to devastate the US in a nuclear strike while developing the means to initiate that attack. It is acting neither responsibly nor rationally so relying on deterrence is a big gamble.

The age old concept, ‘the best defense is a good offence’ is relevant in this situation. If diplomacy and sanctions fail, the US and its allies, including Australia, will have little choice but to use military action to eliminate the threat. We now live in an age where the bipolar stability of the Cold War has given way to regimes increasingly capable of developing offensive nuclear arsenals which could potentially reach cross the world.

It’s important that Australia continues to work closely with the US and other allies to combat nuclear proliferation and missile proliferation. The building of Air Warfare Destroyers with Aegis capability is a step in the right direction to combat the growing number of short to medium range ballistic missiles being developed. But the limitations of this technology must be recognized by policy makers and defense commentators. The Aegis system will protect our ships and provide a defense umbrella for the forward deployment of our military but it won’t protect our cities from a determined strike.

To placate rogue nations and allow them to develop the technology necessary to launch a nuclear warhead fitted to an ICBM is the height of irresponsibility. If one wishes to debate the ethical considerations of a preemptive strike it should be sobering to acknowledge that defense against this threat, once it is carried out, is futile. This comes down to capabilities and intentions. North Korea is developing the capability to destroy our cities and through its direct threats it’s clearly signaling its intentions.

This is not to advocate the launching of a pre-emptive strike before other options such as diplomatic pressure and economic sanctions are exhausted, nor to ignore the fact that North Korea can potentially devastate South Korea and Japan if this risk is not mitigated. But the talk of spending billions on a ballistic missile shield capable of protecting our cities from a nuclear ICBM strike is unrealistic and an example of false hope.

Deterrence and missile shields are both reactive and defensive options. One is a gamble in this situation while the other simply cannot be relied upon to shoot down incoming ICBMs. The dangers inherent in a pre-emptive strike such as the level of retaliation by North Korea and the ability to locate and destroy every ICBM before Pyongyang responds, are factors that must be addressed. But if diplomacy and sanctions fail there will be no choice left but to meet these challenges head on and launch an attack.

Adam Cabot has a Masters in International Relations and is currently researching Russian nuclear strategy at La Trobe University.