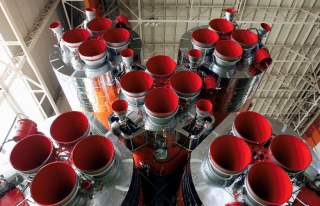 During the Cold War, the might of the Soviet Union's space program made the world tremble.

Sputnik. Yuri Gagarin. The Salyut and Mir space stations. All were a match for the world's greatest technological and industrial powers. The legacy of this robust program has lived on for years in the wake of the collapse of the Soviet Union, but problems have been steadily accumulating. Now, Russia's industrial base, economy and security are threatened by the increasingly troubled state of its space industry.

Russia's main space launch site is still the Baikonur Cosmodrome, located in the former Soviet republic of Kazakhstan. All cosmonauts and astronauts who fly to the International Space Station lift off from Baikonur, and they also land in Kazakhstan.

Leasing Baikonur is expensive as well as strategically perilous. Relations between Kazakhstan and their former Soviet partners are sometimes difficult. The deterioration of Kazakhstan's economy opens the possibility that they could raise the rent for Baikonur in the future.

So Russia is building a new launch site in southeast Russia as a replacement. The project must have Kazakh officials quietly laughing. The Vostochny Cosmodrome is well behind schedule, and some construction workers have apparently not received pay for months. Nobody knows when this project will finally be completed, but it seems certain that Russia will not be able to withdraw from Baikonur for years.

Russian rockets have been failing more frequently than they did in the past. One case was traced to sabotage. This reduces the appeal of these rockets in the highly competitive international commercial launch market.

Russia's fleet of military satellites is deteriorating, just as the global security situation is becoming more dynamic. Two post-Soviet attempts to send probes to Mars have also failed. Russia has not launched anything beyond earth orbit since the fall of the USSR.

Russia remains a critical partner in the International Space Station, and will remain so until 2024. After that, the future of the Station and Russia's own space plans are uncertain. What does seem clear is that the glory of the sixties has long faded, and it will probably take at least a decade for Russia to restore its space program to full health.