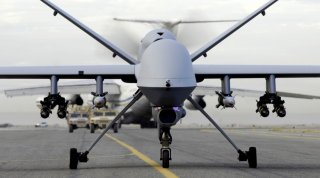 Yesterday, President Obama was asked a revealing question at the end of an appearance at the University of Chicago defending the nomination of Judge Merrick Garland to the Supreme Court.  A student inquired about the president’s unilateral authority to authorize drone strikes outside of traditional battlefields, asking specifically:  “How are these killings morally and legally justified, and what kind of message does this drone program send about American values to the world, the American people, and to law students like myself who refuse to put trust in an opaque process.”

Naturally, Obama did not respond directly to the student’s question, but this twelve minute video segment (starting at 1:10:42) is worth reviewing in its entirety, as it is Obama’s longest unscripted reflection of the drone strikes that have come to define his approach to counterterrorism.

The most remarkable detail that Obama admitted to was the following:

“It’s fair to say that, in the first couple of years of my presidency, the architecture—legal architecture, administrative architecture, command structures—around how these were utilized was underdeveloped relative to how fast the technology was moving….The decisionmaking was, was not ad-hoc, but it was embedded in decisions that are made all the time about you know a commander leading a military operation, or an intelligence team trying to take out a terrorist. And there wasn’t enough of an overarching structure.”

“We have to create an architecture for this, because the potential for abuse, given the remoteness of these weapons and their lethality. We’ve got to come up with a structure that governs how we’re approaching them. And that’s what we’ve done. So I put forward a presidential directive, that’s basically a set of administrative guidelines whereby these weapons are being used.”

An unclassified version of this Presidential Policy Directive was released on May 23, 2013.

This means that for four years, four months, and three days, Obama authorized drone strikes based on what he believed were poorly developed structures and decision making processes. That military and intelligence officials were applying to unmanned platforms the doctrine and principles that they applied to all other weapons platforms, which ignores the wholly unique capabilities that drones provide, which makes their use far more likely. This also suggests that the final authority was further down the chain-of-command than the White House was selectively claiming with their “kill-list.”

Obama’s acknowledgement yesterday echoes the CIA’s response to the Senate Select Committee on Intelligence (SSCI) study on the CIA’s detention and interrogation program. The SSCI’s Conclusion 10 found that, “CIA never conducted its own comprehensive analysis of the effectiveness of the CIA’s enhanced interrogation techniques.” Writing a response that was dated June 27, 2013, the CIA declared: “We agree with Conclusion 10 in full. It underpins the most important lesson that we have drawn from The Study: CIA needs to develop the structure, expertise, and methodologies required to more objectively and systematically evaluate the effectiveness of our covert actions.” Just as Obama was permitting drone strikes without the structure in place to support them, the CIA was detaining and torturing people without the processes to even understand whether their actions were necessary or effective.

But more consequentially, during the time frame between January 20, 2009 and May 23, 2013, the United States conducted 377 drone strikes in non-battlefield setting, which killed 2,741 individuals, 334 of whom are believed to be civilians. How can the White House today stand behind those operations and the deceased victims when Obama admits that there were inadequate processes in place? This is yet another reason why there must be a systematic retroactive assessment of U.S. counterterrorism strikes in non-battlefield settings, resembling the SSCI study that examined only the detention and interrogation of terrorist suspects. If those 119 detainees deserved such a study, why wouldn’t the 2,741 drone strike victims deserve the same?

Obama also added: “I don’t want our intelligence agencies being a paramilitary organization, that’s not their function. As much as possible this should be done through our Defense Department so that we can report, ‘here’s what we did, here’s why we did it, here’s our assessment of what happened.’ And so slowly we are pushing in that direction.” It is impossible to believe Obama is unaware of how deeply immersed CIA analysts and operatives have been at finding and killing terror suspects, or of the seamless blending of Title 50 (covert) and Title 10 (national defense) government entities at the operational level. But, if he really wanted the CIA to get out of the drone strike business—which many have proposed for years—he could have assured that it happened five years ago. Moreover, the level of detail that he claims will be reported would be a positive push toward authentic transparency or accountability, but it similarly begs the question of why he chose to wait until just months before leaving office to undertake these drone strike reforms.

This piece first appeared on the CFR website here.