5 Reasons A President Trump Might Not Increase Defense Spending 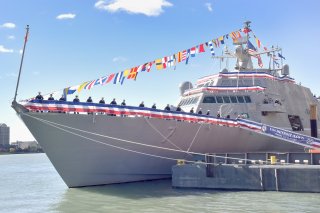 Donald Trump is so forceful in his public presence and pronouncements that many observers simply assume he would be a decisive commander in chief.  However, being decisive isn't the same thing as being a big backer of military spending.  While Trump's campaign rhetoric reveals him to be a strident nationalist, he is no militarist.

That's an important distinction, because as president Trump would inherit a fiscal 2018 defense request that is tens of billions of dollars out of balance with spending caps mandated by Congress.  Trump would have to decide early in his tenure whether to try filling that hole or force the military to live within the limits set by lawmakers.  If he took the latter course, it would have a devastating impact on the military's ability to maintain its edge in technology and training.

What Trump has said to date on the campaign trail about military spending is ambiguous at best.  Here are five reasons why as chief executive he might elect to slash military outlays rather than fully fund the Obama Administration's last defense request.

Trump's domestic plans are hugely expensive.  As a candidate, Mr. Trump has repeatedly pledged to protect Social Security and Medicare while cutting tax rates for companies and the middle class.  Social Security and Medicare are the biggest drivers of federal deficits -- their cost is expected to grow by 70-80% over the next ten years. According to the nonpartisan Tax Foundation, Trump's tax proposals could reduce federal receipts by $12 trillion during the same period.  And then there is Trump's commitment to invest in infrastructure.  Obviously, something has to give here, and defense is an obvious candidate because it is discretionary spending requiring annual appropriations, unlike formula-driven entitlements.

Trump thinks allies should be defending themselves.  Donald Trump is the first presidential nominee of a major political party to question whether the U.S. should remain in NATO.  To quote one of his many comments on the subject, "We are getting ripped off by every country in NATO, where they pay virtually nothing, most of them."  He has said similar things about Japan and South Korea, arguing that times have changed and the U.S. can no longer afford to maintain its extensive web of overseas military commitments.  If as president he followed through on his calls for a pullback from global commitments, that presumably would result in greatly reduced costs for sustaining what remained of the U.S. military posture.

Trump doesn't view Putin as an enemy.  In statements dating back many years before his presidential run, Mr. Trump has consistently praised Russian leader Vladimir Putin.  His views on Putin's positive qualities do not appear to have changed with the Russian invasion of Crimea.  Quite the opposite: he has dismissed Ukraine as a "European problem," commended Putin on his leadership qualities, and said on July 28 "there's nothing I can think of that I'd rather do than have Russia friendly, as opposed to the way they are right now."  Putin has returned the compliments.  If Trump doesn't view Putin's Russia as a rival and thinks Ukraine is outside America's sphere of interest, that implies less spending on countering Moscow's military moves.

Trump thinks the Pentagon is awash in waste.  Donald Trump was one of the few GOP primary candidates who did not endorse big increases in military spending.  He told NBC's Meet the Press "I'm going to build a military that's going to be much stronger than it is right now," however he then went on to say "But you know what?  We can do it for a lot less."  In other words, Trump thinks the Pentagon is wasting so much money that the U.S. can modernize its weapons with less money if it is better managed.  This is a popular view on both ends of the political spectrum, with many Tea Party legislators believing budget caps are a good way of getting the Pentagon to be more efficient.  So Trump's pledge to rebuild the military doesn't mean more money.

Trump's ISIS concerns will wane.  Mr. Trump has stated that he will move quickly to defeat the Islamic State, which he says didn't exist when President Obama took office and now is in 32 countries.  However, ISIS is faring poorly on the battlefield and by the time inauguration day rolls around, its fledgling caliphate may be history.  Without control of territory that can act as a magnet for aspiring jihadists, the Islamic State may collapse before the new president has filled out a cabinet.  U.S. counter-terror operations in the region will continue because the underlying causes of militancy persist, but chances are ISIS will be less of a concern to the next administration than it has been to the Obama team.

Obviously, running for president is a learning experience, and that applies even more to holding the job.  If he actually wins the White House, Donald Trump will discover that many of his preconceptions about America's military and the threats it faces need to be rethought.  For instance, America's Army is in danger of being overwhelmed on future battlefields due to decades of under-investment in new technology.  Mr. Trump doesn't know that today, but he soon will if he is elected.  Nonetheless, given all the other initiatives he has planned and the views he harbors about allies and enemies, increasing the defense budget does not look like it would be an urgent priority for a Trump Administration.