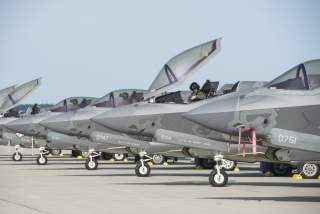 With the Fall fashion season in high gear, five of Washington's best-known think tanks have revealed their views on what's in and what's out in modern warfighting.  Although we tend to associate fashion with the frivolous, in fact styles come and go in every field, including the defense business.  For instance, during the Eisenhower years the latest thing in warfighting was to equip military units at all levels with nuclear weapons.  Today, that "New Look" is very much out of style, but the smart set in military studies is gravitating toward Silicon Valley-inspired ideas such as robotics and artificial intelligence.

The Center for Strategic and Budgetary Assessments in effect made this Fashion Week in the military think-tank world by releasing on Monday the recommendations of five organizations that were asked to propose alternative defense postures for the U.S.  The organizations, all prominent in commenting on security matters, ranged from the hawkish American Enterprise Institute to the dovish Cato Institute.  The other three organizations all have the word "center" in their names, which is appropriate since each typically espouses centrist views on defense priorities suitable for attracting bipartisan support.

So let's take a look at what's new and exciting on the fashion runway of military ideas -- and what's not.  One formerly stylish idea that is very much out of fashion this year is national missile defense, meaning protection of the U.S. homeland against ballistic-missile attack.  That idea was the centerpiece of U.S. military research in the Reagan era, but this year not one of the think tanks has proposed major new investment in active defenses against the sole existential threat to America.  Analysts from the Center for a New American Security proposed a modest expansion of the very limited defensive network built on the U.S. West Coast to counter North Korea, but otherwise active defense of the homeland is apparently passé.

The think tanks are more favorably disposed to so-called theater defenses of allies and U.S. forces deployed abroad, and with the exception of the isolationist Cato Institute they back modernization of all three legs of the Cold War nuclear triad.  Cato may have misunderstood the assignment, because it seems to have assembled a defense posture for Canada rather than the U.S.  It wants to cancel every modernization initiative in the nuclear arena except one, and to delay that one.  That makes it a distinct outlier in the defense fashion world, where everybody else seems to subscribe to offensively-based deterrence.

The fashion establishment in defense remains very much enamored with air power, especially if it is unmanned, has long reach, and incorporates stealth technology for survivability.  However, there is division among designers with regard to how tactical (short range) combat aircraft should be treated, with surprisingly strong support in the three centrist think tanks for legacy fighters that probably won't be able to survive in future wars against well-equipped adversaries.  All of the think tanks except Cato want to buy the tri-service F-35 fighter, a stealthy strike aircraft, but there are nuances in their positions that suggest the program doesn't captivate the defense fashion world the way drones and stealthy bombers do.

Drones -- unmanned aircraft -- remain the most favored accessory of modern militaries.  All of the think tanks seem to like them, whether for surveillance or strike missions, and the enthusiasm extends even to drones that lack the stealth essential to survival in contested air space.  Drones have been in the avant garde of the defense fashion world for some time now, although their utility in major conflicts remains untested.  They are well-suited to casual-wear conflicts such as the fight against ISIS, but it is highly doubtful they would hold up in the formal-wear wars that pit U.S. forces against near-peer adversaries.

The preference of defense fashionistas for unmanned systems, long reach and stealth extends into the realm of sea power.  Everybody but Cato wants to spend more on nuclear-powered attack submarines that can survive close to hostile shores.  In fact, buying more Virginia-class subs with an increased cruise-missile capability for attacking land targets was the second-most popular add proposed by the think tanks -- sandwiched between stealthy drones for aircraft carriers and accelerated purchase of a stealthy, next-generation bomber.

But once you get beyond undersea systems, manned or unmanned, the enthusiasm for sea power among defense trend-setters begins to break down.  The American Enterprise Institute is the only think tank that wants to add money for large surface combatants or amphibious ships, and even it doesn't propose to spend more money on aircraft carriers.  Aircraft carriers stand out as the least favored form of sea power, with three of the five think tanks proposing cuts to the carrier fleet.  Representatives from the Center for a New American Security -- the farm team for any Clinton Pentagon -- shockingly propose to cancel production of both aircraft carriers and the amphibious assault vessels that host Marine aircraft.

That idea is hard to square with the fact that both types of warship have been in heavy demand from regional combatant commanders since 9-11 -- so much so that the sea services have had to stretch deployments to keep up.  But hey, we're talking about fashion here, not the real world.  And when it comes to fashion, nobody, but nobody, is more out of style than the U.S. Army.  All of the think tanks except Cato recognize the need to bolster U.S. ground-force presence in Europe, but none of them seems to grasp how starved the Army is for modernization money.  Four out of five think tanks propose giving the Air Force and Navy more additional money than the Army, even though the Army is dreadfully unprepared for war in Europe.

Other than unmanned and/or stealthy combat systems, the items that are really in this year are shiny products of the Silicon Valley sensibility that seem to offer a way of leaping ahead of adversaries without spending much money.  Those include high-power microwaves, electromagnetic railguns, robotic logistics, cyber weapons, "disaggregated" space constellations, and the like.  These items are certainly worthy of research, but like many expressions of fashion trends their ultimate utility is unproven.  So while Fashion Week in the defense world provided a useful opportunity to compare the priorities of major think tanks, it probably isn't going to have much impact on how real warfighters go about preparing for combat.