Forget About Too Big To Fail, America's Military Has Become Too Small To Succeed 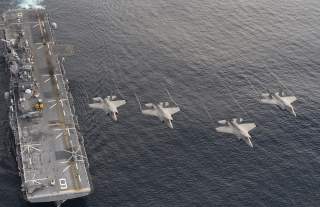 Once upon a time, the U.S. had a large military that was technologically superior to its adversaries in many, even most, areas. Today, the U.S. military is a pale shadow of its former self.

In 2016, the active component of the U.S. Army of 479,000 soldiers shrank to the smallest it has been since before World War II, when it had some 269,000. The number of Army combat brigades is scheduled to decline to 30 by 2018, one third fewer than there were just in 2013. The U.S. Navy, with 273 ships, is about the same size as it was prior to America’s entry into World War I. At approximately 5,000 total aircraft, the U.S. Air Force is both the smallest and oldest it has been since its inception in 1947. The number of active duty squadrons in the Air Force is slated to decline to 39, less than half of the 70 that were available during Operation Desert Storm. Army, Navy and Air Force end strengths are each about 40 percent smaller than they were at the end of the Cold War. This is one of the main reasons why the Pentagon had to rely on more than a hundred thousand private contractors to provide the necessary logistics, sustainment and communications for its deployed forces when it went to war in Iraq and Afghanistan.

At the height of the Cold War, the U.S. maintained a two-and-a-half-war strategy: major, simultaneous wars against the Soviet Union and China plus another nation. The Nixon Administration changed the sizing criteria to one-and-a-half-wars: a major war with the Soviet Union plus a second, possibly related, conflict in the Persian Gulf or on the Korean peninsula. Following the collapse of the Soviet Union and the end of the Cold War, the political system concluded that war between major powers was virtually impossible.

In truth, the U.S. military never had sufficient capacity to conduct two near-simultaneous MRCs. The dirty little secret among Pentagon planners is that the conflicts would have to be sequenced, possibly by six months or more, in order to allow critical assets to be redeployed from the first to the second contingency. Even the fight against Islamic terrorism strained the military’s capacity in some ways. The Army had to add nearly 75,000 active duty personnel and mobilize a large fraction of the National Guard just to handle the ongoing demands of Iraq, Afghanistan and its other worldwide commitments. A special acquisition program, directed by then-Secretary of Defense Robert Gates, had to be undertaken to acquire sufficient drones and Mine-Resistant Ambush Protected vehicles.

Since the end of the Cold War, reductions in the size of the military and its combat capacity was justified, first, on the basis of the diminution of the threat and, second, by reference to our technological edge over prospective adversaries and the resulting improved combat capability of the new systems that were being deployed. Neither of these arguments any longer holds true. The demand for U.S. military forces continues to grow even as their overall capacity declines. The civilian and military leadership of the Department of Defense (DoD) have publicly declared that the U.S. now faces five strategic threats: Russia, China, North Korea, Iran and global Islamic terrorism. Conflict with either of the first two would constitute a major war, not a regional contingency. U.S. Air Force Chief of Staff General David Goldfein testified before Congress that his service only had enough combat ready forces for one MRC and even that would require denuding all other theaters.

Moreover, the U.S. military has just about run out the string on its vaunted technological superiority. We have been repeatedly warned by senior Pentagon and Intelligence Community officials that the U.S. military is losing its technological edge. Both Russia and China have invested heavily in so-called anti-access and area denial capabilities (A2/AD) that are designed to counter erstwhile U.S. advantages, particularly in air and naval power. Russia is deploying its A2/AD capabilities in ways that could preclude U.S. and NATO military operations in the Baltic, Black and eastern Mediterranean Seas. These two countries are also developing advanced power projection forces and forward bases that could deny the U.S. the ability to operate in the eastern Pacific and the Arctic. Secretary of Defense Ashton Carter found the loss of U.S. technological superiority so threatening that he had to formulate a new investment strategy, the so-called Third Offset, specifically designed to re-establish our advantage in military capabilities.

Even regional adversaries and terrorist organizations are deploying advanced military capabilities. North Korea, a nuclear weapons state, has already deployed over a thousand ballistic missiles -- three hundred of which have the range to strike Japan and U.S. bases in the Western Pacific. Iran has ballistic missiles that can reach most of the Middle East. Tehran just received its first Russian S-300 air defense system. Hezbollah, the Shiite terrorist group, is reported to have an arsenal with tens of thousands of rockets and ballistic missiles. ISIS has employed Russian-made anti-tank guided missiles capable of destroying U.S.-made M-1 tanks operated by the Iraqi Army.

This is why many in the military shiver in their boots when they consider going up against a serious A2/AD threat. It has become such a problem that the Chief of Naval Operations, Admiral John M. Richardson, has banned the use of the term A2/AD because, in his words, it implies “that any military force that enters the red area faces certain defeat - it’s a ‘no-go’ zone!” Yes, the U.S. military can penetrate current A2/AD defenses, but at what price? Let’s remember that the Air Force only has 186 F-22s, the plane that was designed to penetrate advanced air defenses, and there are no more where those came from.

The U.S. Army faces similar difficulties. As the commander of all U.S. Army forces in Europe, Lieutenant General Ben Hodges, recently declared his job is to make 30,000 soldiers look like 300,000. Currently, the Army and its NATO allies lack enough forces in Europe to oppose a determined Russian offensive. In addition, neither the U.S. nor its allies have real answers to the kind of capabilities in electronic warfare, cyber offense, high volume, long range fires and tactical air defense that Russia has demonstrated in its operations in Ukraine.

The reality is that the U.S. military today is too small, with too few technological advantages and facing too many threats. There is now a very real possibility that in a future conflict, even one with a regional adversary, U.S. forces could suffer such high casualties that, regardless of the outcome, this country will lack the capabilities needed to deal with any other major contingency. During the 1972 Linebacker II bombing raids against North Vietnam, the Air Force lost some 20 B-52s. Back then, this was a small fraction of the overall fleet. Today that would be more than 10 percent; the bomber force would literally be decimated. A force that is too small to fail is one that the U.S. increasingly could be reluctant to send in harm’s way save when national survival is at risk.