Forget North Korea: The Real War Threat In Asia is over Taiwan 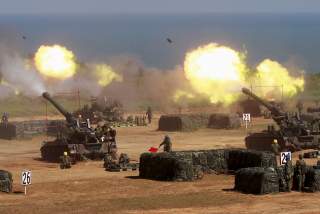 Chinese President Xi Jinping, in a highly-charged speech before the National People’s Congress, warned that Beijing was ready to fight its enemies in a “bloody battle” to regain its past glory and preserve its empire. Subsequently, an editorial in the Global Times, a state-owned but unofficial outlet for ideas that Beijing wishes to float for reaction, said China must prepare for a “direct military clash in the Taiwan Straits”. These are not just words.

In fact, Taiwan is indeed beginning to openly discuss full independence. It is noteworthy that Xi has stated that resolution of the issue of Taiwan cannot be left to the future.

In recent weeks, Beijing sailed its aircraft carrier and associated support vessels through the Taiwan Strait, conducting live-fire exercises, and flew its bombers and fightersaround the island nation at least twice last month.

This is not the first display of force by China in the area and China has not hesitated to engage in actual hostilities with regard to Taiwan.

China has always hungered to rein in the renegades on Taiwan, claiming the island is nothing more than a wayward province of the mainland. Also, those recent threats and shows of force by Beijing for the benefit of Taipei were not without precedent. There have been three series of clashes between China and Taiwan in the not-so-distance past.

The first occurred between September 1954 and May 1955 when China took over the Yijiangshan Islands and forced Taiwan to evacuate the Tachen Islands. Both island groups are in the East China Sea just off the coast of Taizhou on the mainland. American news media fixated on the artillery duels that took place between Taiwanese forces on the islands of Quemoy and Matsu and the Chinese army on the mainland.

A third set of engagements followed from July 1995 through March 1996 when China conducted missiles tests, initially near Pengjia Islet not far off the north coast of Taiwan. Following that, another series of missiles tests landed projectiles inside Taiwan’s territorial waters within 45 to 65 kilometers off Keelung and Kaoshiung ports, the two being on opposite ends of Taiwan.

Commercial airline flights and shipping were disrupted by these events as Taiwan was effectively bracketed by the missiles.

The US stirs the pot

Soon after being elected – but before assuming office – US President Donald Trump accepted a congratulatory telephone call from Taiwan President Tsai Eng-wen. Perhaps this was out of ignorance of the formal US policy of not communicating directly with Taipei or maybe it was a portent of Trump’s upcoming change in policy regarding China. Either way, Beijing was displeased.

In March this year, the US Congress unanimously passed and Trump signed the Taiwan Travel Act, designed to give moral and political support to Taipei by encouraging US officials to make recognized visits to the country.

In addition to the perhaps somewhat muted mutterings in Taipei, there were discussions in at least one Washington think tank about abandoning the “One China” policy. Understandably, this has Beijing all the more upset – to the point of threatening Taipei with overflights of its territory.

So, in view of the threat by China to conduct overflights of Taiwan, is that merely talk? Well, there are those three Taiwan Strait incidents that establish the precedent for military action. Regardless of whether the odds of such an event happening are low or high, both Taipei and Washington must be prepared.

The question becomes one of how to respond. Even if China makes only an aerial bluff by running bombers and fighters at the island but turning away at the last minute, such a challenge cannot go unanswered. Verbal or diplomatic protest are not effective in rebuffing such actions – and Taiwan along with its allies would be seen as impotent, thus encouraging more such incursions.

But diverting hostile aircraft away from a planned flight path is not easily done. Certainly, Taiwanese fighters can intercept the intruders and signal for them to turn away, but that might not be successful. And if the Chinese aircraft do intrude into Taiwan’s airspace, what then?

Given the narrowness of the Taiwan Strait – 130 to 220kms – and the range of modern weaponry, Chinese airplanes would be vulnerable not long after reaching the midpoint between the two nations. An incursion into Taiwanese airspace – let alone an actual overflight – would create a major international incident. That says nothing about what could transpire should a Chinese airplane be shot up – or even shot down.

The US added more fuel to the fire by flying two B-52 long-range nuclear-capable bombers within 250 kilometers of Guangdong on the mainland to the west of Taiwan late last month. This is in addition to the Freedom of Navigation (FON) operations conducted by US warships in the South China Sea, not too distant from Taiwan.

Events in the airspace and seas around Taipei are certain to heat up this year, and while it is clear that bullies understand and respect only force, what is not known is how things will play out. Taiwanese independence and Xi Jinping’s face are at stake.