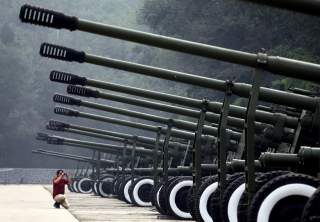 Image: A visitor to the China Aviation Museum, located on the outskirts of Beijing, takes a photograph of a row of old anti-aircraft guns on display in this August 17, 2010 file photo. China has become the world's fifth-largest arms exporter, a respected Sweden-based think tank said on March 18, 2013 its highest ranking since the Cold War, with Pakistan the main recipient. REUTERS/David Gray/Files.