A Four-Point Plan for Reviving the U.S. Role in Asia 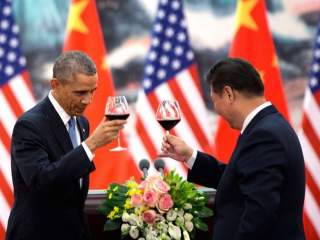 If at first the Obama administration fumbled its announcement in 2011 that the United States was “pivoting” to Asia, the “rebalance” to Asia, as it was rebranded, has been a central pillar of the Obama administration’s foreign policy, and its merits are arguably beyond dispute. The Asia-Pacific region accounts for roughly one third of global trade, more than half the world’s population and will continue to be the locus of the world’s attention in the twenty-first century.

The next administration, whether Republican or Democrat, would do well to build on President Obama’s rebalance policy, rather than toss out the entire tool kit. However, the next president will almost certainly seek to define his or her foreign policy with a fresh start by launching new initiatives and distancing their rhetoric from that of the Obama administration.

Build from the TPP

The Trans-Pacific Partnership trade deal is an unprecedented and expansive agreement, bridging the United States and Japan, the largest and third largest economies in the world, respectively, as well as three Southeast Asian nations, Vietnam, Singapore and Brunei. The deal also includes Australia, Canada, Chile, New Zealand and Peru. Both Indonesia and the Philippines have also signaled strong interest in the TPP, to which Singapore is a signatory negotiating member, and will continue to be strategic partners, economically and otherwise. The next administration should embrace the TPP in order to anchor the United States in the Asian region and to cement the norms of free trade cherished by the United States.

While nearly all of the candidates have rejected the TPP as it currently stands, it seems that their positions stem more from domestic political concern—however misguided (polls have shown that far more Americans support the passage of TPP than oppose it)—rather than sound trade policy. Ratifying the TPP will bring modest but measurable economic benefits to Americans, and it will entrench the U.S. in Asia at this critical point in time.

Second, an area of importance the Obama administration has neglected in favor of enhancing bilateral multilateral relations with autocratic nations such as Malaysia and Brunei, is human rights. The next U.S. president should double down on the rebalance but inject American values of civil society and freedom of expression by emphasizing human rights in its outreach to repressive leaders in the region.

The United States should collaborate with regional partners continues against terrorism. In January, the bombing and shootout in Jarkarta, Indonesia, that was attributed to the Islamic State (IS), signals a worrisome new attempt by IS to lay down roots in Southeast Asia by liaising with local terrorist cells such as Jemaah Islamiyah (JI) in Indonesia and Islamic resistance groups in Southern Thailand and the Philippines. Regional powers such as Indonesia and Singapore, and our ally the Philippines, whose Supreme Court just approved an Enhanced Defense Cooperation Agreement (EDCA) with the United States, are important partners in the effort to combat terrorism in Asia. The Philippines, in particular, permitting the rotation of U.S. troops on its bases, will be vital to American interests in the region.

Manila has also mounted a serious legal case against Beijing’s territorial claims in the South China Sea, bringing the most credible and potentially decisive arbitration on China’s efforts to construct and militarize a number of islands to the International Court of Justice at The Hague. The ICJ is expected to make its ruling in the first half of this year—the decision could set the stage for either diffusion of escalation of conflict in contested waters.

Singapore, for its part, boasts the state-of-the-art Information Fusion Center at Changi Naval Base, which collates information sharing among thirty-five countries and enhances maritime domain awareness in the region, making it a crucial partner for American intelligence collection in important areas such as piracy, terrorism, and maritime security in Asia. Indonesia, a progressive democracy with a good track record combating terrorism, has proven that moderate Islam is the best weapon against violent extremism.

Downplay the Current Mindset of Rivalry

The great challenge of the century for future American leaders will be accounting for China’s rise. In the immediate term, the next president should focus on two measures which can downplay the current mindset of rivalry between Washington and Beijing. The next administration should learn from the Obama administration’s strategic mishandling of China’s announced Asian Infrastructure Investment Bank (AIIB). When Beijing announced its new regional economic initiative, Washington voiced strong opposition and wasted serious political capital by leaning hard on allies and partners to not join the AIIB. Despite its vociferous resistance, Australia, the United Kingdom, Germany, and France, all joined China’s infrastructure bank. Only Japan held off, citing concerns with transparency and governance, before announcing its own $110 billion funding for regional infrastructure via the Asian Development Bank.

As part of reducing the sense of rivalry, Washington and Beijing must also take steps to mitigate the chances for strategic mistrust and conflict. James Steinberg and Michael E. O’Hanlon in their book, Strategic Reassurance and Resolve: U.S.-China Relations in the Twenty-First Century, provide a compelling case for enhanced cooperation between the two sides, even amidst escalating competition. Yet, strategic rivalry need not breed armed conflict.

The region holds the potential for both explosive economic growth as well as great power conflict, as the United States and Japan, two of the three largest economies in the world, attempt to accommodate China’s rise within the liberal international order of free market democracy that has largely set global norms since World War II.

The contradiction is that China is neither liberal nor democratic; nor, as the world’s fastest growing economic power for several decades, does it embrace free market standards espoused by the West. The stark differences of Chinese social values and conceptions of governance have created great uncertainties for other countries, who find themselves wrestling with the question: is China a revisionist power seeking to rewrite the rules of the game, or will China attempt to fit into the world order that has enabled its rise thus far?

The next American president would do well to corral a strong foreign policy team with Asia expertise and to give the above questions some serious consideration. The ability of both parties’ candidates to articulate a credible Asia policy to the American public will win votes, and it will also determine U.S. standing in the world in the Asian century.

Hunter Marston is a Southeast Asia analyst at a Washington, D.C., think tank. He focuses on U.S. foreign policy, and the politics of Vietnam, Myanmar, and Thailand specifically. Follow him on Twitter at @hmarston4.