France Is Building a New Nuclear Powered Submarine. Here Is What It Can Do. 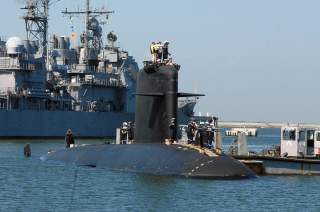 Following a May 2 ministerial investment meeting presided over by Armed Forces Minister Florence Parly, Paris announced that it was purchasing a fifth Barracuda nuclear attack submarine, Defense News reported. The decision came after the French Navy Chief of Staff Adm. Christophe Prazuck told parliament last October that he expected the fifth submarine to be ordered sometime in 2018.

In addition, the draft 2019–2025 military budget plan that was released in February 2018 included funding for six Barracuda submarines. The six submarines in the class are expected to be named Suffren, Duguay-Trouin, Tourville, Dupetit-Thouars, Duquesne and De Grasse. The lead boat of the class, Suffren, is scheduled to be delivered to the French Navy sometime in 2020, three years after it was initially slated to be ready.

Work on the Barracuda-class began all the way back in 1998, according to Global Security, a defense information website. The design phase of production began four years later in June 2002. In late 2006, the French Defense Ministry awarded the state-owned defense firm DCN (which was later renamed DCNS and is now called Naval Group) a 7.9 billion euro ($9.3 billion under current exchange rates) contract to build the submarines. The company Areva was given responsibility for the nuclear components of the submarines. The reactor is expected to be derived from the one France’s Navy uses on its Charles de Gaulle aircraft carrier. Unlike most naval reactors, France’s do not use highly-enriched uranium because the navy purchases the fuel from the commercial market.

The Barracuda vessels will also have the same SYCOBS combat management system as was used in Le Terrible, the last ship of the Le Triomphant-class nuclear ballistic-missile submarines (SSBN). According to the website Naval Technology: “The combat system integrates active and passive sensors, electronic, optronic and optical sensors and data processing, signal processing of downloaded external tactical data, the launch and control of torpedoes, missiles and countermeasures, external communications and navigation. The communications suite includes satellite and extra-long-frequency acoustic links.”

When completed, the Barracuda-class SSNs are expected to replace France’s existing force of four Rubis submarines as well as the two newer Amethyste-class submarines. The new subs are expected to displace around 5,300 tons when submerged, which is roughly twice as much as the Rubis submarines. Despite being much larger than their predecessors, the former program manager for the Barracuda has said that the newer submarines only require sixty sailors, ten less than France’s older vessels. The newer subs will also have a length of 99.5 meters, a beam around 8.8 meters, and a diving depth of around 350 meters. They will also be able to cruise at speeds approaching twenty-five knots while submerged.

As far as weaponry, the submarines will have four 533mm torpedo tubes and eighteen to twenty additional torpedo or missile tubes, with armaments depending on mission. The former program manager also said that the submarines can be equipped with the “F21 Torpedo, Exocet SM39 Block 2 Mod 2 Anti-ship missile, MdCN (naval cruise missile), [and] FG29 mines.” He also said the new submarines “constitute a revolution or several revolutions in the submarine forces,” rather than merely an evolution. By this he appeared to mean the level of automation of the Barracudas, which help reduce the staff size.

Still, the new submarines will also bring two new types of capabilities as far as France is concerned. First it will have a land-attack capability in the form of a sea-launched missile being developed based on the air-launched cruise missile that Paris calls the Scalp EP and Britain refers to as the Storm Shadow. According to Naval Technology: “The missile has long-range precision attack capability against targets at ranges up to 1,000 km. Scalp has inertial guidance which is continuously updated in flight with digital terrain matching and GPS (global positioning system). An imaging infrared seeker and automatic target recognition provide terminal guidance.” The same source notes that “the missile is being developed for both submarine torpedo-tube ejection and surface ship vertical launch.”

Despite not being in operation yet, the Barracuda has already been generating interest abroad. First, Australia selected a conventionally powered version of the submarine called the Shortfin Barracuda as the replacement for its Collins-class subs. In doing so, it beat out the much more established German Type 216 and Japanese Soryu-class subs. More recently, South Korea has been eyeing as the Barracuda as a model to follow should it decide to build nuclear-powered submarines. One advantage of the Barracuda for South Korea is that, as noted above, it will not require highly enriched uranium.

Zachary Keck is a former managing editor of the National Interest and the official foreign-policy advisor of the 06010. He tweets at @ZacharyKeck.