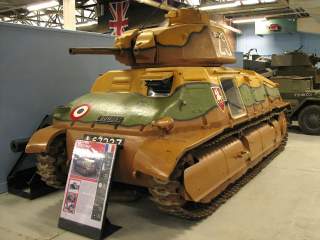 The fall of France in 1940, one of the 20th century’s most consequential disasters, wasn’t supposed to have happened. The French military was larger — on paper — and technologically superior to its German enemy.

Testifying to the French advantage is the Somua S35, a plump, cute tank which was one of the best tanks in the world in 1940. Hundreds went into action in May 1940, but to little avail.

The S35 and the heavier Char B1 were heavier armed — and armored — than equivalent German tanks, most of them light Panzer Is and IIs and augmented by a smaller number of medium Panzer III and IVs.

Saint-Ouen-based truck manufacturer Somua began developing the S35 in 1934. While the tank had its flaws, it made up for them with strength and firepower. The S35 had 47 millimeters of frontal hull armor and 40-42 millimeters of armor in its turret and sides.

A 47-millimeter cannon was its main armament. That was formidable in 1940.

Observers might also notice a slight outward resemblance to the U.S. Sherman, which in its early versions shared with the S35 a hard — but not brittle — cast hull. However, this hull design made the S35 more expensive and time-consuming to produce than welded hull tanks such as the T-34.

Still, in strict objective terms, the S35 was a fearsome tank and more than capable of taking on any comparable German tank at the time. The Panzer III had at most 30 millimeters of armor and a 37-millimeter cannon then, making it considerably hard-pressed to defeat an S35 at medium to long ranges.

To be sure, the S35 had flaws. Besides being expensive to make, the cast hull made the pudgy tank a nightmare to maintain in the field, and throwing a track could put it out of action for good … given the speed of the German tank divisions. By the time the crews could fix them up, the battle moved elsewhere.

The commander also had to operate the gun and command the tank — but the turret had no hatches, reducing visibility. To make matters worse, four out of every five S35s lacked radios. If you can’t communicate, you can’t really adapt to changing circumstances on the battlefield. If you can adapt faster than your enemy, then you win.

And that’s how the Germans overcame their physical disadvantages. The German military excelled in organization and tactics, granting field commanders more flexibility and initiative … and the Wehrmacht embraced the radio.

In May 1940, the French military was still following a defensive-oriented playbook that had hardly changed since World War I, with rigid plans and overemphasis on infantry divisions.

“All the maneuvers and large-scale exercises of which I had heard led to the conclusion that the French command wanted its troops to be trained in such a way that careful movement and planned measures for attack or for defense could be based on definite, pre-arranged circumstances,” Heinz Guderian, the German general whose tanks broke the Allied armies in France in two, wrote in his memoirs.

“This mania for planned control, in which nothing should be left to chance, led to the organization of the armored forces within the army in a form that would not destroy the general scheme, that is to say their assignment in detail to the infantry divisions.”

“Only a fraction of the French armor was organized for operational deployment.”

Which is a reminder that emerging technologies will not save your army — if you’re still stuck in the mindset of fighting the last war.

France expected its plans to survive contact with the enemy. It’s a military truism that making such an assumption is foolish … and downright reckless.