France's Charles De Gaulle Aircraft Carrier: The Good, the Bad and the Nuclear 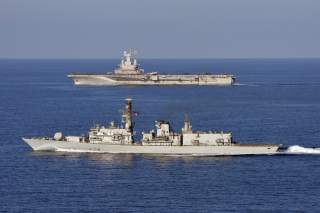 The nuclear-powered aircraft carrier Charles De Gaulle (R91) is the centerpiece of the French navy. The 42,500-ton ship is set to play a key role in Paris’ war on the Daesh terrorist network in Syria and Iraq following Friday’s deadly attack on the French capital.

Though the ship is proving to be a capable warship with its relatively powerful air wing, which consists of a maximum of forty Dassault Rafale M strike fighters, Super Étendards Modernisé strike aircraft, Northrop Grumman E-2C Hawkeyes and a host of helicopters, Charles De Gaulle has faced a difficult path to realizing its full potential. During construct, the ship ran into huge cost overruns totaling roughly eighteen percent and several major delays. In fact, work had to be stopped on four separate occasions.

But Charles De Gaulle faced difficulties even once the ship was completed. The ship had to be fitted with better radiation shielding after inspectors found higher than expected radioactivity onboard—the ship had been in construction so long that safety standards had changed. Moreover, the ship’s flight deck had to be extended by about fourteen feet to accommodate the Hawkeye. The vessel had originally been designed to launch and recover the Super Étendards Modernisé, the Rafale and the US. Navy’s F/A-18C/D—the requirement to operate the Hawkeye was only added in 1992, which necessitated the refit.

The carrier also faced tremendous problems with its propulsion system initially. The ship had issues with vibration, and indeed during one well-publicized incident, the propellers literally snapped. The problem was traced to faulty manufacturing—there were air pockets in the cast copper-aluminum alloy. Worse, the blueprints for the propellers had been lost in a fire, which meant that the ship had to be refitted with hand-me down screws from Foch and Clemenceau. That cut her speed down from twenty-seven knots to about twenty-four knots—which was unfortunate since she is already considerably slower than her predecessors which steamed at thirty-two knots.

Charles De Gaulle was eventually refitted with new propellers in 2007 during her first refueling. The Charles De Gaulle’s advantage over conventional carriers is that she doesn’t need as much logistical support compared to her predecessors due to her nuclear propulsion. However, the French opted for a reactor that needs to be refueled every seven years. By comparison, an American carrier is only refueled once during its fifty-year lifespan. The refit also added a host of improvements that allowed the French to finally exploit its full potential. But even then, Charles De Gaulle suffered another embarrassing electrical fault in the propulsion system in 2010 that cut her deployment short—literally to one day.  At this point, however, most of the bugs seem to have been ironed out.

Charles De Gaulle is not the equivalent of a Nimitz or Ford-class carrier. The ship is less than half the size and it doesn’t have the deck space to accommodate as many aircraft or launch and recover those jets at the same rate, but it is a relatively capable vessel. The flight deck is not long enough to conduct simultaneous launch and recovery operations, but at maximum capacity, it can carry forty aircraft and launch 100 sorties in a single day. But that’s at maximum capacity; in reality Charles De Gaulle doesn’t carry nearly that many planes at any one time. What she does do is give France an independent strategic power projection capability—which is Paris’ first and foremost defense policy objective.