Is Game of Thrones Secretly About Global Warming? 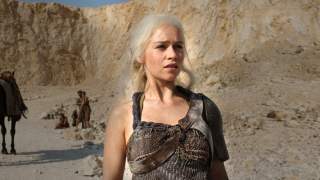 A new Vox video portrays a theory that the hit fantasy drama Game of Thrones is actually all about catastrophic manmade global warming. However, a more accurate connection is that both are simply science fiction.

In Game of Thrones, White Walkers—terrifying humanoid/zombie ice men so fearsome that they change the weather to snow and ice by their mere presence—pose an existential threat to the Seven Kingdoms.

The Vox commentary suggests that “like climate change, the White Walkers are a threat the whole human race.”

Different noble houses in the Seven Kingdoms are too busy arguing amongst themselves and even denying the existence of the threat to come to common action. As a result, the ones who suffer most are the poor and defenseless.

Similarly, Vox says, developed and developing nations have struggled to set aside political competition, sacrifice a little up front, or even recognize the existential threat of global warming. Meanwhile, the poorest of the world stand to suffer the most.

If you watch the show, you may be saying to yourself, “I can see it.” But like many fan theories, the idea fails when the facts bear out.

The Vox video claims that “climate change is this massive global threat” where manmade carbon dioxide emissions have led to skyrocketing temperatures since the Industrial Revolution and will lead to rising flood levels, more droughts, increased ocean acidification.

In fact, according to the United Nations’ latest Intergovernmental Panel on Climate Change (IPCC) report on climate science, did not find any such evidence when looking at the data.

- Temperatures. The reality is that regardless of what fraction of the observed warming is due to anthropogenic carbon dioxide, the actual temperature trends do not warrant White Walker levels of concern.

- Floods. The IPCC found evidence for increases, decreases, and no trend at all in flood activity or severity.

- Droughts. The IPCC noted that its previous conclusions about increasing trends were overstated and that “the compelling arguments both for and against a significant increase in the land area experiencing drought has hampered global assessment.”

- Ocean Acidification. The oceans are not currently acidic, nor do any projections show them likely to become acidic. Studies show that estimated changes in ocean pH levels are within the ranges experienced in the past. When it comes to ocean acidification, the ocean’s aciditycould have both positive and negative effects. According to NOAA, photosynthetic algae and seagrasses may benefit from higher CO2 levels. On the other hand, some shelled organisms, including oysters, clams, sea urchins, corals, and calcareous plankton could be at risk if a more acidic environment interferes with the calcification process

Heritage has addressed each of these and much more in greater detail with a new paper: The State of Climate Science: No Justification for Extreme Policies.

We’ve been told that by 2030 the spring season would start in January. Al Gore said the North Pole would be ice free by 2013. The United Nations predicted in 2005 that by 2010 there would be 50 million climate refugees. Others said there would be no more snow.

But are the poor suffering from the negligence of world leaders?

Vox connects those allegedly marginalized by global warming with the Game of Thrones’ Wildlings (or Free Folk), barbaric humans who live outside the Seven Kingdoms, who suffer most from ignoring the White Walkers.

The world’s poorest do face a threat, but not for the reasons Vox suggests. The reality is the world’s poor are more likely to suffer from global warming policies, not global warming itself, because they’ll be denied access to reliable energy and the better standards of living energy supports.

Seventeen percent of the world’s population does not yet have access to electricity and 35 percent don’t have clean cooking facilities.

Even if global warming does become a problem, environmental minister of India, Prakash Javadekar, frames the issues correctly: “Unless we tackle poverty, unless we eradicate poverty, we cannot really address the climate change.”

Whatever the current or next global challenge is, higher levels of wealth and access to more resources will more effectively solve it. And because the developing world is unlikely to commit to reducing greenhouse gas emissions, stringent reductions by the developed world will have little to no effect on global temperatures whether you believe global warming is the White Walker of the real world.

All of this is to say, let’s “hold the door” on pushing through with costly global warming policies that are a non-solution to an unlikely problem. We don’t know what the next great global challenge may be.

Maybe it will be manmade global warming, though the evidence as it stands doesn’t indicate so. It could be an asteroid or dangerous dictators with nuclear weapons.

Let’s hope it’s not really White Walkers unless you’ve got a stockpile of dragon glass at your house.