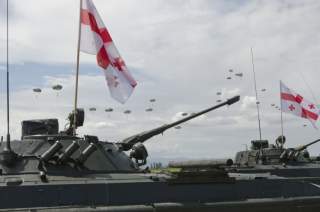 At a summit meeting in Warsaw in early July, NATO will consider how best to deter Russia. Ukraine and the Baltics will be at center stage. But Georgia deserves a signal in Warsaw that it will not be forgotten if Russia adopts a harsher policy.

Georgia’s security always seems to be precarious. In August 2008, Russian troops assaulted Georgia amid its shelling of the separatist enclave of South Ossetia. The invasion came after NATO agreed that Georgia would become a NATO member but set no timetable. The war led to the loss of Abkhazia and South Ossetia, their declaration of “independence,” and Georgia breaking diplomatic relations with Moscow. Since then the Georgian survival strategy has been to thread the needle between drawing closer to the West and maintaining the semblance of a peaceful relationship with Russia, which opposes Georgia’s Western-leaning foreign policy.

Russian pressure on Georgia is unrelenting. It has turned Abkhazia and South Ossetia into military and criminal outposts. Russian troops regularly move South Ossetian boundary fences, step by step, deeper into Georgia. An onslaught of Russian propaganda claims that the European Union and NATO will never admit Georgia, and that Russian and Georgian values are traditional, not like those in the liberal West.

Poverty and declining living standards are contributing to the declining popularity of the current government. A February-March poll by the U.S. National Democratic Institute (NDI) found that over the previous two-and-one-half years 42 percent of respondent households saw themselves as worse off, and only 10 percent better off. Parliamentary elections will be held next October and the campaign has already produced incidents of violence.

Despite their travails and the Russian “soft power” onslaught, Georgians maintain their focus on moving westward. In the NDI poll, 61 percent of respondents wanted Georgia to join the European Union, versus 20 percent who preferred the Russian-led Eurasian Economic Union. By 68 percent to 19 percent, Georgians favored joining NATO, and 47 percent saw Russia as their biggest threat compared to 2 percent for NATO. The prospect of visa-free travel to EU member states garnered 84 percent approval.

On taking power in 2012, the Georgia Dream government adopted a more flexible approach to Moscow. The idea was to resume trade, tourism, and cultural ties while holding firm on non-recognition of Abkhazia and South Ossetia. There has been some success. Trade is growing and Russian tourists are flocking to Georgia. After being banned, Georgian wine now has a large market share in Russia.

Georgia entered into an association agreement with the EU, but unlike with Ukraine, Russia acquiesced. Progress with the EU weakens the impact of opposition voices that claim the government is pro-Russian.

The foreign policy environment in the broader region has changed. China is evincing interest in Georgian transport and Black Sea port infrastructure. Iranian ties with Georgia, mainly economic, are growing as more sanctions are lifted. Georgia’s close relations with Turkey have taken on added significance given the downturn in Russian-Turkish relations. Georgia’s immediate neighbors, Armenia and Azerbaijan, briefly resumed hostilities over Nagorno-Karabakh, a powder keg that could provoke wider regional tensions and spark a refugee exodus to Georgia and elsewhere.

Given the dangerous environment and the small size and relative military weakness of Georgia, it wisely pursues a good neighbor policy in all directions. Tbilisi manages this because of democratic tolerance and strategic location.

Still, Georgia must improve its defense posture. It is purchasing an advanced anti-aircraft defense system from France, opening a NATO training center within its broders, and hoping to edge closer to NATO at the Warsaw Summit. By 2012, Georgia had become the largest non-NATO and largest per capita contributor to the International Security Assistance Force in Afghanistan.

For Georgia, the main security balancer is the United States. The late former Georgian President EduardShevardnadze said that without American support, Georgia would have lost its independence and been swallowed by Russia. Georgians know that America and its allies face major challenges elsewhere and thus Georgia cannot be atop the West’s list of concerns.

What worries Georgians is that America is retrenching and the EU is convulsed with its own problems, such as a refugee crisis, sluggish growth, and a possible British withdrawal from the EU. Georgians fear that if a more assertive Russian policy toward Georgia were to emerge, the West may not do much to help counter it.

What would help most now are signs that Georgia is not forgotten. A visit to the South Caucasus by Secretary of State John Kerry and other Western leaders in advance of the Warsaw Summit could demonstrate their continued interest and support for Georgia’s sovereignty, independence, and territorial integrity. This support from the West should be underlined at the Warsaw Summit.