German Vice Chancellor: America Is "Dropping Out As An Important Nation" Under Trump 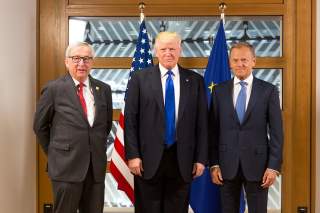 Gabriel went as far as to say the U.S. is “dropping out as an important nation.”

“That’s unfortunately a signal for a change in the world’s balance of power,” Gabriel said at a refugee conference, according to Deutsche Welle.

Trump’s dealings with Saudi Arabia, his refugee policy and stance on environmental issues are examples of issues that make the West “weaker,” according to Gabriel.

“Anyone who accelerates climate change by weakening environmental protection, who sells more weapons in conflict zones and who does not want to politically resolve religious conflicts is putting peace in Europe at risk,” Gabriel said. “The short-sighted policies of the American government stand against the interests of the European Union.”

German Chancellor Angela Merkel said Europe “must take its fate into its own hands” Sunday as the U.S. and the United Kingdom are looking after their own interests. (RELATED: Merkel Says Europe Can No Longer Rely On US, UK)

She said a division within the Western alliance became evident during the G7 meeting in Italy last weekend.

“The times in which we could completely depend on others are on the way out. I’ve experienced that in the last few days,” Merkel said at a campaign rally in Munich. “We Europeans truly have to take our fate into our own hands.”