Germany Could Arm Europe with Some Truly Super Submarines 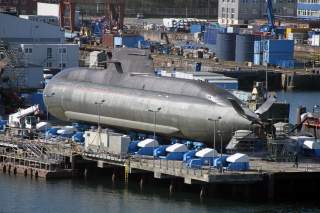 Germany’s submarine fleet has been going through a rough patch lately. By the end of 2017, all six of the Type 212A submarines, which use hydrogen PEM fuel cells for super quiet Air-Independent Propulsion (AIP), were either undergoing trials and overhauls or awaiting repairs for unexpected accidents—a process slowed to a glacial pace due to a failure to procure spare parts in advance.

Nonetheless, on the long term both German submariners and the Type 212’s manufacturer have reason for cheer. Six new model Type 212CDs (formerly the 212NG) are slated to deploy to northern Europe by the mid-2020: two more will be added to the German Navy, expanding its submarine fleet to eight boats by 2027, while four will go to Norway by around 2025 to replace its six Ula-class boats, purchased from Germany back in 1989.

Ironically, Norway is one of a handful of small European countries to have waged a modern coastal-defense war: in 1940, Norwegian and British forces sank half of Nazi Germany’s destroyer force, as well as three cruisers and six U-Boats, before being overwhelmed.

In announcing the deal in February 2017, Norway’s Defense Minister Ine Søreide mentioned that the upgrade to the Norwegian Navy was necessary to counter “increasingly unpredictable behavior” from Russia. Moscow has stepped up submarine patrols and flights by bombers and recon planes in the North and Baltic Seas since 2014, as well as heightening the threat posture of its ground forces. This coincides with deteriorating relations with Europe in the wake of Russia’s seizure of the Crimean Peninsula.

The contract for the Type 212CD will not be formally signed until 2019, but the four subs are expected to cost Norway about $1.81 billion—significantly less than the cost of a single U.S. nuclear-powered submarine.

Furthermore, up to ten more of the fifty-seven-meter-long German submarines could be ordered by Italy, the Netherlands and Poland, depending especially on the procurement decisions of the latter two nations.

At fifty-seven meters long, the Type 212A is short and chubby-looking—but in the shallow coastal waters of the Baltic Sea, that allows the submarine to negotiate tight, rocky passages and hide in rocky cavities in the sea floor. To maximize stealth, the 212 has a nonmagnetic hull and uses two hydrogen fuel cells to generate power, allowing it to remain underwater for weeks a time (conventional diesel-electric submarines need to surface after only a few days at best), while generating less noise than a nuclear-powered submarine. This, combined with an X-shaped rudder for greater maneuverability, makes the Type 212 a good fit for hunting in littoral waters.

Both Russia and Spain (which have comparable GDPs) have been unsuccessful in their attempts to develop operational AIP systems.

The six new submarines will follow an upgraded “Common Design” model shared by both the German and Norwegian navies, which will also pool together maintenance and training assets. Manufacturer ThyssenKrupp has formed a joint-venture company with Norwegian firm Kongsberg to produce the sub’s combat system.

The 212CD will reportedly have extended range, underwater endurance and speed for “worldwide” operations. Cruising speed is, to be honest, a notable limitation of AIP submarines; while a 212 can sprint at a maximum speed of twenty knots while underwater, if it wishes to remain submerged for prolonged periods, it is reduced to swimming at eight knots (nine miles per hour) or less.

No specific details are currently available as to how the 212CD’s will be configured to achieve improved performance. However, submarine analyst Peter Coates speculates on his blog Submarine Matters that the new model would likely feature greater power generation. While it might be possible to cram a second diesel generator in the Type 212 six-meter-wide hull, or lengthen the boat for a tandem configuration, a more likely solution would be to incorporate a smaller but more powerful MTU12V4000 generator, which is already on the market.

According to the manufacturer, the 1,300-kilowatt V4000 has lower fuel consumption, produces less noise due to a special shock limiter on the rubber mount, comes with a built-in low-emission mode, and can last eight more years before an overhaul is required. There is also a U83 model, which can generate 1,500 kilowatts.

Another improvement that could synergize with improved generators would be upgraded batteries. Japan is reportedly close to installing lithium-ion batteries on its Soryu-class submarines, which might give submerged submarines greater output for longer periods. Alternately, Germany could seek to replace the hydrogen fuel cells—which are powerful, but also complicated and expensive—with methanol-reformer-based fuel cells.

Germany is not expected to receive its two 212CD boats until 2027—which may be just as well, as the U-Boat service has its hands full repairing or overhauling its current fleet, and reportedly has only three trained crews for its six submarines!

In 2017, Italy commissioned its fourth Type 212A submarines, known as the Todaro class. The Italian submarine fleet has been busily engaged in intelligence gathering and rescue missions across the Mediterranean due to the refugee crisis, as well as activities by criminal and militant groups. Like the underwater services of Germany and the United States, the Italian submarine service recently allowed entry to female crew members.

Italy’s four older Sauro-class submarines will be retired by 2022. Rome intends to fully replace these boats with “evolved” 212s, and requested four new hulls in June 2017. For now, it does not appear the latest flight of Italian submarines will be 212CDs; they instead have been dubbed 212Es (for Evolved).

The Netherlands also needs to replace its four thirty-year-old Walrus-class diesel-electric submarines. A service life-extension program designed to keep them operational up to 2025 is already proving costly; you can see three-quarters of the Low Country’s submarine fleet undergoing maintenance or overhauls in this photo.

Amsterdam is looking to spend $3 billion on three replacement subs, and is considering either the Type 212CD or the Swedish A26 by Saab-Kockums. Sweden was the first nation to deploy operational AIP-powered subs, the legendary Gotland class; furthermore, Saab has sweetened its bargain by offering joint production with the Dutch Damens shipyard. However, the Swedish ship maker has not produced new submarines for over a decade (the A26 has yet to enter service), while the possibility for Amsterdam to jump in on the German-Norwegian deal could offer cost savings, due to economy of scale and the fact that the 212 is an established design.

The same question is being posed even more urgently by Warsaw, spurred on by a number of factors: Poland is effectively NATO’s bulwark vis-à-vis Russia, deeply mistrusts its former occupier to the east for historical reasons, and is currently run by a nationalistic right-wing government that has made military expansion a priority. However, the Polish Navy has only three tiny (535-ton) Kobbens-class submarines, built in the 1960s, as well as a single larger Kilo-class submarine inherited from the Soviet Union.

Warsaw has sketched out the Orka project, valued at between $2.2 and $2.9 billion, to replace these obsolete subs nearing retirement with three larger boats, with an option for a fourth. In addition to contesting Russian naval activity around the enclave of Kaliningrad and the Gotland strait, Warsaw wants its subs to possess Submarine-Launched Cruise Missiles (SLCMs) that could reach Moscow from the Baltic for deterrence purposes. As Poland is highly exposed to Russian ballistic missiles and antiaccess/area-denial systems, the idea is that SLCM-armed submarines would offer a mobile, survivable missile platform with which to threaten retaliation and heighten the risks of starting a “limited” war.

Warsaw is expected to declare the winner of the Orka competition this month, choosing between the A26 again (though an underdog), the Type 212CD and the French Scorpène-class submarine, which is powered by the slightly noisier steam-turbine MESMA AIP system.

The somewhat larger Scorpène is arguably less optimized for Baltic patrol, but can be purchased off the shelf with MDBA naval cruise missiles. While the Type 212 could be modified to launch cruise missiles, Poland would likely have to acquire Tomahawk missiles separately from the United States. On the other hand, investing in the Type 212CD project might simplify Polish maintenance, training and supply-chain issues—and the subs might come at a “bulk” discount.

Military procurement typically balances three factors: maximizing bang for buck, often achieved by buying abroad; nurturing the domestic military-industrial-technological base, by buying local; and meeting the specific requirements of a nation’s military, which vary according to doctrine and geography.

It’s striking then that Types 212 and 214 (a larger export variant of the 212 in service with Greece, Portugal, South Korea and Turkey) may be operated widely across Europe in the coming decade, giving rise to a multinational pool of European submariners training and sailing on essentially the same capable vessel. This increasing cooperation European navies is emblematic of a trend which could eventually result in a sort of European Navy, according to one analyst—part of a larger joint European defense project being discreetly patched together by Germany in the wake of Brexit.