Germany Does Not Have One Working Submarine 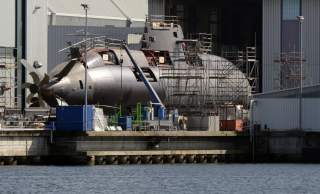 On October 15, the submarine U-35 was performing a diving maneuver off the Norwegian coast when one of the four fins on its X-shaped rudder struck a rock. The damage was severe enough it needed to be escorted back to Kiel by the testing ship Helmsand. The fifty-six-meter-long submarine would have to miss an international exercise in the Skagerrak Strait, scheduled for December.

Underwater collisions are a hazard of submarine operations. Both U.S. and Royal Navy nuclear-powered submarines have run aground in recent years. Repairs are often expensive and time-consuming. But spokesman Capt. Johannes Dumrese told a German publication in October that U-35’s accident had an extraordinary consequence.

On paper, the Deutsche Marine has six Type 212A submarines equipped with advanced air-independent propulsion, allowing ultraquiet operations submerged for over two weeks at a time.

In reality, the Deutsche Marine does not currently have a single submarine in operational condition.

German mariners pioneered submarine warfare in the twentieth century when hundreds of U-Boats ravaged Allied shipping across the Atlantic in the two world wars. However, today’s smaller U-Boat fleet is intended primarily for defense of the cold, shallow waters of the Baltic Sea. The Type 212A submarines employ hydrogen fuel cells that allow them to swim submerged for over two weeks before resurfacing, compared to a few days at most for diesel submarines. In theory, this makes the German submarines ideal for stealthy, short-range sea control and intelligence-gathering missions, while costing less than a quarter of the price of a U.S. nuclear-powered submarine.

However, U-31, the first submarine of the class, had been out of service since 2014. Although repairs should be completed in December 2017, it will take months of trials before it is ready for deployment.

U-32 had suffered damage to its batteries while on route to Norway in July 2017; so far, no berth is free to even begin repairs. Ahead in line for the next available spot in January 2018 is U-34, also in need of maintenance, with no estimated time of completion available.

U-33, meanwhile, is undergoing maintenance through February 2018; then it will require three to four more months of trials. U-36, the sister ship of U-35, was commissioned on October 10, 2017, but will not become operational until May 2018.

The culprit for the lengthy delays? Since the end of the Cold War, the Deutsche Marine ceased maintaining a comprehensive supply of spare parts as a cost-cutting measure, instead procuring parts on demand or looting them from nonoperational boats. This has resulted in enormous delays and accumulated backlog.

Bundestag defense commissioner Hans-Peter Bartels was quoted by NDR as saying, “This is a disaster for the Navy. U-Boats are one of our top capabilities, and I believe it is the first time in their history that none will be operational for months.” One unfortunate consequence is that the submarine crews are completely unable to gain badly needed operational experience. Only by mid-2018 will three German submarines be operational, followed by possibly a fourth that November.

But the kicker is that the Deutsche Marine would not be able to deploy its full submarine force even if all six were in operational condition. According to Bartels, there are only three trained crews available to man the six Type 212As.

Indeed, the German military, which transitioned to being a purely volunteer force in 2011, has struggled to fill its ranks, and has sought to appeal to young recruits with more flexible hours, cozier barracks and childcare facilities. A recent publicity campaign featured one of the female sailors serving aboard a U-Boat, which commentators have pointed out would be impossible now due to the entire fleet being grounded.

U-35 and its sister U-36 were the two latest Type 212A submarines to enter service with the German Navy. But a 2015 Der Spiegel exposé revealed the submarines’ initial deployment proved a mix of farce and disaster.

Deutsche Marine officers were frustrated that manufacturer ThyssenKrupp struggled to correct problems that had been identified in the first four Type 212A boats. During sea trials, U-35’s screw made “strange . . . scraping or grinding sounds” due to being off center, marring acoustic stealth. On its maiden cruise, the radar also repeatedly broke down, until mechanics eventually installed a civilian radar taken from a luxury yacht. At port, a falling twenty-five-ton crane snapped off U-35’s communication mast. At sea, its Callisto communication buoy repeatedly malfunctioned until it had to be withdrawn.

Meanwhile, U-36 was commissioned in 2015—but in reality, many of its components had simply been temporarily fixed into place for the christening. An internal newsletter dubbed it the “Organ Donor,” as so many of its parts, including its snorkel mast, were scrounged to keep U-35 operational.

Low readiness rates afflict other branches of the Germany military as well. For example, Germany is currently expanding and upgrading its fleet of Leopard 2 tanks. However, according to NTV, out of 244 Leopard 2 tanks already in service, only ninety-six are combat-ready, while eighty-nine are awaiting spare parts, seven are devoted to R&D and fifty-three are under maintenance or receiving upgrades. Of fourteen new A400M transport planes, sometimes none are in operational condition; one broke down in February 2017 while transporting Defense Minister Ursula von der Leyen. In 2015, it was revealed that out of ninety-three Tornado strike jets officially in service, only thirty were combat ready.

Both Dumrese and Bartels told media that the policy for obtaining spare parts on demand was being phased out. Thyssen-Krupp will sign on to a new master maintenance contract, saving time lost in administrative procedures, and in “years” a “mature” supply of spare parts will build up in the wake of U-35 and U-36. More generally, von der Leyen has made improving the readiness rates of military hardware a priority since 2014, although clearly progress still has to be made.

Germany’s low levels of defense spending in the post–Cold War era reflect a commendable wariness toward using military force after the atrocities committed by Nazi Germany in World War II. However, as the state with the greatest wealth, population and political clout in the European Union, it will be expected to contribute more to European defense as Moscow presents a more aggressive posture in eastern Europe. Before Berlin can seriously expand its forces, it must build up spare parts and personnel so that it can actually bring majority of the ships, airplanes and armored fighting vehicles it already possesses into combat-ready condition.