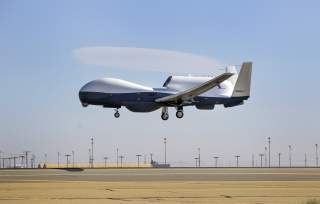 “The State Department has made a determination approving a possible Foreign Military Sale to Germany of MQ-4C Triton Unmanned Aircraft Systems (UAS) for an estimated cost of $2.50 billion,” the State Department said in a statement. “The Defense Security Cooperation Agency delivered the required certification notifying Congress of this possible sale on Apr. 4, 2018.”

The package included four Triton aircraft and support equipment. However, the State Department release also notes that Germany will require American help “to support the integration, installation and functional platform compatibility testing of Germany’s indigenous payload and other related elements.”

That suggests that Berlin will be installing an indigenous Airbus-built signals intelligence package that was originally intended for the ill-fated RQ-4E EuroHawk. Indeed, Airbus will be the prime contractor to the German government “for the development and manufacturing, and will be responsible for the functional test, end-to-end test and installed performance.”

This is Berlin’s second attempt to field a fleet of unmanned surveillance aircraft based on the Global Hawk airframe. An earlier effort called the EuroHawk—which was based on the U.S. Air Force’s RQ-4B Global Hawk aircraft—was cancelled in May 2013 after only one drone was built. Berlin terminated the EuroHawk after it became apparent that the aircraft would not be able to operate inside European airspace—or nation operating under the International Civil Aviation Organization (ICAO) rules—without significant modifications. Those modifications would have required the installation of a “sense and avoid” anti-collision system to meet ICAO certification standards at a cost of almost $800 million.

Germany’s selection of the Triton makes sense because the United States Navy insisted on developing the MQ-4C with robust anti-collision systems and anti-icing systems so that the aircraft could operate over civil and international airspace. That solves Germany’s requirement for an unmanned aircraft that is cleared by to fly inside the national airspace of NATO members—filling a longstanding capability gap.

It is not clear when Germany will formally order the aircraft after the Congress approves the sale or when the aircraft would be delivered. The Triton is set to achieve initial operational capability with the United States Navy in 2019 with an initial version of the aircraft. A more sophisticated “multi-INT” variant is expected to become operational in 2021. The German version with its advanced signals intelligence package will be more similar to the multi-INT version of the Triton.